THE FUTURE IS FEMALE 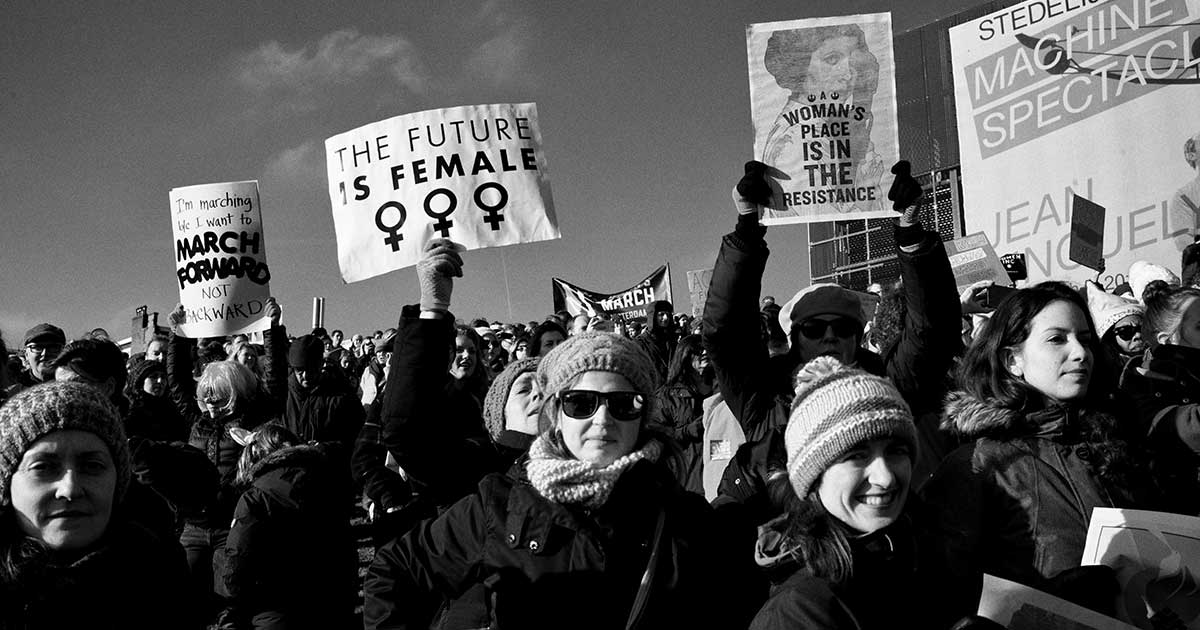 Things feel fraught as we mark the second anniversary of Donald Trump’s inauguration. The government has shut down, everyone is anxiously speculating about what Special Counsel Robert Mueller is doing and when he’ll reveal it, and a dangerously “Home Alone” Trump is lashing out with a spiraling series of tantrums punctuated by the occasional unconvincing teleprompter speech. The malady that afflicts the government is also manifest in the population at large, as demonstrated by the discomfiting spectacle of MAGA-hat wearing anti-abortion teenage boys smirking and mocking a Native American elder, with both camps being menaced by foul-mouthed Black Israelites. The details of that confrontation are fuzzy, but you’d be hard pressed to find a more vivid symbol of how America is atomized and breaking ever-further apart.

But in other respects, these are exhilarating times—and the source of that hopeful joy is the other momentous event that happened two years ago: the five-million strong Women’s March on Washington, D.C. For me, the most indelible memory of that day was the chant that went up as the march started to disperse: “We’re not going away! Welcome to your first day!” We kept that vow, and can now see the results all over our country.

Many marchers went on to devote much of the next two years to resisting Trump’s affronts to our humanity, our environment, and our country. We won some (the Affordable Care Act is teetering, but still stands) and we lost some (I’m looking at you, Brett Kavanaugh…or at least I would if I had a stronger stomach).

We also poured a huge amount of energy into electoral politics: registering voters, canvassing for progressive candidates, and doing our utmost to unseat slimy Republican politicians who’ve been further begrimed by Trump’s foul scat. Some of us ran for office ourselves…and best of all, many won. The current Congress is about one-quarter female, which is unprecedented—not good enough by half, but still…unprecedented. The times they are a-changin’.

But of course, not everybody likes it. The politician who best embodies that change is Alexandria Ocasio-Cortez, or as I like to call her, Allie from Da Bronx (my father grew up there, so hopefully I’m allowed that liberty). AOC is audacious, principled, media-savvy, and to many of us, irresistibly relatable—so no wonder political insiders hate her. It’s not just the usual suspects, like Fox News, which covers her so obsessively it may soon spin off a new network devoted entirely to her. I’ve also heard slighting comments from my own very progressive California congressman, who seems to resent Ocasio-Cortez for dancing her way into Congress and stealing the spotlight while policy wonks like him slogged through the legislative mire for years without attracting much notice. And AOC conspiracy theories abound in all quarters of the Internet. For instance, I recently came across a Hillary Clinton supporter who claims Ocasio-Cortez is an agent of chaos installed by Vladimir Putin, just like Donald Trump.

Women at the Top

Maybe the best evidence of the change in our country is the fact that the majority of Democrats who are officially or unofficially seeking the presidency in 2020 are women. At the moment, there are four of them: Elizabeth Warren, Tulsi Gabbard, Kirsten Gillibrand, and Kamala Harris.

Senator Warren was the first to declare, so she was the first to be attacked. Many journalists and pundits set about the onerous task of determining whether Warren is “likeable” enough, a non-issue dusted off from Hillary Clinton’s runs for office. Professional and amateur commentators alike parsed Warren’s DNA test results, and the way she handled them. Or a beer she drank, and the way she handled that. Warren’s lifelong track record in identifying and fighting the sources of America’s gaping income inequality didn’t come up that much.

When the other three women threw their hats in the ring soon after, they, too, faced criticism. Which is as it should be: When someone of any gender runs for office, both the press and the populace should take a close look, though we should measure candidates of all genders by the same yardstick. And somewhat hearteningly, the focus of the questions and criticism about Gabbard, Gillibrand, and Harris tend to be on more substantive issues, on things they’ve said or positions they’ve espoused over the years. So far, from what I’ve seen, the treatment of these other three women is better than it was for Warren when she was the sole female candidate. The media may still be sexist enough to pick on an individual, but maybe it’s no longer sexist enough to go after a whole pack. Maybe when they run for the highest office in the land, as in so many other areas, women find strength in numbers.

My hope is that now that there are four women currently in the running to become the Democratic standard bearer in the 2020 presidential election, press coverage will move beyond the petty and the patronizing. You know what I mean: “Does she know that pantsuit makes her look dowdy?” “Are the tears that welled up in her eyes a sign that she’s ‘real’…or weak?” And my personal favorite: “She’s too shrill.” (The nation’s standards for a male president’s girth, temperament, and expressiveness are apparently considerably lower, going by the overinflated sociopath currently mangling the majority of words that dribble out of his mouth, including “hamburger” and his wife’s name.)

While the fact that women have broken men’s near-monopoly on presidential aspirations may lessen the kind of sexist swipes that Clinton had to contend with, I fear that the current state of affairs may encourage a new variation on hoary sexist tropes. Only the lowest media sources will stoop low enough to use terms like “catfight,” but I can foresee a bit of “Ooh, look…Kamala just took quite a swipe at Kirstin!” coming our way. Men vying for office get some of that commentary as well—everybody relishes a good fight—but I predict some talking heads will analyze debate exchanges between female candidates with relish usually reserved for bouts of lady wrestling.

But maybe I’m wrong; and even if I’m not, that, too will pass. The future is female. And it looks like it may be emerging right now.