The debut novel, and first in a new exciting series, by Mike Hembury 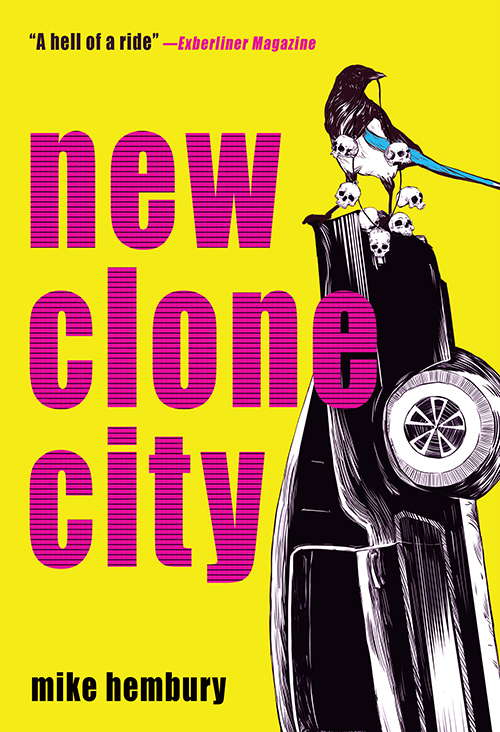 An urban fiction thriller set in a cyberpunk world, New Clone City tells the story of a down-at-heel metropolis. A melting pot of tribes, technology, poverty, and chaos. New Clone City is a rollicking compulsive read, as queer and captivating as its inhabitants.

This is a slipstream world where a refugee crisis looms, the environment is in chaos, and an authoritarian political movement threatens the very fabric of the city. These dark forces battle a colourful cast of heroes, from anarchist rednecks to genderfluid sex workers.

Mike Hembury’s prose is urgent, sexy and “unprecedented”.  Sharp and poetic, compelling and passionate, the political and environmental themes resonate for these troubling times.  This is a novel to be read today.

New Clone City is a lush, multi-layered rollercoaster through an alternate reality—one populated by genderfluid sex workers, anarchist rednecks, and worshippers of the Church of Kali. It’s surreal, unprecedented, and hot as hell.

Bladerunner meets The Girl With the Dragon Tattoo—but with a sense of humanity and humor that’s very much the author’s own. A vivid and compelling exploration of important themes that resonate in our current semi-apocalyptic era. An Amazonian-trans hero, CGI panthers, and steamy sex …oh my! Readers, you’re not in Kansas anymore.

Mike Hembury is an Anglo-Berliner originally from Portland, England. He’s a writer, translator, musician, coder, sailor, environmentalist, and guitar nerd in no particular order. He is the SOAPBOX columnist at The Wild Word magazine. You can follow Mike on Twitter here:
twitter.com/schnappz

1. What was the inspiration for New Clone City?
The events of the first chapter – with the naked hipsters on the street – actually happened to me, and I took them as the basis for a short story. After that, the project took on a life of its own.

2. Is it true that you wrote during NanoWrimo?
Yes, I did a considerable part of the writing during NaNoWriMo, but that wasn’t enough to finish the book, so I carried on at the same pace for another month.

3. New Clone City is a slipstream universe, but is it inspired by a real place? Can you give us a hint where?
Shhhh, it’s a secret! Said in my best theatrical whisper. But if I had to give you a hint, I would say the best thing to do is to treat the title as a kind of crossword puzzle clue.

4. You have a full-time job, play in three bands, write an environmental column, how and when do you find the time to write?
That’s a good question. Sometimes there is so much other stuff going on that writing has to take the back seat. So I have to actively work writing time into my schedule. Like, a week here, or a month there. It’s difficult, but it seems to be the only way at the moment.

5. What are you working on now?
I’ve been working on a collection of short stories and a sequel to New Clone City.