THE BOTTOM OF THE HILL 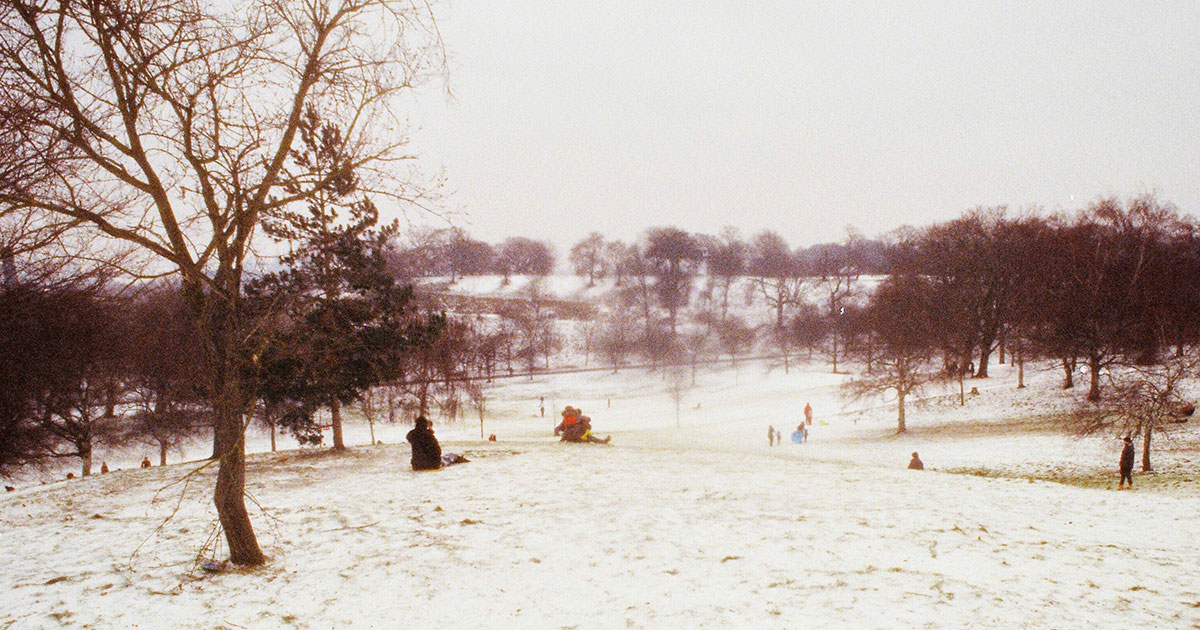 When I was a kid, we lived at the top of a big hill. The world sloped down below us, to a flat valley bordered by a lake—The Lake, our overgrown stock pond, where we grew catfish and buffalo fish to sell in our fish shop. A bunch of neighborhood kids would climb up from the neat houses clustered around the back foot of our hill, those not too scared to venture into the pasture, what with all the rumors about our father shooting at strangers.

We didn’t own a sled. What we’d do, is go to the local tire shop, which also repaired tractor tires. We’d get an inner tube from a big rear tire and have them inflate that to use as a sled. I think this was my sister’s idea. The guy who ran it wasn’t too keen on selling them to us, but there were always plenty of drunks around the farm we could bribe or convince to buy one for us.

The inner tubes were huge. Several kids could fit in one, knocking heads when it flipped over on the way down. This was partially why I was always afraid to do it. One kid ended up slipping underneath one and sliding down on his face, his sister still in the inner tube above him. Later I got into a fistfight with the same boy over something I only realized was stupid after he started swinging, and I held him in a headlock while he struggled impotently until he calmed down.

To me, these kids seemed like patrons come to see the carnival show that was my family. I was embarrassed by the cheapness of my clothes, the alienation I felt from these kids. It was hard for me to make friends in the neighborhood below us because I was afraid to bring anyone home. What if Mom freaked out and started yelling at them or throwing things? This was a reasonable fear. What if Dad was drunk (Dad was always drunk) and started ranting? I didn’t know how to move in the world I imagined these kids inhabited. When I did go to one of their houses, I was uncomfortable, afraid I’d dirty up their nice things with my presence. No one cared what I did as long as my sister was there, but I was sure they all thought I was weird or something worse. So, I rarely rode the inner tube, because I was afraid I would embarrass myself somehow. Maybe I would be scared and show it, or maybe I wouldn’t make it very far into the valley. I rode it on the smallest part of the hill, but not the big end where the older kids went. I imagined I would come out some day, alone, and practice so I could be as good at it as Keith, a family friend’s son who made it all the across the valley and onto the frozen lake beyond. It took him several minutes to crawl back across the unreliable ice. We all watched, sure he would fall through and die before we could get help. But there was never a time when it snowed that kids weren’t there, sledding. Even if I got up early and went out, they were already there.

I felt a similar outsider status when we went to town. America can forgive a person of anything except being poor. There were restaurants, there, that I assumed wouldn’t let me in the door, as though they had an alarm that I’d set off by trying to walk in. They had tables, not just a bench out back to sit at. I went to one of these fancy places, once, with my sister, when I was a teenager. It was just some pizza place, but I felt underdressed, in my jeans and tee shirt. It bothered me that the waitress brought our food; I thought she would be mad that we didn’t get it ourselves. My sister had to stop me from getting up to go get things like napkins or a straw. When my sister left a tip, I eyed it all the way out the door, amazed at her generosity in leaving money for a stranger. Wouldn’t that charity make her feel self-conscious? These were mostly chain places that I probably wouldn’t go to now; in fact, these days the cement-floored places with the bench out back serve much better food. People stand in lines around the block to eat at places like this. But back then, I didn’t have that perspective.

I remember the first time I went to a clothing store that wasn’t Walmart. It was in my late teens. When someone asked if I needed help, I almost left, figuring they thought I must be stealing. But leaving would just make them more suspicious. I looked at shirts that didn’t have logos on them, jeans that weren’t the cheap blue of Tough Skins, a polo shirt, a button-down shirt; these were clothes that I would honestly consider casual, now, but at the time, they seemed decadent. After I bought them, I was afraid to wear them; someone might see me and realize I didn’t belong in them. My friends might think I was putting on airs.

Back then, terms like “code-switching” or “imposter syndrome” weren’t really part of the lexicon. When I was growing up, I had a thick Arkansas accent. It’s not sexy in the way a Georgia accent might be, or exotic the way a gentile Southern aristocrat might speak. It didn’t even have the musicality of a Mississippi accent. It was just plain. I worked hard to lose it. I didn’t want any trace of my roots to show. After I went off to college, when I returned to my hometown, no one recognized me. Occasionally, they treated me like that most dreaded of things: a Yankee. I was thrilled.

My favorite character in the novel Tom Jones is this French Lieutenant who never really learned English. But he had been in England so long that he didn’t remember French. He existed in this liminal state between the two languages, the two cultures. In many ways, I came to realize that, by rejecting the culture of my childhood—not just the poverty, but the oft overlooked positive aspects, like adaptability, frugality, community—I became a person between world, like the French Lieutenant. I never fit in with the clean world, the fancy restaurants, the fancy clothes. But I didn’t fit in back home anymore, either. Classmates might brag about reading books even they didn’t enjoy; family members might complain about political situations that didn’t exist and that they didn’t care to understand.

What I wish is that I could go back to that hill—mostly to see my sister again, before the hardness of life robbed us both of so much. But also, to get another chance at riding that inner tube down the biggest part of the hill, of feeling, just for a little while, like a kid, just having fun, not thinking about what might happen next, just whizzing through the world to the whatever lay at the bottom of that hill, and beyond.