Our IS ANYBODY OUT THERE? Artist-in-Residence is the writer and artist Donna Steiner. 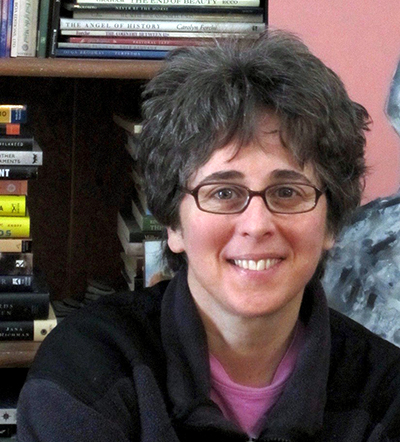 Donna Steiner’s essays and poetry have been published in literary journals including Fourth Genre, The Bellingham Review, The Sun, Full Grown People and The Manifest Station. She teaches literary citizenship and creative writing at the State University of New York in Oswego. A chapbook of five essays, Elements, was released by Sweet Publications. Her paintings will soon appear in Lunch Ticket.

Inquiries about purchasing the paintings may be made directly to the artist. Please write to her at donna.steiner@oswego.edu. 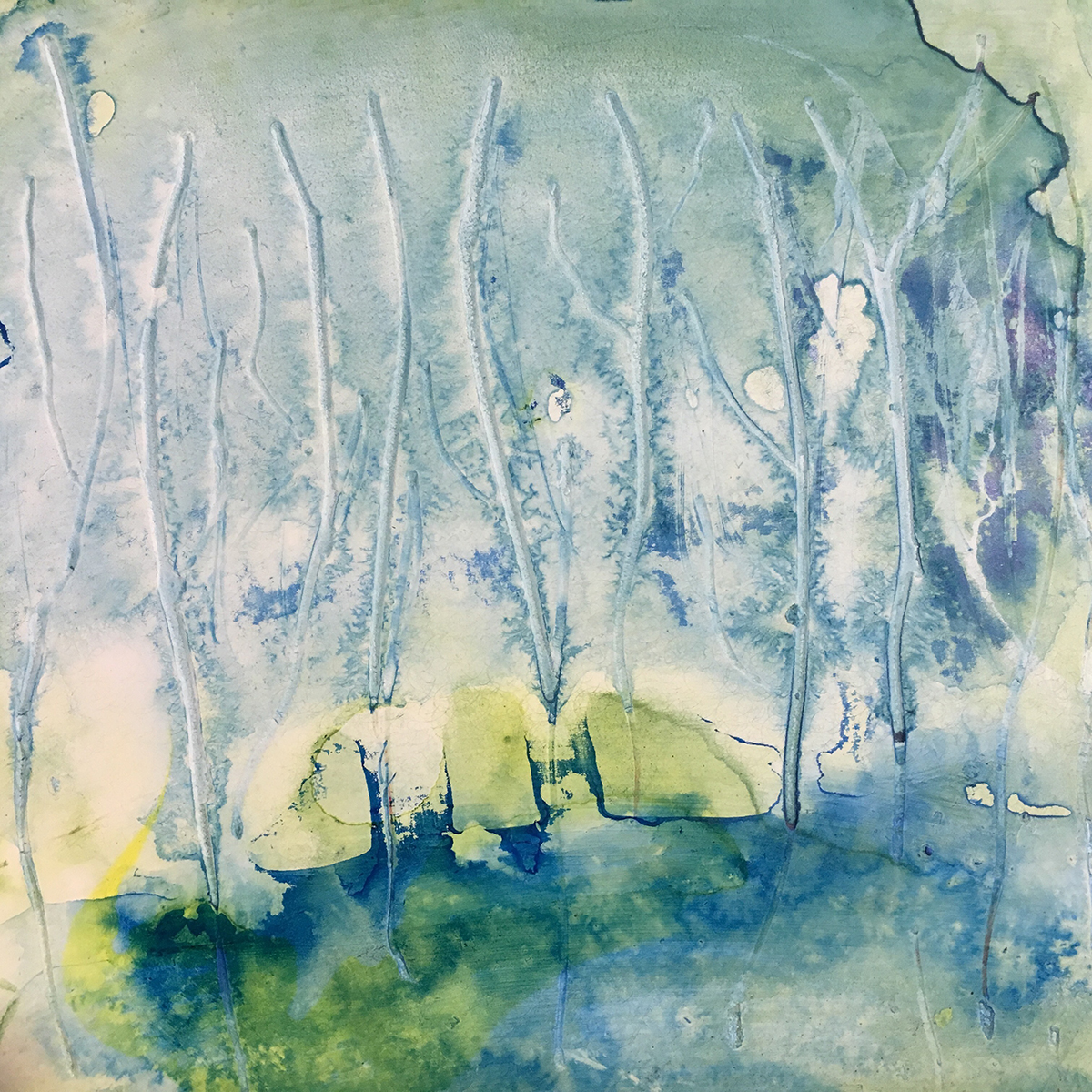 I have been a writer for almost four decades, but about a year ago my parents died and I began painting. The speed with which we lost them – just 43 days separated the two deaths – left me reeling. Although I kept writing, my efforts were stenographic; getting words down was the extent of the ambition, and I found little joy in rhythm or metaphor or theme. I made marks on paper, I tapped marks from keyboard to screen, but they were perfunctory and graceless.

Not writing, or writing very little, was not acceptable; there was energy in my body that required expression.  A wise and generous friend invited me to her studio and set me up with a big table and art supplies. “Make something,” she said. I started wrapping thread around branches, building small, broken, half-mended creatures. 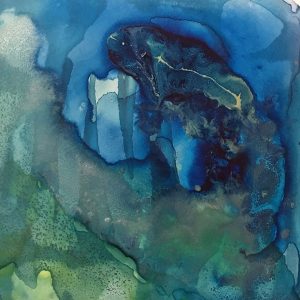 Weeks later, when I ran out of branches, on a day when I felt brave, I started brushing water and ink on clayboard. To me these were maps of the ocean, where my parents live now, and I painted blues and greens exclusively for many months. Most of the paintings were abstractions, but occasionally I scratched the outline of a squid or a fish into the surface of the board. I was creating a world for my parents, a home, and finding ways to communicate the magnitude of the loss.

When I was in the studio, time collapsed, sound collapsed, anxiety disappeared, grief abated. All that mattered was the physicality of standing at the elevated table, watching one color bleed into another. The ink was appropriate – my mother was a frustrated writer, my father an amateur painter. Both of them were master letter writers. Dissolving ink into water also felt significant. Not only had my parents’ bodies been cremated and their ashes released into the Atlantic Ocean, but the beach was our childhood home away from home; we grew up on the Jersey shore and there is still no place I would rather be. 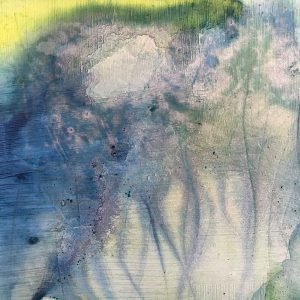 My work in the studio engaged me when nothing else did. Painting became my second art.

There is tremendous freedom and comfort in not being expected to do something “right.” In learning a new art, I feel none of the pressure of convention, can relax into the process and move with abandon. That is not to say my studio time is frivolous, for although there are elements of play, my work there is intentional and intellectually engaging. 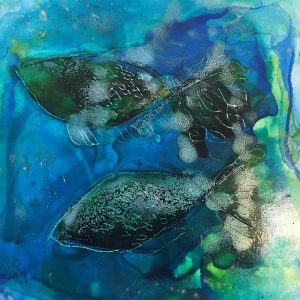 There is satisfaction in abstraction, in allowing the materials to tell stories that I cannot tell with words. There is pleasure in creating beauty, in observing the chemistry of paint and water and heat and gravity. There is control and absence of control, and confronting that dichotomy is cathartic. When I scratch the surface, actually use tools to cut the surface of the clayboard, it is also metaphoric – I am scratching the surface of emotion, of the body, trying to release something that has no other release.

And there is the discipline of patience – I literally watch paint dry. I watch particulates attract or repel the substrate, I watch ink gravitate to a corner that is microscopically lower in elevation than the rest of the board. 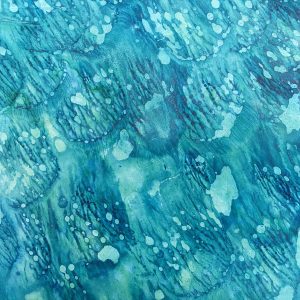 In my second art, everything has an irrevocable impact. If I choose to alter a painted surface, I have to say goodbye to what is in front of me. There is no way to get it back.

That is a lesson that I need to learn every day. There is no way to get it back. 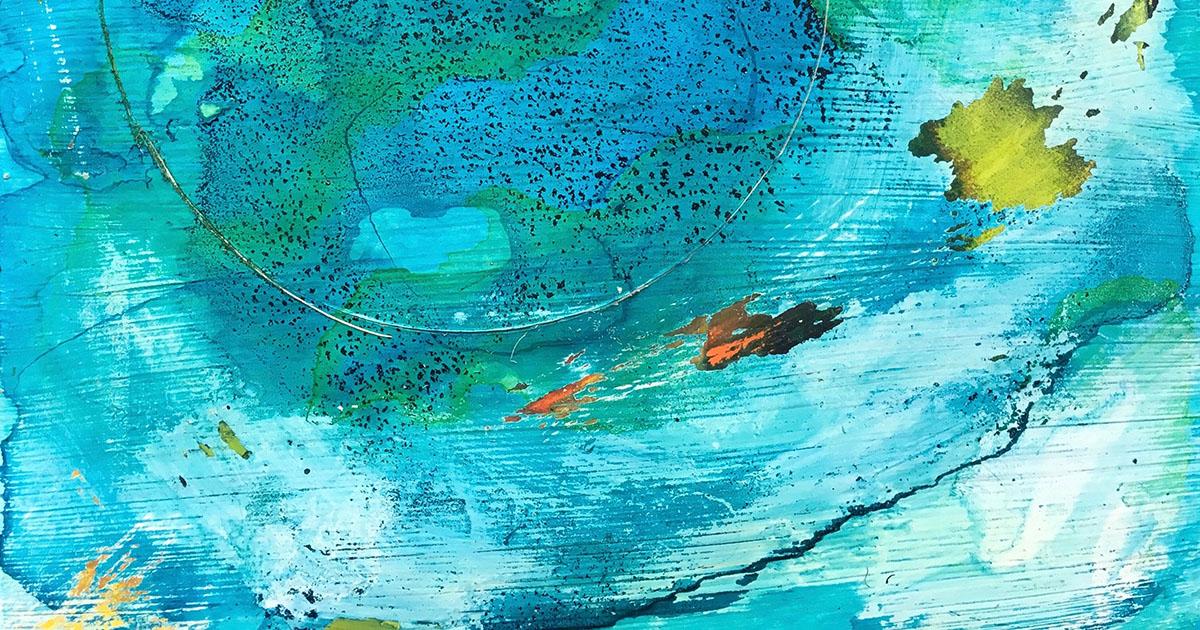 These little globes remind me of antique maps. I start by painting the surface; when it’s dry I add a layer of gesso or wall primer. When that layer dries I add another layer of paint, but before it’s dry I rub the surface—it takes a good amount of pressure, as will be evident from the torn rags—until some of what is underneath is exposed. The reduction process is very physical and feels much like scratching the skin until a wound opens. Any child who has ever picked a scab knows the catharsis; rubbing the paint off is much the same. 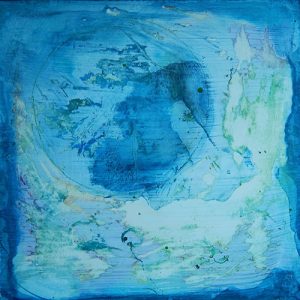 Perhaps making the globes look old evokes a sense of loss. We’re living in a time where, for many of us, things that once felt familiar, even reliable, now seem jeopardized. Perhaps we have always lived in a world that holds its secrets below the surface. 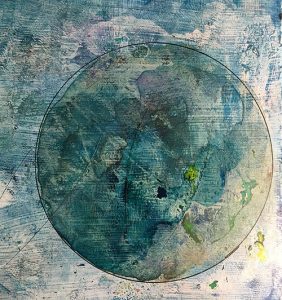 What interests me is creating and erasing simultaneously. It sounds very basic, but there is something about this negotiation that feels necessary and instructive. The effort of physically scraping a layer of “skin” off a painting leaves my fingertips sore, leaves the tools of this effort torn but elegant, and allows me to contemplate how to create in an era of perceived diminishment or destruction. 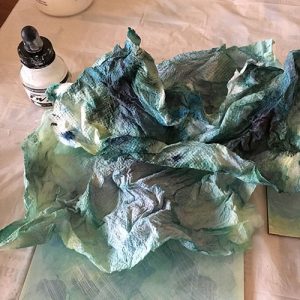 Making art is inherently hopeful to me—“practicing hope,” in effect, is built into my process. And I think I am drawn to things that feel incomplete, or even broken or damaged. My paintings feel like that to me—there are gaps, there are reductions, there are places that feel undone or exposed or hidden. Maybe those gaps, those real or metaphorical spaces, are places for someone else to enter the work. It’s like clearing a space on a park bench for someone else to sit. It’s like opening up an old map and saying come on, let’s figure out where we’re going. 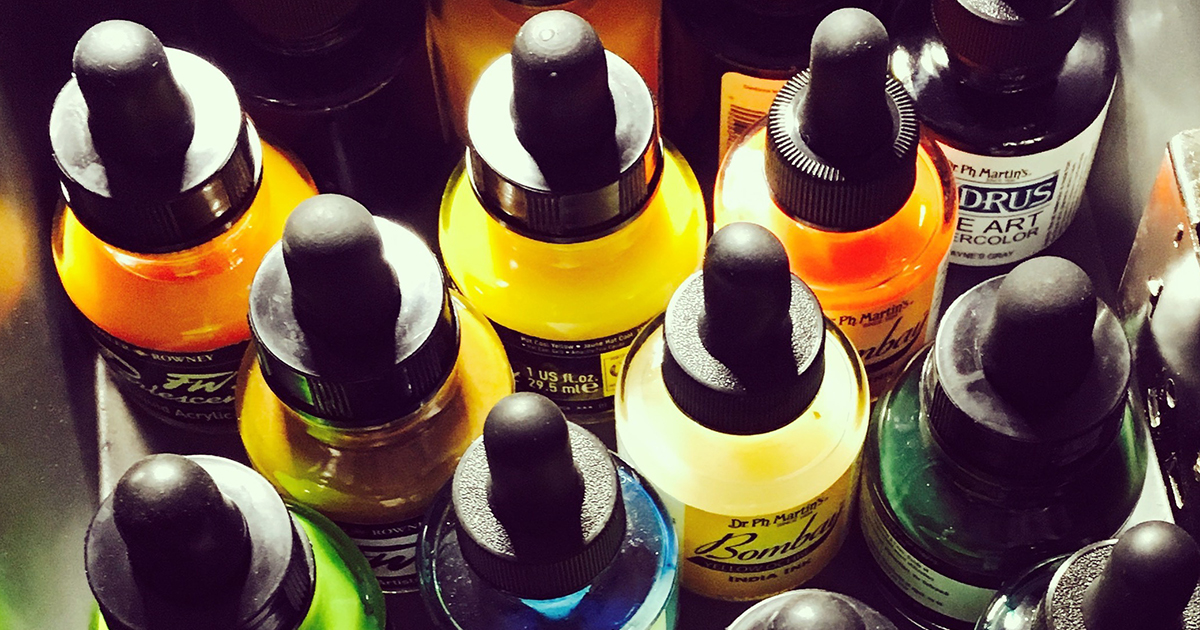 I live in a place that is stunningly beautiful but also isolated. Winters on the shore of Lake Ontario can last six months, and we contend with a massive amount of snow and extended cold.

There are days when visibility is more a concept than an actuality, days when I may not see another human being. 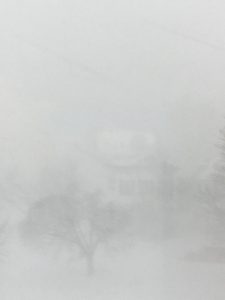 Actual view out my apartment window, during snowstorm.

My friends are the pigeons who perch on the neighboring church, the school crossing guard I see walking to her post in the dark hours of the morning, the snow plow drivers who clear the road. 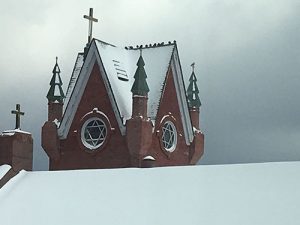 When going outdoors is a poor option, I work inside. I write, I paint, I photograph the paintings. I photograph the inside of my apartment, close-ups that become almost abstract, images that look like they are on the verge of either disintegrating or coalescing. 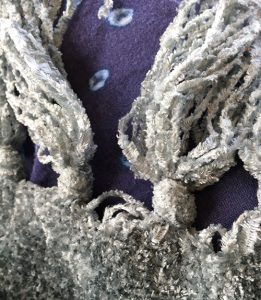 During the winter, when the sky is gray with heavy clouds and just about every surface is white with snow, I crave color. It’s like craving fruit or Vitamin D – I NEED color. 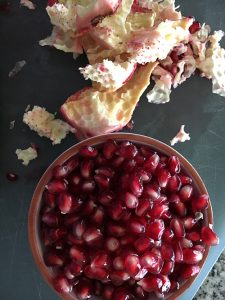 I bought this pomegranate just so I could see the color.

Although most of my recent work sticks to a blue and green palette, in winter I experiment with yellows and oranges.  I leave those bottles of ink out so my eyes can soak up their light. It is a little like sun bathing.

And if the colors I find are not enough to warm me, I wrap myself in the brightest blanket I can find and wait until new words come, or new images, or – if I am lucky – the sun itself makes an appearance. 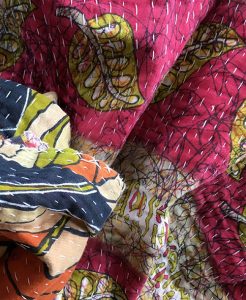 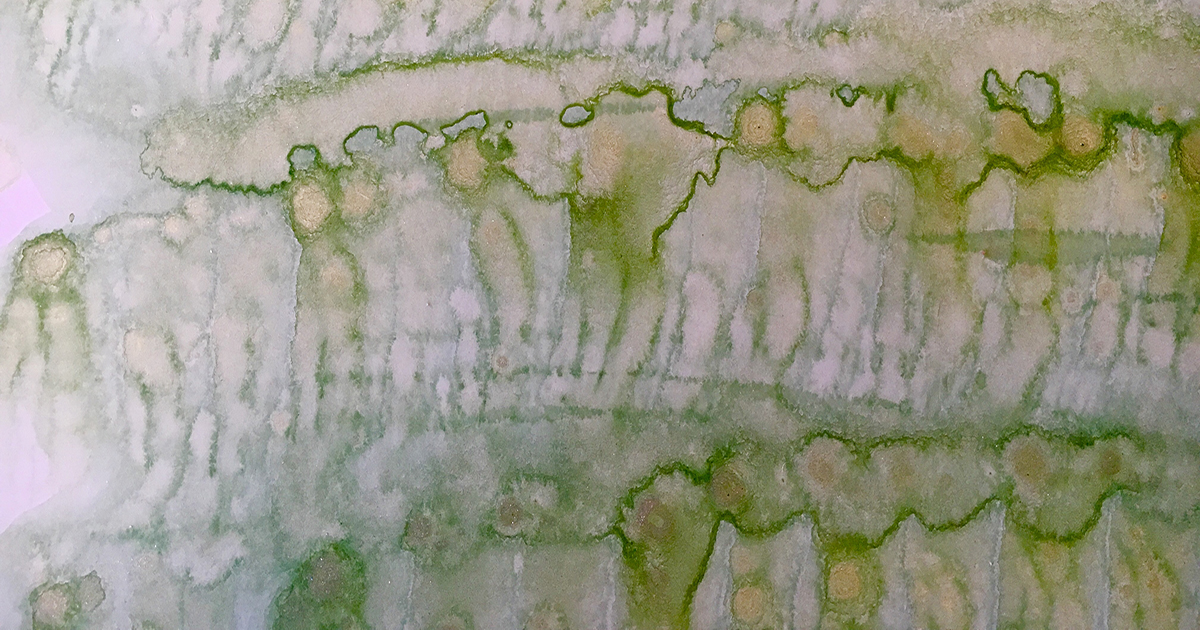 Is Anybody Out There?

Sometimes when a painting is complete, I feel like I can see a place where something is somehow alive, a kind of skeleton or ghost that is stunned in the ink or, on occasion, almost seems to be moving through the painting.  Although I have never believed in ghosts, I also have never NOT believed in them. 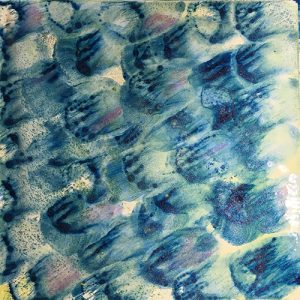 Look at the lower right quadrant – a little white skeleton…

I loved reading the poems in this issue of The Wild Word. There are ghosts and aliens, there is an intergalactic language with “some interesting alphabet sounds.” How can we resist not speculating about other dimensions, other lives, how can we resist revisiting concepts or beliefs we’ve long held as fact?

I wonder if the very acts of speculating and imagining are more important now than ever, as we witness growing intolerance of anything perceived as “other,” as “alien,” as Not Exactly Like Me. 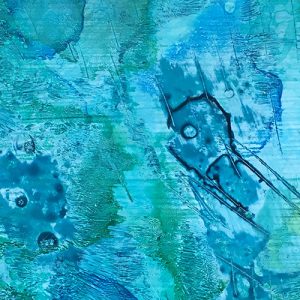 Maybe that’s something this second art has given me—a deeper sense of opening, of consideration. Whether making marks on paper or on a screen, or using a paintbrush to swirl ink, or a camera to shift or freshen or refine an image, when I physically handle the materials and tools of these arts I am closer to what matters.

It can seem, quite acutely, for those of us attempting to share creative work, that nobody is listening, nobody is noticing, nobody is out there. Submitting one’s writing or putting one’s art out there – isn’t that what we literally say to each other– “you’ve got to put it out there” – can feel like exercises in futility. But when the world itself seems precariously tilted, when loss is a tidal wave of grief, when joy – yes, joy – falls on my shoulders as lightly as a bed sheet wafting down, I am so lucky to have a set of brushes and pens, I am so lucky to have friends who say “make something.” I am so lucky to have an ocean of memories, and time, and faith. 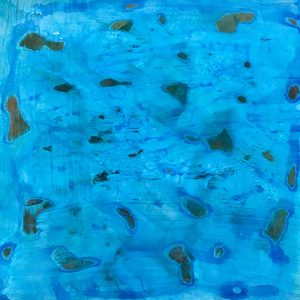