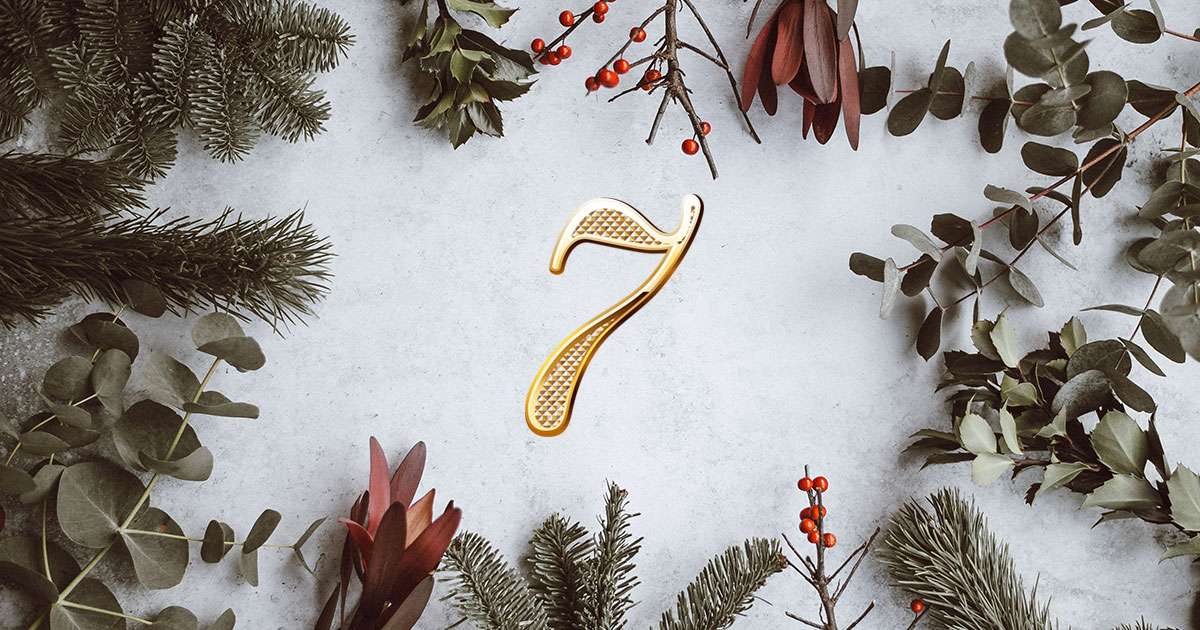 In yesterday’s advent calendar, Joe finds out more about his mother’s love-life than he had bargained for. If you missed it, read Day 6 here.

“Holly!” Marie and Joe shouted simultaneously. “Come away from there,” Joe ordered, fear catching in his vocal chords. His dad-appropriate protective reflex kicked in and he moved swiftly towards Holly to scoop her up – and again yelped, convulsed and fell forwards on top of her.

Except Holly had good reflexes, too, and she dodged the toppling mass of her dad by rolling over and across Santa. And, she considered (shifting a shard of glass from below her knee that was mercifully curved downwards, away from her skin, so that it hadn’t cut her) that Santa didn’t feel like Santa should have felt while you were rolling over him. The real Santa – not the department store or school bazaar or theme park variety – shouldn’t feel like he had a rolled-up duvet inside his coat. There was also something oddly muscular about him that she didn’t think quite fit the bill. Although, if you were always carrying around big sacks of heavy toys and chocolates and electronic gadgets, not to mention reining in flying reindeer, you would mostly likely develop some kind of arm muscles. But he felt tough and sinewy below the duvet – not at all the soft, wobbly kind of feel Granny had. It was true that he was an old man and not an old woman, but still.

In the seconds that her father lay on the floor next to Santa’s body – again – clutching what was formerly his unwounded foot and swearing through his clenched teeth, Holly briefly took stock. The problem with adults was that they always thought everything was so complicated. But the situation was fairly simple: was this Santa, or not?

And now that she was up close, she was having her doubts about whether he was what he had seemed to be. He seemed too real, too much like just another person but dressed up. His beard, she could see now, was far too white and flossy. She had seen beards – her dad had grown one once until her mum had finally made him shave it off (and right she was, too) – and they weren’t soft and wavy but really bristly, scratchy things. She had already noted that he felt very much like a proper human, maybe even a human who goes to the gym regularly.

And, finally, the real Santa doesn’t die. Santa had been around for hundreds or maybe thousands of years, who knew? After all those years of benevolent gift-giving, he wasn’t going to die here, bleeding, on their sitting-room floor. The odds were way against it. And what else were all those years of being super-human for?

Holly wasn’t sure that the man on the floor was dead, but she was pretty sure he wasn’t Santa. And because Santa was kind of extra-human – living for centuries, getting up and down chimneys – not bound by other human rules, she didn’t think he was likely to die so easily. Maybe Santa might get a knock on the head, but surely he’d just get up after a while, have a bit of a laugh and keep going. But this man here, he hadn’t moved for ages. So probably he wasn’t Santa. And he could possibly die on their sitting-room floor. So he needed a doctor. And that’s what they had to do.

Unfortunately, the other problem with adults was that they didn’t listen.

“You need to call a doctor,” Holly stated the obvious.

But nobody heard her over Dad’s yelling. Lucky for him he got another piece of glass in his foot. It gave him an excuse to shout and swear.

“Hold still!” she yelled back, trying to get a trip on his ankle as he kicked it the air. “Just let me see!” Marie managed to wedge herself in a position where Joe couldn’t kick and grasped his foot. “It’s just a small bit,” she said “Hold still, I’ll pull it out.”

“Leave me – aarh!” Joe yelped again as Marie plucked a needle-like shard from his foot.

“He always was a hypochondriac,” Granny commented.

“You need to call a doctor,” Holly repeated.

“Did you ever get your tetanus booster?” Marie asked him.

Joe rocked to his feet and stood up. “Call the guards,” he said. “We don’t know who this man is and he’s broken into our home.” He looked down at him. “Maybe we should tie him up, just in case.”

“First you kill him,” Granny accused, “then you want to truss him up! What did he ever do to you?”

“WHAT ARE YOU TALKING ABOUT??” Joe roared.

“Isn’t it obvious? You don’t approve of my boyfriend, so you hit him over the head with the whiskey bottle. There are the broken bits everywhere to prove it. You’ve been stepping on them.”

But Joe didn’t finish his sentence because he was blinded. They all were. A huge bright light burst through the window.