WHERE I CAME FROM 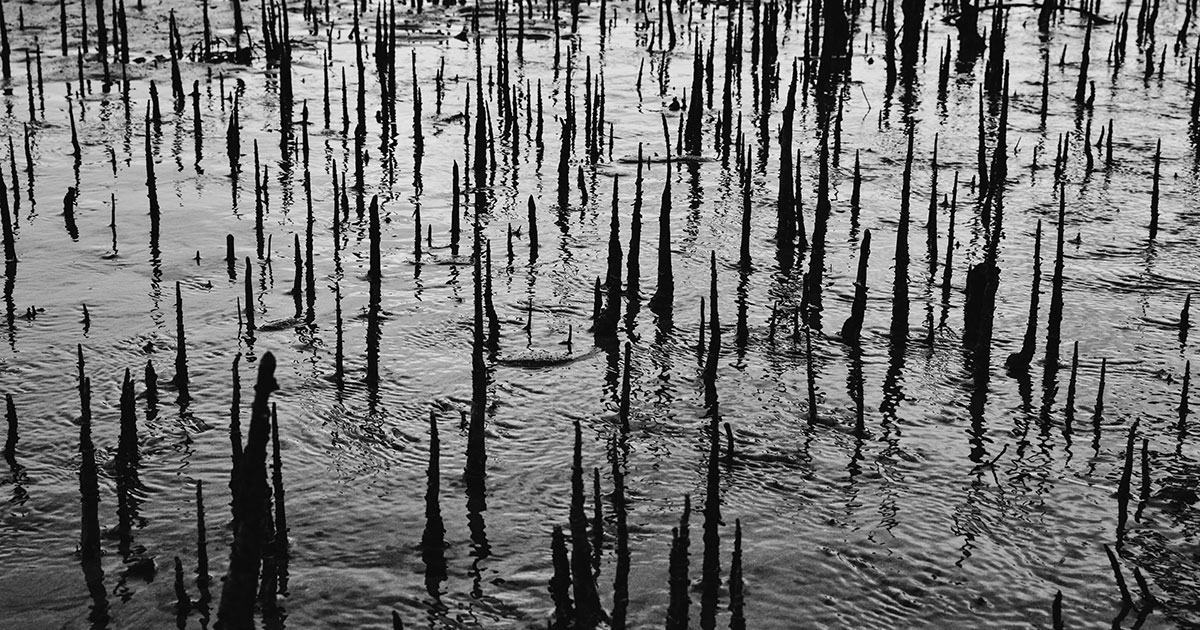 A common creation myth is that people were made out of clay and shaped into our present form. I like to think of it as mud. I grew up on a rice farm, and mud was our life. We grew crops in it. We waded through it to tend those crops. Much of the land around us was swamp, and a fixture of my childhood was riding with my father past old houses raised on stilts from the flooding that used to occur regularly, and still sometimes did.

The fields were rife with mosquitoes. Often times, it felt like a curtain of squirming bugs to push aside so you could get through, I’m only slightly exaggerating. I will say that if you’d been away for a while and came back to the fields, the mosquitoes would soon turn your uncovered skin into something like leather from the swelling and bumps.

The farmland was flat, baked under the Arkansas sun, bordered with ditches that might hide water moccasins, turtles, who knew what. The highways were raised on long, straight mounds, so when you drove them, rice field levees rippled past like something running to catch up to you.

The land smelled of mud, of course, a soft, wet, rotting richness under everything, and this mixed with the sweetness of rice plants, the hard tang of Off!, and occasionally the chemical scent of oil from the tractor.

We lived on a ridge, though, that rose above the mud. We had gravel, which we sold to be mined and hauled away. In a very real sense, we sold the land beneath our feet. We had a pasture full of grass nipped short by cattle. They tore the heads off the grass blades and ground it between their teeth, the sound like a child walking on gravel. We had pecan trees dropping branches in the front and side yard. We’d gather the pecans up in big black trash bags to hull later.

There were trees everywhere to sweeten the air. Down the south hill, a big lake where we raised catfish and buffalo fish. In the fall and winter, the smell of mud and dying fish rose as Dad and them seined for fish to sell. Cattycorner with that was the gravel pit, and past that was the barn where we rounded up cattle to vaccinate or haul off to sell. They used to make moonshine in the barn, years ago, back when the family raised grapes for the vineyards in the mountains in the western part of the state.

The fish are no longer being raised or sold. The cattle were all sold off. The grass grows wild, now. So many of the trees have died from lightning strikes or various things. The gravel is starting to grow over and be reclaimed by nature.

My most prevalent memory of childhood is watching my father’s red-burned face, black hair hidden under a Riceland cap. He kept one hand on the steering wheel and the other thrown over the doorframe where the glass of a window might not come up, no matter how hard you cranked it.

The truck was full of dust from the open windows. It coated everything. Dad kept a roll of paper towels on the seat, and every so often, he’d wipe the windshield with them so he could see. He might have the radio tuned to the only station in town, which played slow country music or even slower people talking about crops or what have you. He never paid attention to it, though. Never sang along or cranked it up, the way my brother did.

The back of the truck was full of tools, grease, and mud. My whole life, I never saw my father clean a truck. He kept a cooler in the back, full of beer and ice that melted under the Arkansas sun, so after mid-day, the ice would have melted, the cooler now full of water. When he finished a beer, he’d toss it in the back. My brother and I gathered them up every so often to sell for recycling.

My father never waved if he passed you in his truck. I think it was because he didn’t see people. He was always looking somewhere far away, toward a horizon that never came; out past the rice fields, the rare house or grain silo, out somewhere I couldn’t see. Maybe he couldn’t either. Maybe that’s why he kept looking.