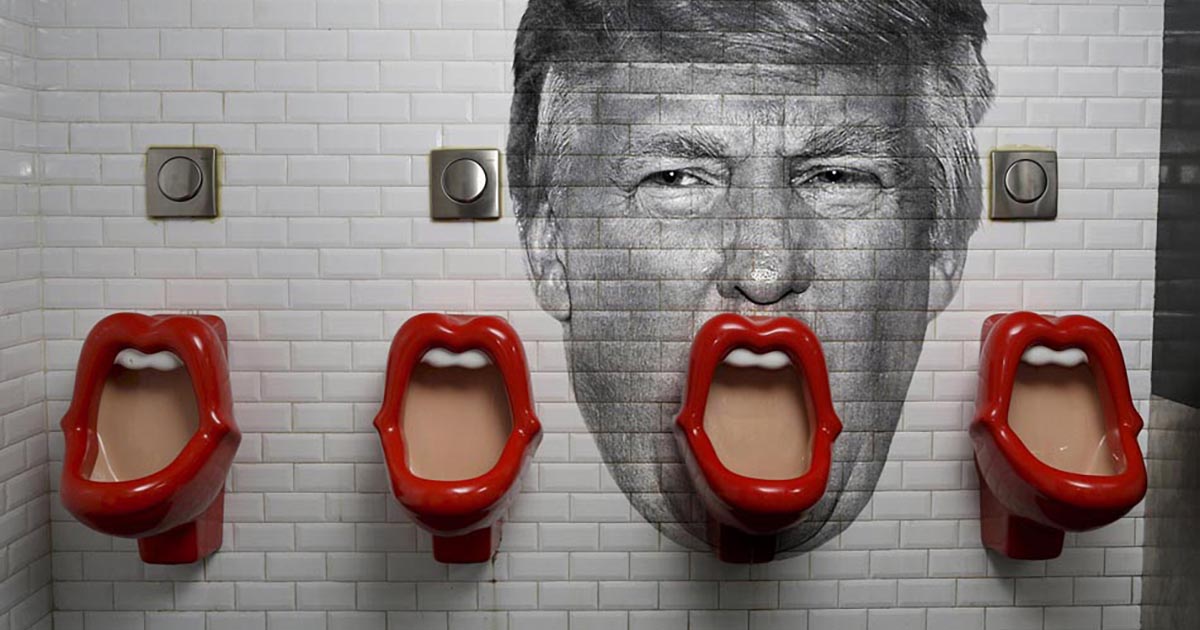 Pretty much every month, the drill is the same. I put off writing this column until the last minute, having learned the perils of early pronouncements on the swirling contents of the toilet Trump has made of the U.S. government. I’ve had to scrap a few columns that focused in on one turd (say, Trump’s attacks on immigrant communities) when some new foulness (for instance, his attempts to undermine the rule of law) demanded attention with its alarming stench.

When that happens, I scrap my original column, sigh, and start a new one.

The other reason I wait until the very last moment to write this column is that each and every month, some childlike part of me feels certain—certain—that a hammer (from Thor, from Special Counsel Robert Mueller, or from outraged Mother Earth herself) is going to come down and smite the hell out of Donald J. Trump. Why should I subject myself to the distasteful task of picking through nuggets of his scat when, if there’s any justice at all in this universe, Trump will be whisked out of the Oval Office and off to more suitable environs, such as jail or hell?

I’d much rather write about that.

Alas, the clock has ticked down to the moment when The Wild Word’s editors will soon abandon me for lost, so here goes, although I’ll admit to feeling unusually dispirited. Not only is Trump still in the White House, but despite Stormy Daniels’ account of his wan vanilla sexual predilections, he remains in an insanely acrobatic position for a man of his age and nonexistent morality: on his high horse.

With the rigid message discipline that’s a perk of limited intellect, Trump is sticking with his “witch hunt” characterization of Mueller’s investigation into foreign intervention in the 2016 election that foisted him onto a largely unsuspecting populace. For Trump and his minions, it doesn’t matter that there is now evidence that Russia wasn’t the only country that viewed him as a useful idiot and cultivated the man and his cronies accordingly.  And apparently it doesn’t matter that those foreign entities may have bribed or blackmailed Trump and his peeps—a process that may well be ongoing, which would explain the administration’s repeated refusal to condemn Russian misdeeds, not to mention the policy flailing on Qatar and Saudi Arabia. In the mind of Trump and his supporters, it’s not the enormity of the possible corruption and even treason that’s worrisome. No, it’s the idea that the FBI or another law-enforcement agency may have actually had the temerity to look into those possibilities.

In what context would law-enforcement agencies not pursue credible charges of treason and corruption? In a banana republic—which is what the United States has become. And I’m not talking about the cuddly kind of banana republic, with lots of rum drinks and a crooked but still fairly benign leader. As we’ve known since Trump kicked off his presidential campaign with fear mongering about Mexican rapists and jokes about shooting people on Fifth Avenue, he’s pretty much the definition of malign.

Like the cancer it is, Trump’s malignity is spreading throughout the American body politic. Just this week, Gina Haspel, who oversaw waterboarding and other “enhanced interrogation” tortures at a black-site prison, was confirmed as the director of the Central Intelligence Agency. And conservatives on the Supreme Court set labor rights back decades with a decision that prevents employees from banding together to seek class-action justice when they believe employers have harmed them.

Except for people like Vladimir Putin (who’s succeeded in subverting American cohesion and power beyond his wildest dreams), the rest of the world is trying to fight off the infection Trump is spreading like HPV…or is it or HIV? (As Bill Gates tells it, the leader of the free world isn’t sure which is which.) Europe is trying to preserve the deal limiting Iran’s nuclear program, and an international coalition is striving to keep the Paris climate accord alive. But each day that Trump is in office, more harm is done: to national and international institutions, to idealism and decency, to common sense and sanity. If you’re not convinced of that, take a look at the recent New Yorker article that delves into the echoes between American and German racism—and between Trump and Hitler.

When I first started writing about politics, Trump was a joke: indeed, he was most commentators’ favorite punch line (as that chilling New Yorker piece points out, the same was initially true for der Führer). But now that Trump’s malignity is metastasizing—and when henchmen like Rudy Giuliani are publicly threatening to rip apart Robert Mueller and others in the Special Counsel’s office—I’m not laughing anymore. And you shouldn’t be, either.