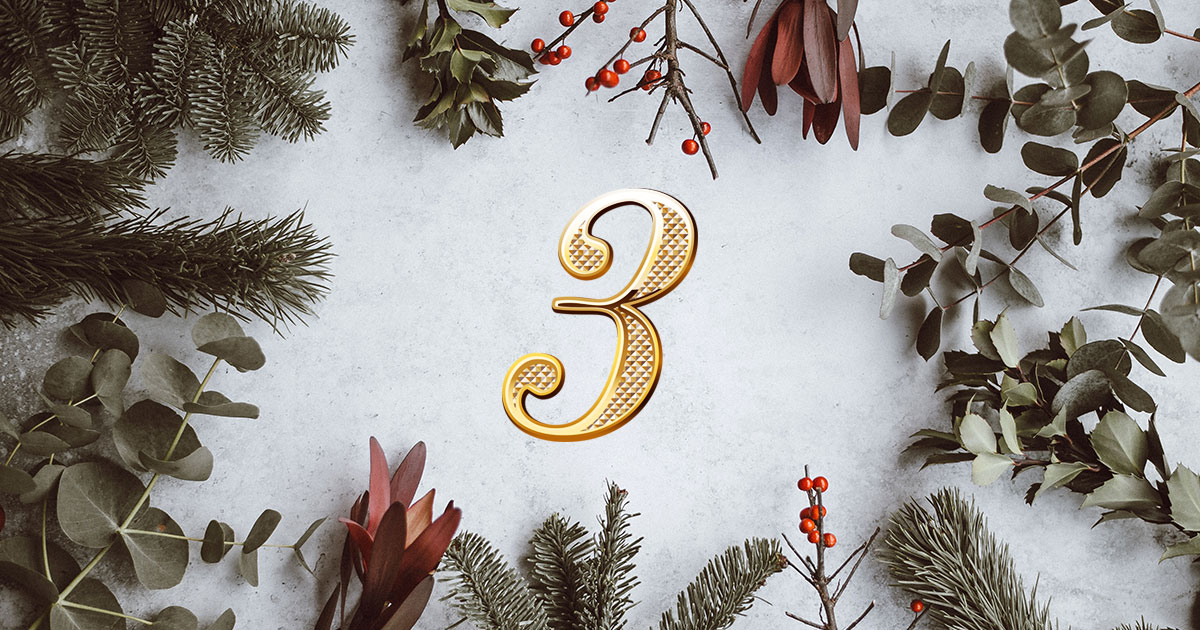 In yesterday’s advent calendar, Noel worries that the body lying prone under the Christmas tree is his dad. In case you missed it, read Day 2 here.
Episode 3: Red isn’t just the colour of Christmas
“FUUUUCK!” Dad howled and twisted on the floor next to Santa.

Holly and Noel stood, rigid with horror, watching their father writhing on the floor for something that seemed like a very long time. Holly was aware that she was thinking Santa must be dead, because how could he stay asleep and unmoving like that while her dad screamed? She became aware, too, how strange it was to be thinking something like that when something needed to be done. She couldn’t move.

After what seemed like hours but could as easily have been microseconds, Noel screamed, “Dad!” and jerked into life, starting to run towards their father.

Holly’s arm seemed to move by itself. She was only aware that it was moving after it had darted forward and grabbed her brother by his pyjama sleeve. “Don’t!” she said sharply. “There’s something bad over there.” As she spoke, she had a sense (she wasn’t conscious of it until after the words came out) that over there was not a place for an 11-year-old boy to be. And she needed a big brother to look after her. At least until she was 11 herself.

“No,” their dad shouted. “She’s right. Stay where you are!” Their father’s voice lost its agony and spoke with command.

“Dad, what happened?” Noel’s own voice went up several octaves and ended in a squeak.

In that moment there was light. Bang. After the gloom and seedy flashing of the tree lights, it was like a supernova.

“What’s going on?” Mum said from the doorway as she flipped the light switch. “Oh my God!”

They could see everything now. Several times, as the sitting-room scene was reflected in the windows made black and mirror-like by the bright overhead lamp. The tree dominated the room, with the couch and armchairs and coffee table moved aside to make way for it. A bulky, white-bearded man in a red suit with white fur trimming was lying under it like the biggest (but not best) Christmas present ever. And their Dad, in his pyjamas, rocking on his back next to him, groaning in pain and clutching a bare foot dripping with blood.

Thick, wicked-looking shards of glass lay strewn on the creamy white carpet. In places it was spattered, sometimes soaked with bright red blood. Dad hadn’t wanted the white carpet in the sitting room, but Mum had insisted. She must be regretting it now. She had covered the red wine stain with Dad’s special reclining armchair. What was she going to do about this?

“Don’t move, I’ll get something, wait – ” Holly and Noel’s mum kicked aside a large, jagged piece of glass and looked around frantically for something to staunch the bleeding. She snatched up the protective arm sleeve off the comfy chair. “Here,” she said, “apply some pressure until I can get a proper bandage.” She swiped the floor with her hand to clear away further debris before kneeling down.

“Fine!” she snapped, and pulled down his pyjama leg far enough to wind around his foot.

“I’ll be right back. You two,” the kids’ mother said, darting a speedy glance at them, “stay where you are. There’s glass everywhere.” She ran off into the back kitchen to look for medical supplies, switching on lights as she went.

“What are we going to do about Santa?” Noel asked. “I mean,” he corrected, “the fella in the suit? Should I call the guards?”

“No,” said his father, rather sharply, as his wife returned to help him up. “Wait till Mum has bandaged this up.”

“We’ll be right back. Don’t move a muscle,” ordered their mother, supporting her husband as he hobbled out of the room with her.

Holly and Noel continued to stand there after their parents disappeared into the kitchen. Less out of obedience than bewilderment. They heard their father shout “OW! Don’t touch it!” And their mother snap back, “Hold still! How else am I going to get the glass out?”

“Oh, God,” cried a voice at the door behind them. “What have you done to him?”