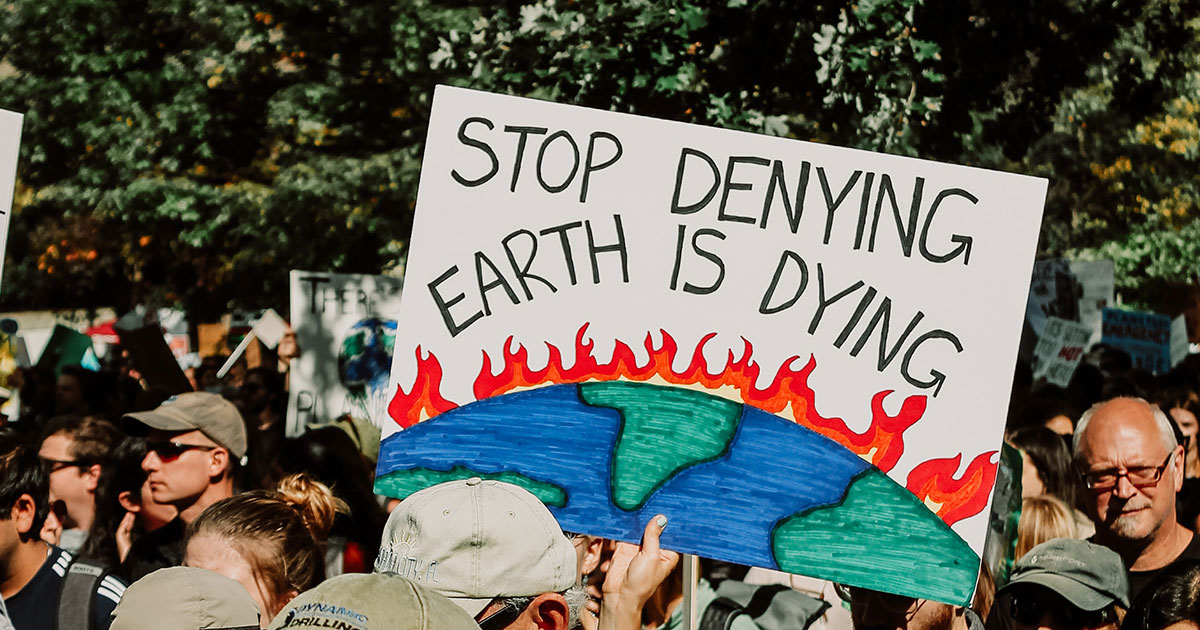 “Unless there are rapid, sustained and large-scale reductions of climate change-causing greenhouse gas emissions, including CO2, methane and others, the goal of limiting global warming to 1.5C compared to pre-industrial levels, as enshrined in the Paris Agreement, will be beyond reach.” – UN Climate Change Secretariat

In the light of the recent IPCC report[2] on the state of the planet, and the catastrophic trajectory of projected climate change, Antonio Guterres, the General Secretary of the United Nations, was unequivocal: “This is Code Red for Humanity”.

Code Red, in this instance, means basically, things are bad, emergency level bad, and getting worse. We need immediate, emergency climate measures, right now, if we are to avoid all the horrific consequences of a runaway climate disaster, shooting past the mark of 1.5°C of warming, towards a future of pain, suffering and death for all living beings on the planet.

The IPCC report was splashed across the media. Even conservative papers, like the British Times, ran headlines. It was big news – for a couple of days.  And now? Business as usual.

Of course, it’s no surprise that governments wedded to this or that version of neo-liberal orthodoxy are at best sluggish – and at worse actively recalcitrant –  on climate action. The fact that they need to be massively pressured into doing even the bare minimum is something that we have come to accept as a given.

But what has been the reaction of the rest of society? Political parties, say, or the established churches, or trade unions, or mainstream environmental organisations? Has there been a push for concerted action, a call for people to protest on a massive scale, declarations of intent, letters to government, anything?

Nope, not on any meaningful scale.

(As I write, about 2000 people from fringe climate groups are protesting – to their credit – in the centre of Berlin, but their efforts have remained largely unnoticed by the general population).

Overwhelmingly though, civil society’s reaction to the IPCC report has been a deafening silence. Yet this is not because the population at large is disinterested in the fate of the earth. A recent international survey showed extremely high levels of concern and anxiety about the increasingly obvious planetary changes that we are currently going through.

It seems to me that the current earth crisis is expressing itself as a crisis of political will, of leadership, of organisation, of mobilisation. But it’s also a crisis of hope, of morals, ethics, civic engagement, facing up to reality, call it what you will.

Not one major, mainstream organisation seems to have the guts to call for a nationwide, let alone international, demonstration to protest government inaction in the face of the suicidal do-nothing course that we are on. I’m talking here about organisations where one might be forgiven for thinking that they feel some sense of responsibility towards their members. Where the issue of whether their adherents, or their families, living or dying in the foreseeable future might elicit some response other than a shrug of the shoulders.

It seems that in the death throes of the neoliberal order, that’s simply not the world we are living in. The political parties are too enmeshed in the business of government to call for anything resembling a popular mobilisation. Other bodies, like the unions, simply point the other way – not our remit.

But whose remit is it? Whose responsibility is it, to get the ball rolling, and to state the blindingly obvious: the longer we wait to act, the more like hell on earth our world will become?

In my opinion, the answer is clear. It’s everyone’s responsibility. Yours, mine, everyone’s. The issue of human survival, and the preservation of what remains of the ecosphere, is so massively, overarchingly important that it cannot be delegated to one single group. This is an issue that we all have to pick up, wherever we are.

Of course, recent years have seen the emergence of movements that have captured the public imagination, movements like Fridays for Future or Extinction Rebellion. Extinction Rebellion in particular caught the moment back in 2018, when it successfully organised mass protests in London and other cities in the UK. The movement’s use of civil disobedience tactics and its clear messaging led to it spreading quickly around the world, and attracting tens of thousands of new members. However, since then its attractiveness has dwindled, with many members – including myself – becoming disillusioned with the unelected and unaccountable leadership, lack of internal democracy and discussion, and cult-like set-in-stone principles handed down from on high. The group’s insistence on its “Three Principles” (“Tell the Truth”, “Act Now” and “Go Beyond Politics”) mean that it has held aloof from actually formulating more detailed political demands or practical policies.

Extinction Rebellion thought they had the answer – using popular pressure in order to set up a Citizens’ Assembly as an advisory body to the government – and although for a while they had the numbers, in Germany at least they no longer represent a serious pole of attraction to young activists.

In my home town of Berlin, from a high point in 2019 when literally thousands of people were applying for membership, XR has become a much reduced force, with a reputation for combatting the left within its ranks and a sectarian and patronising attitude towards other environmental groups.

The most successful approach to mobilisation so far was kicked off back in 2019 by the example of the striking school students organised under the banner of Fridays for Future. Not only were the pupils and students showing the way by engaging in regular strike action, they also instigated a wave of coalition building, and spent a long time preparing the ground for the Global Climate Strike of 2019, which mobilised an estimated 4 million participants across the entire planet. People were actively striking, the issue of climate action was being debated by popular organisations around the world, there was the sense of a movement being built.

However, that first wave crested even before the Covid crisis hit. Actions were becoming increasingly poorly prepared and local, and a generation of young activists were burning out after a year of intense activity with no significant change of course on the part of governments, and a global crisis that continues to get worse.

Right now there seems to be a second wave in the offing. Spurred by the election of the Biden administration in the States, and the relaxation of Covid lockdown regulations in many countries, along with the continuing and increasing environmental shocks around the world, people are once again demanding real change.

So what is the course we should be taking? Whilst not denying that there’s a place for street theatre and symbolic occupations, we should be strongly orienting towards building strategic coalitions to get as many people out on the street as possible.

There are a couple of dates coming up that can provide a focus. One is the new Global Climate Strike being called by FFF for September 24th. The other, more significant date, is November 1st, which is when the COP26 discussions start in Glasgow. It’s probably no exaggeration that these talks are going to define the path that global capitalism is set to take in the coming years of climate catastrophe. We need to make sure that our voices are heard. Wherever you are, whatever your political orientation, if you are ready to believe the considered consensus of the world’s scientists as expressed in the IPCC report, you need to get your ass into gear and your body out on the street.

Discuss the issue in your workplace, your university, your school, your congregation, wherever. Put forward a motion, get your peers to take a stand. The situation is dire, and getting worse. It’s only by joining forces that we stand a chance of turning this thing around. For the sake of ourselves, and of future generations, we have to step up to make sure that the conference comes up with concrete steps towards an emergency reduction of carbon emissions – not by 2050, not by 2035 – but starting immediately.

We need immediate emergency climate action, including the active decommissioning of all fossil fuel projects, with retraining and jobs for workers in those industries. We need a halt to deforestation and a massive plan of active reforestation as part of a carbon drawn-down program. Industry needs to be re-tooled towards green technology, and there must be an end to all subsidies for fossil fuel industries, as well as fossil-fuel based aviation and transportation. We need a massive global increase in subsidies for scaled-up alternative energy technologies.  We need to green our cities and make public transport clean and free of charge.

The time for government prevarication is over. We can no longer let the logic of capitalist business interests condemn our planet to destruction. And while billionaires like Bezos, Branson and Musk fantasize about escaping into space, we know that the Earth is our only home, and that there can be no escape for the rest of us.

It’s time to put a stop to this madness.