LESSONS FROM THE PAST 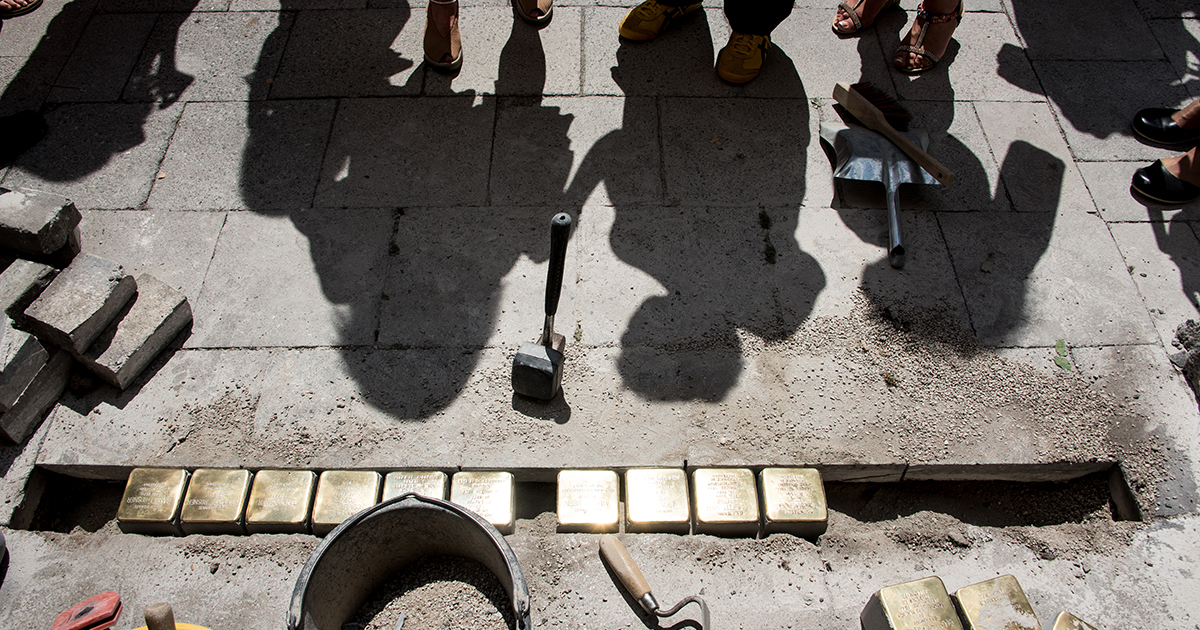 After the dark, cold winters, summer brings 17 hours of daylight and over-enthusiastic birds that sing their hearts out at 5:00 am and 10:00 pm each day.  We live in West Berlin, which is still covered in parks, water, playgrounds, and public space, as part of its legacy as a self-contained island during the Cold War.

I live on a street that was once the heart of a predominately Jewish neighborhood.  Seven thousand people on my street alone were murdered and deported to concentration camps during the Nazi era.  Each block has golden Stolpersteine embedded in the sidewalk – metal cobblestones that bear the name and fate of the building’s (usually Jewish) occupants, who died at the hands of Nazis.  Perhaps after another year of living here, these reminders will become invisible and fade into the scenery.  For now, it feels like a moral imperative to keep seeing them.

This summer, my days are even longer.  My newborn daughter sleeps until 2:00 or 3:00 am, when she awakes to nurse voraciously.  With an overflowing belly, she must remain upright for an hour to digest all that milk comfortably.  While I hold my baby and take in her newborn smell, with my other hand I hold my phone and catch up on the news from the U.S.  It is jarring, and keeps me from falling back asleep.

In November last year, I wrote about my awakening to the truth of America’s bigotry.  Each day since has been worse, with Trump’s presidency casting a dark shadow on my family’s otherwise light, happy days.  Neo-Nazis, white supremacists, members of the Ku Klux Klan, and the self-defined “alt-right” have held a rally in Charlottesville, Virginia.  I am outraged and more than a little annoyed by the people who expressed surprise.  Trump’s hateful rhetoric has stayed consistent since his candidacy, and before, with his bigoted supporters becoming increasingly vocal.  Although I treasure my own childhood in Appalachia, I am reminded again why we are raising our (Jewish) children in Berlin instead of the United States.

One of the best aspects of growing up in rural Ohio was the long conversations in the car with my father.  Our farm was about thirty minutes away from the nearest small town, giving us ample time together.  Probably more often than not, we simply sang along to the Beatles and chatted about the day’s nothingness, but my memory holds only the deeper conversations.

Once, when I was about 6 or 7 years old, I remember him trying to explain the word “prejudice” to me, and my inability to understand.  Not even a week later, again in the car, I reported to my father that a little boy had said to a friend, “Anyway, my family doesn’t even like your family.  Your dad’s Jewish.”

“That’s prejudice,” my own Jewish father explained to me.  I don’t remember the rest of the conversation, but will never forget this epiphany, or the incident that spurred it.  The confusion and odd sensation in my stomach, and the creeping tingle all over my body.  And my silence.  I remember my child’s mind trying to decide whether to ask, “So what? My dad’s Jewish,” or to keep that information, which had now suddenly become a secret, quiet.

I chose silence.  I chose it again, when my middle school friend told me she wouldn’t come to my pool party, a separate event to celebrate my Bat Mitzvah, because her parents told her “that’s a Jew thing.”  She, and some other popular kids, attended the Catholic church across the street from the local Hillel, where I went to Hebrew school on Sunday mornings.  Both let out at noon, and I would position myself behind posts or find reasons to go back inside, so no one would see me coming out.

Earlier this summer, I found myself at the Jewish Museum in a dark, cement room, with only a slivered skylight.  The room is meant to elicit strong emotions and associations, and accordingly, my two-year-old was scared.  As I picked him up and began singing a silly song quietly, the same old thought ran through my mind that always does at Jewish memorials.  They would have killed me.  This time, however, the next thought lumped in my throat, tears stinging my eyes.  They would have killed our children.  I sang louder and relished his giggles, ignoring side-eye glances from other visitors.

In the quiet, early mornings with my baby, I think more about childhood, history, and current events.  I am grateful to be in Germany, which—unlike the U.S.—seems to address the truth of its past head on, successfully.  I vow to make time for difficult conversations with my children, like my father, my parents, did for me.  I will encourage my children to keep seeing the Stolpersteine, but to believe in the good in people.  To recognize society’s systemic failings that lead to events like Charlottesville and Trump’s election.  And to speak out against prejudice, every time.