KANYE, THE PEOPLE, AND WHO WE THINK WE ARE 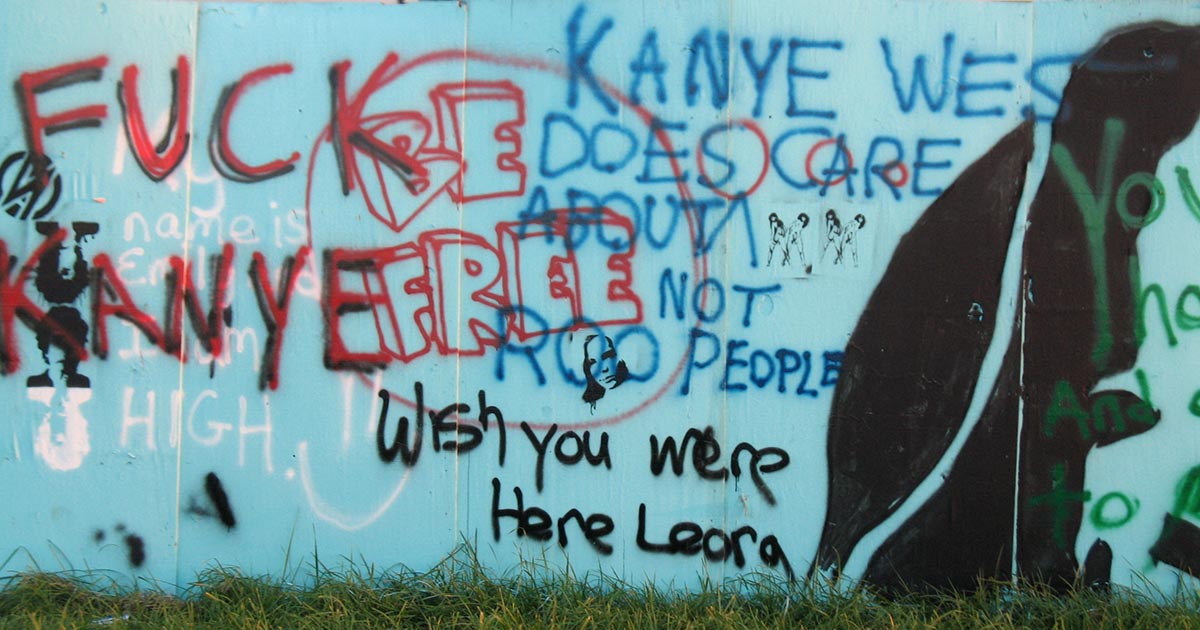 The late great coach Dennis Green, unfortunately, was immortalized in sports history for his meltdown on national TV after a loss to the Chicago Bears. During this famous postgame interview, Coach Green repeated the now notorious phrase, “They are who we thought they were!” Looking back I find it more interesting the more I think about it. There are so many ways we people use this phrase or this idea. Coach Green used it to say that the Chicago Bears were a good team, and that nobody should be surprised they lost to a good team. “They are who we thought they were” could also be used to describe stereotypes and prejudices, personalities and romantic history, someone’s physical or mental strengths, etc.  “They are who we thought they were.” This is interesting to me because it feels like this idea could only be based on our biased knowledge and understanding of precedent. Do we ever truly know who people are, beyond our own interpretation? An interpretation that is formed from associations with other things we know.  “They are who we thought they were” gets even more interesting when we think about the people we look up to. The people we worship because of their talent or their art and whose characters we make assumptions about solely based on that. The people we don’t actually know but believe we know and put on a pedestal. People like Kanye West.

At first when I saw the controversy Kanye West was stirring up on Twitter I wasn’t very interested in what he had to say. I thought it was the usual Kanye West rant before a new album drops. It wasn’t until his infamous TMZ interview went viral that I took notice. I took notice not because of what Kanye said (“When you hear about slavery for 400 years…that sounds like a choice,”) but because of how people reacted. What he said was horrifically wrong. However, the chants for the return of an “Old Kanye” and claims of mental illness were strange to me. It seems strange to me that so many people believe that Kanye West has changed. Especially in a time when a plethora of Hollywood A-list actors, producers, and mainstream pop artists have been found to have sexual harassment and rape accusations in their past. Is Kanye West any different than any of these other Hollywood titans we thought would never be involved in what they were caught being involved in? Apparently not. Especially when it comes to the hip hop and African American communities. But why? Sure, the comedy world was shocked when Louis C.K. was found to have appalling sexual misconduct in his closet. But, from a used-to-be-fan’s perspective, was he not the same comedian whose work on stand up and television thrived off the point of view of a misogynistic loner? Was he not a comedian who was known for pushing the boundaries of people’s comfort with dark, twisted or over the top sexual humor?

When it comes to Kanye West’s outlandish interviews, Twitter tirades and strong support of Trump, is this not the same hedonistic, self-obsessed narcissist who time and time again pushed buttons to offend people? Is this not the same person who viewed himself as not only the voice of the people but also as someone speaking against the grain of popular thought? Is this not the same person who bragged about his art so much that he was once quoted as saying that one of his biggest regrets is not being able to see himself, as the audience, perform live? Was the music and image of Kanye so distracting that we could not see these flaws? Were they so distracting that we couldn’t see his rants as being in character? Who did we think Kanye really was?

Sure, it is easy to dissect what he said in his TMZ interview soundbite and prove Kanye was wrong. It’s simple really. Slavery was not a choice, people who were bred and kept in captivity like animals had not only no sense of freedom but no idea of their own humanity. Though a vocal minority on social media defended Kanye, saying he was talking about the mental slavery we put ourselves in as a community, it’s still pretty obvious what he said was wrong and he knew it was going to be a controversial perspective. It’s easy to talk about why Kanye is wrong, but why do we even care? Maybe he is who we thought he was.

There is this weird thing I’ve noticed we do as people. As people we tend to not only gravitate towards things we like but let these things define us or at least how we interact with others. Our favorite music, movies, TV shows and books, our favorite sports, our favorite foods, our favorite ways to escape mundane life, all seem to shape who we are. It helps us make friends and build an understanding of ourselves. From my experience, this comes with its own downfall. Especially with social media and how much easier it is to magnify our bubble of things that define us; preaching to the choir, picking a side. It could be why people care what Kanye say as oppose to any other troll. “Because if Kanye likes Trump, that means I, the fan of his music, also like Trump.”

Of course that isn’t the case. If we don’t agree with or are offended by Kanye West, we could just not listen to his music anymore. Not support any of his produced music or the people he is affiliated with. In no way am I saying not to separate the art from the artist. There are plenty of music artists like Chris Brown, who I don’t support due to their history. This can be hard, especially if it is someone we grew up with and looked up to. For many people Bill Cosby was not only a cornerstone of decades of entertainment but also of the African American community. Many people, myself included, grew up with Kanye West and dreamed of being someone who could make music like him. But maybe these celebrities disappointing us is a good thing. Maybe we should stop relying on these bubbles so much, putting so much emphasis on who we are based on our fandom of people we don’t really know. Instead, we could be ourselves and not who people thought we were.