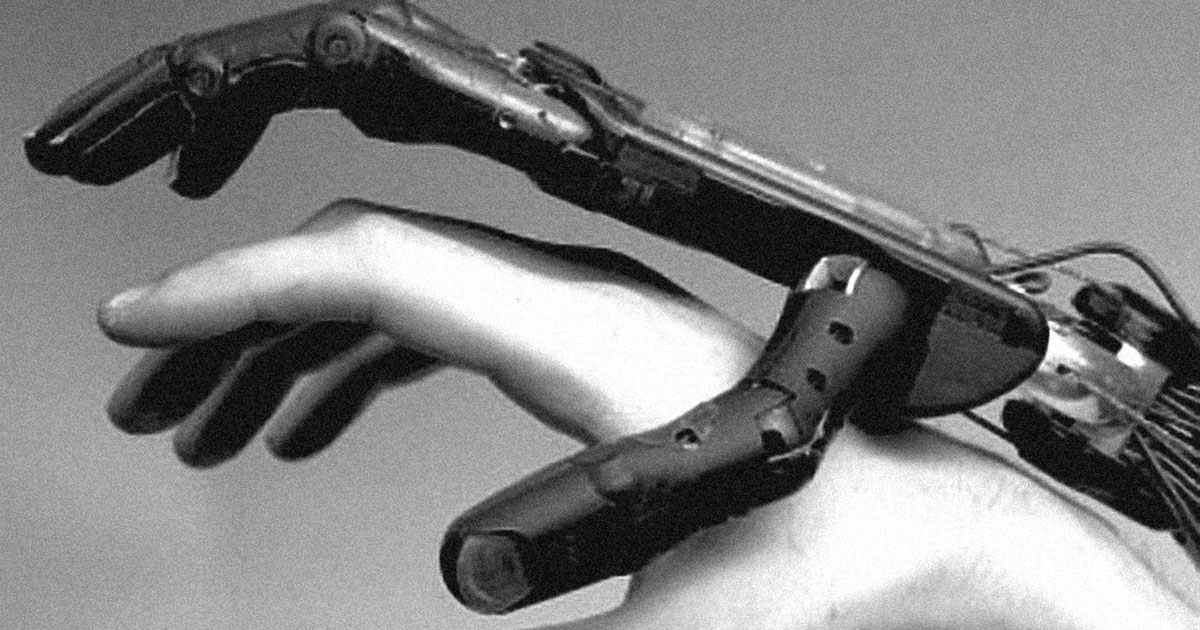 The engineer connected the final wire and stepped back with a tired smile. Alice sat in front of him, uncertain and tense. The tangle of cables wound around her thigh and lower back, up to her shoulder, and down her arm to the plastic hand now extending from the stump of her elbow.

“Okay, Alice,” He said, “Just think about opening the hand.”

Her thigh tensed against the seat, and the electrodes shifted against the skin beneath her skirt. The index finger and thumb of the hand vibrated, opened an inch, and froze as her eyes went wide, a smile forming on her lips.

“It moved!” She squealed.

“Good job,” He set an unopened can of soda on the desk, “Try to wrap the hand around it.”

She used her shoulder to shift the elbow of the prosthetic onto the table; the tips of her plastic fingers rested against the edge of the can. It was cold, but this hand didn’t have a sense of touch; she only knew it from the beads of condensation rolling down the side of the can to pool on the table.

The left side of her tensed: thigh, side, shoulder, and suddenly, all the fingers snapped open. They buzzed as the joints locked up, hyperextended, and the engineer reached forward to press a button on the back of the arm. The whirring stopped, but the smell of metal lingered in the air, like evaporating pennies.

“It doesn’t need much,” He explained, “Just a small amount of electricity. If you do too much, it will burn the gears out.”

“What does the button do?” She asked.

“It cuts off the electrical signal going to the hand and fingers. If the hand ever locks up or won’t stop moving, press it and give it a second for the motors to stop. Keep going.”

Her fingers hung in front of the can unmoving, all extended out like a claw ready to snatch the can off the table. Her elbow shifted forward until the fingers surrounded the can, and she relaxed. Both watched the fingers jilt and jolt as they slowly curled inwards to grip the can. It wasn’t a fluid motion; muscles tensed and spasmed as she tried to find the sweet spot, but eventually, the fingers closed around the can. Water beaded on the tips.

“Mostly waterproof,” He said, “Don’t fully submerge it, if you can avoid it.”

“Submerge it?” She asked.

“No swimming or baths or showers.”

She nodded, blonde curls bounced as her eyes focused on the water dappled hand.

“Will it crush the can?”

He chuckled, “It’s not that strong. Sorry, you only look like Iron Man.”

She giggled and tried to lift her arm at the elbow. Alice’s stump began just beyond the joint; it made easier to attach the prosthetic. Most of the electrodes were bundled up around her bicep and shoulder.

As the arm came up, drops of water fell into the puddle on the table, and the can slipped out of her new fingers. It landed with a clink and nearly rolled away, but the engineer leaned forward to snatch it up. There was a dent in the side. Alice’s lips puckered. He set it down in front of her, and she tried again.

Each time she tried to lift the can, the slick metal slid out of her grip. The engineer frowned; she wasn’t tightening the fingers enough to grasp it, but he didn’t want to blame Alice. Already, the girl’s eyes watered, cheeks red with frustration. She puckered her lips and blew a tangle of curls out of her eyes and tried again.

When the can fell the third time, it struck the edge of the table. A hiss of foam erupted from the gash in the side, and Alice screamed. The engineer caught the leaking can and rushed it over to the sink. When he came back, a streak of stains ran down his shirt. Over his shoulder, Alice saw the trickle of soda rising into the air and falling into the sink. The hiss echoed the whirr of the prosthetic’s motors as her body went tense, holding back tears.

The engineer returned and put his hand over the plastic hand, “Hey, it’s okay, kid. You’re getting used to it.”

She flipped the hand over. The palm faced the ceiling, and the green light extended across the table like a shadow. His hand rested over hers, the fingers sticky from drops of soda. She sniffled and stared at the hand, as if it was its fault. The engineer smiled at her again.

Another sniff followed by the low whirr of the fingers curling inwards. They didn’t jolt this time, but they moved slowly. The engineer froze in place, his own muscles tense. Sweat dripped down his back, and his palm felt sweaty. He stuck his hand in his pocket.

The plastic fingers curled, and his hand interlaced with hers. The whir of motors stopped, and the engineer pulled his hand from his pocket to set it atop their other hands. 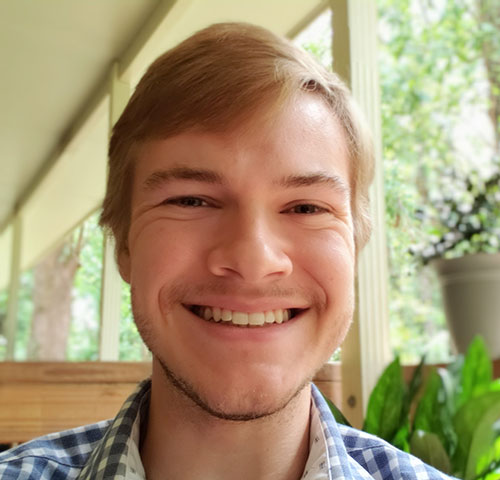 Charles Venable is a storyteller from the Southeastern United States with a love of nature and a passion for writing. He believes stories and poems are about getting there, not being there, and he enjoys those tales that take their time getting to the point.