Ending the Horror Movie of the Trump Presidency 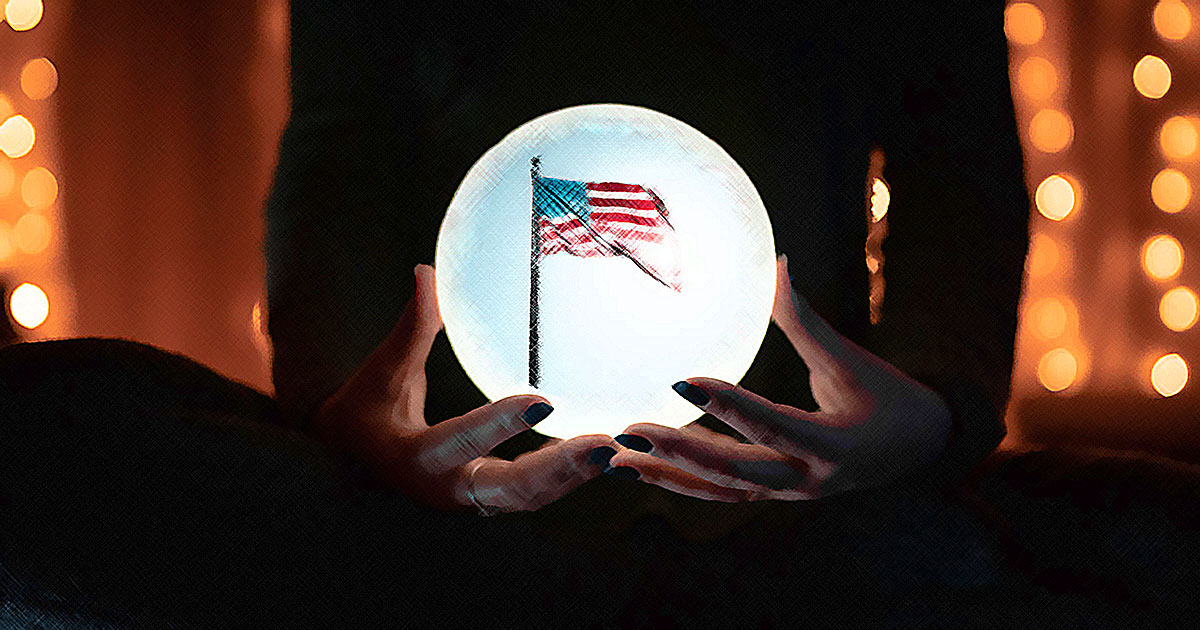 In my first column for the inaugural edition of The Wild Word, I opined that Donald Trump’s bid to win the upcoming 2016 election was so unlikely, it was almost laughable. Almost.

Skeptical as I was, I raised a chilling specter in that column: the prospect of Trump’s hand shooting up from the grave of his shambolic presidential campaign, a stubby-fingered version of the one that pops out at the end of the movie Carrie. Unfortunately, the scenario I dreamed up then, mostly to give readers and myself the mild thrill of a scary-but-easily-dismissed fright, actually came to pass.

Beginning with the “American carnage” speech Trump gave at his inauguration, the horrors rushed at us with merciless frequency: Bans on Muslims; children in cages; the defilement of land, air, and water; repeated assaults on democracy, truth, even reality itself; and a murderous mishandling of the coronavirus pandemic. These past four years, Americans have been trapped in a haunted house—one where the doors are barred and the windows have been nailed shut.

Now maybe, just maybe (I’ll never be as cocky as I was before Trump’s Electoral College win) Trump’s presidency is coming to a close. The task that lies ahead is ensuring that the horror movie that’s winding down to its closing credits (and remember, that usually means one last big scare) won’t have a sequel.

To do that, we must react like superstitious villagers in a black-and-white vampire movie. We must not only plunge a stake into the heart of Trumpism, we must cut off its head and bury that ugly head and misshapen body separately near a crossroads. Then sprinkle holy water on the site before covering it over in a ton of concrete. And then sprinkle holy water on the concrete.

What we emphatically must not do is to look away from the damage Trump has done. Millions of us yearn to never think of him ever again, wishing that the knowledge that Trump exists could be wiped from our consciousness, like in the film Eternal Sunshine of the Spotless Mind.

Tempting as it is to try to forget, the months ahead should be a time to finally hold Trump and his minions accountable. They should be investigated by Congress and the courts for their innumerable crimes, or at least the most egregious ones. And the staggering tally of what Trump has cost the nation must be calculated: the lost lives, the trashing of the environment, the damage to our alliances, and the tarnishing of the nation’s image. We also need at least a ballpark estimate of how much money from taxpayers, lobbyists, and foreign governments wound up in the Trump family’s pockets.

The incalculable harm that Trump has done will continue to reverberate, and foremost among those harms is his aggrieved, fact-denying support base. Trumpers need to see clearly all the damage their “champion” has wrought. Not just on democracy or America’s standing globally, but on their own lives, the economy, and civil discourse. One of the lessons we should learn from the nightmare of Trumpism is the profound danger of dehumanizing others, so I hesitate to use this analogy, but here goes: Just as you might hold a dog’s nose in the mess it made to encourage it not to shit in the house, those who still stubbornly support Trump should be forced to see and smell the mess Trump made in the White House.

Sure, I’m being harsh, but in part that’s a reaction to the way that the media and some Democrats’ attempts to understand Trump supporters often cross over into coddling. “Somehow, compromise has come to mean not doing anything to upset anyone who is completely fine with ignoring the most urgent problems of our day,” observed author and commentator Roxane Gay. “Progress angers people, but change is not the problem. The rage and resentment are.”

President-elect Joe Biden pitches himself as a healer and a unifier, and the country surely could do with a good dose of that. But the incoming administration can’t move on from the Trump kleptocracy without unearthing and documenting the level of harm Trump and his Republican enablers have done to the country. Not only should there be thorough investigations, but something along the lines of South Africa’s Truth and Reconciliation Commission might be called for. We need to consider not only the grievances of those who find societal change frightening, but those for whom continued change is absolutely necessary if they are to live, love, and thrive in the future.

Limping to the Finish Line

First, we have to get through the three weeks until Biden takes office on January 20. In his increasingly desperate attempts to overturn the election or at least undermine Biden’s presidency, Trump isn’t playing 3-D chess, he’s playing tiddlywinks. He knocks over the board every time the game doesn’t go his way, which is deliciously often. In short, the vast Trump crime enterprise is grinding to the shameful and ignominious halt it so richly deserves.

If there wasn’t so much danger inherent in Trump’s relentless attempts to dismantle American democracy, we could revel in the embarrassing absurdity of the Four Seasons Total Landscaping press-conference debacle, Rudy Giuliani’s flowing rivulets of hair dye, and the warbling intensity of yet another Trump attorney, Sidney Powell (who seems to be the lovechild of Joseph McCarthy and Mrs. Doubtfire). Actually, I do revel in it, and I encourage you to do the same. But we can’t forget the danger.

Just as it was back in 2015, my crystal ball is cloudy as I try to foresee what lies ahead for America, both in the near and the long term. I don’t think the bid to toss out the Electoral College results when Congress is due to certify Biden’s victory on January 6 will be successful. A greater worry is that there will be outbreaks of violence before, during, and after Biden’s inauguration. I’m closing in on 60, and this is the first time in my life I have feared widespread violence in my home country. And I’m not alone. Paul Light, a political scientist at New York University said of Trump and his supporters’ stubborn refusal to acknowledge the election results, “America could fracture.”

True as those words are, my initial reaction was indignation. Fracture over what? To protect the grafting and preening of a family of shameless, talentless losers? Why would Americans rise up for a cause as unworthy as that? Then I remembered that a significant portion of the U.S. population rose up to preserve slavery.

Just as the end of the Civil War did not magically reunite the country, neither will the end of Trump’s presidency. America is not now, nor has it ever been, the shining city on the hill that Ronald Regan evoked in his speeches. At the moment, we’re awash in the filth of the Trump administration. The time has come to start the long and arduous process of hosing away the muck. And once that happens, perhaps at least a few of his supporters will finally see that they were duped by a con man.

Trump’s 2016 election proved that a wide swathe of what was once the world’s most celebrated democracy is anti-democratic. But the fact that Biden beat Trump four years later by more than 7 million votes is cause for celebration and dare I utter it, hope. It says something good about the American people—at least lots of us—and about democracy itself.

Midway through Trump’s reign of misrule, I came upon a circa-2014 pile of New Yorker magazines. I jumped in eagerly, longing for respite from the near-constant outrage, anxiety, and incredulity Trump’s presidency stirred in me pretty much every hour of every day. But I stopped soon after I started. The pre-Trump world, a world I’d so blithely inhabited just a few years before, seemed like a science-fiction utopia. And a doomed one, since I was painfully aware that it would soon turn into the fucked-up world I was trying to live through.

Like many others, I will never be as blithe as I was before Trump. (And frankly, I was never all that blithe, who am I trying to kid?) But if we manage to not only get rid of Trump but to expose his crimes, the damage he’s wrought nationally and internationally, and his contempt for his own supporters, better days may lie in America’s future, not just our past.