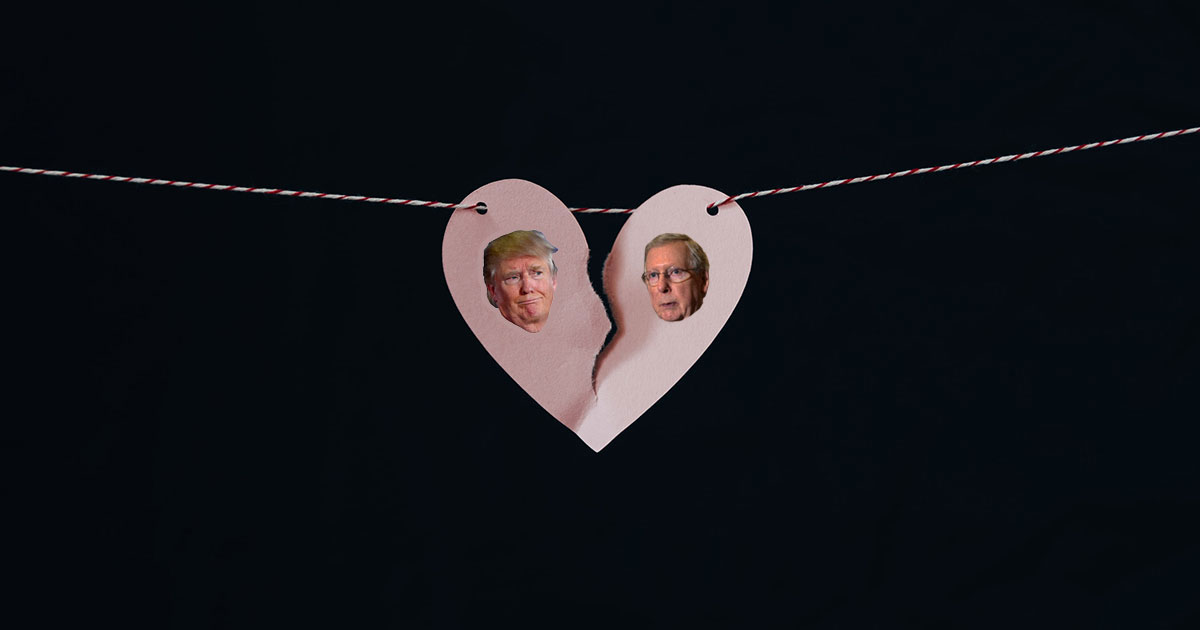 This morning I woke to the news that Donald Trump had called Mitch McConnell “a dour, sullen and unsmiling political hack.” It was only days after McConnell accused Trump of a “disgraceful dereliction of duty,” and said Trump was “practically and morally responsible for” the attack on the capitol.

As I had my morning coffee I couldn’t help but wonder what looking glass we had gone through. The two most prominent politicians in the Grand Old Party were publicly and shamelessly swinging their purses at each other. They used to seem so close. Trump made Mrs. McConnell (better known as Ms. Chao) his transportation secretary.  McConnell had claimed, during the first impeachment, the Senate’s deliberation was in “total coordination with the White House.” They were such a cute couple.

But, that’s the real problem with power couples. They generate so much energy, so much heat, one small abnormality can cause a catastrophe.

My wife and I have been married for years, and we have fought about almost everything a couple can fight about. Sometimes we argued about what we were going to fight about next. These days about the best we can manage is a dustup about whether we should have soft shell or crispy tacos. Just as a rule of thumb for you newlyweds, soft shell is always the right answer, but just to be difficult my wife will, on occasion, want the inferior hard corn shells. Being the loving spouse I will cede to her wishes and she will decide, since we already have soft, flour shells, we should just use those.

Couples like Trump/McConnell can’t reach that kind of compromise. No, the electricity runs too high, the temperature is too intense. You could almost see the crackle, sizzle and pop when they were on television together. There is too much at stake for either of them to back down. Nobody is going to give a fat rat’s butt what kind of taco shells are in the pantry.

Being in that kind of relationship is similar to getting a rock in your shoe while out hiking through the glorious bounty of nature. At first it’s a minor irritant and you know you should do something about it. But, it doesn’t seem safe to set on that fallen tree trunk and remove it. For one thing you aren’t sure what animal has been climbing over that tree trunk, or sleeping on it, or using it as a place to eat God knows what. You can’t even tell what killed the tree and made it collapse so conveniently by the side of the trail. And, if recent events have proven anything it’s the fact that diseases can cross species lines with terrifying speed, disturbing ease, and horrible results. Lord knows you didn’t bring enough Clorox wipes to disinfect that kind of toxic dump.

So, you walk back to the car. By the time you get there the minor irritant has become a crippling, torturous pain. At one point you tell your wife, “Just leave me, I can’t make it. Remember me fondly.” Until she says she will and you remember where you are and realize the only thing worse than dying in a heroic attempt to escape is staying. By the time you get to the car you are sure a small to medium sized rodent has taken up residence in your synthetic, antibacterial crew socks and has clawed a warren big enough to raise a family into your heel.

This is the kind of intensity power couples deal with all the time. It starts small, you lose an election and he stops taking your calls.  You try to overthrow the government in a thwarted, childish coup attempt and all the sudden you’re a pariah. The orbit in which they circle each other becomes erratic, looping, stretching, and twisting. Eventually it fractures into fabulous shards of rancor and accusations, until everybody thinks, “Wow what a couple of jerks.”

Looking at it from a distance all you see is the explosion as they become another epitaph on social media.  Kim and Kanye, Demi and Bruce, Miley Cyrus and Thor, Brangelina, slaves to power and unconcerned with the monotony of being a couple. Once the brilliance wears off and you are left facing the daily drudgery of existence it takes a special kind of strength.

Trump/McConnell became ensnared in what I like to call the Couples Bathroom Disaster Test. In every couple at least one person is going to have a very strong opinion about whether the toilet paper should be loaded over the top or behind the roll. Unless the other person is willing to live with that the relationship is doomed. Sometimes, just to make things work, you have to learn to eat your pasta al-dente, no matter how your mother made it. Once in a while you just have to learn to sleep without any blankets no matter how frigid it is in the bedroom just so your significant other can be warm.

When I think about it, I’m kind of an expert on making relationships work. I should open a little business; Tim’s Marriage Advice and Bakery (the best donuts in the tri-county area). If you know anybody who needs help let me know. If you know Mitch or Donald give them my number.