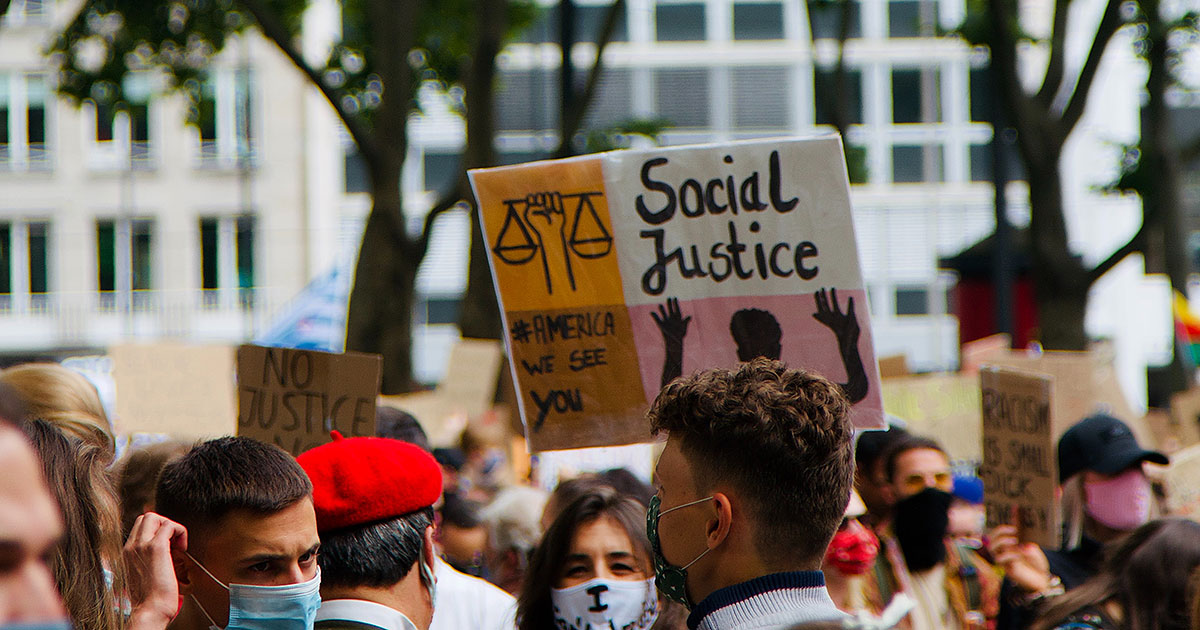 Ok, I admit it. I’m a sucker for optimism.

There’s only so much bad news a person can take, so these days, if there’s even the slimmest ray of hope, I’m like – hell yeah, party time people!

And of course it’s no exaggeration to say that the events of the past few weeks in the USA have kept progressives the world over glued to their screens and holding their breath.

So we scraped through. Avoided a coup. Averted the kidnapping and killing of members of Congress. Actually managed to evict Trump from the presidency. None of which was a foregone conclusion.

But I have to say that I found the sight of a near-octogenarian neoliberal getting sworn in behind miles of fencing and barbed wire in the most visibly militarized ceremony in living memory less than inspiring.

In fact, I found it more inspiring to find out that AOC had skipped the ceremony to give a speech down on at the Hunts Point strikers’ picket line in the Bronx. Inspiring because, for once, here was a group of workers who had struck for better pay, met with the solidarity of their fellow workers who refused to cross their picket lines, and actually went on to win the day.

And speaking of progressives, let me tell you something a former US Vice-President once said: “Big business must not have such control of Congress and the executive branch of government as to make it easy for them to write the rules… To work together without slipping into an American fascism will be the central problem of postwar democracy”.

The quote is not from Biden, but from Henry A. Wallace, in 1944, when the USA was actually at war with fascism. And now, in 2021, we can certainly say that big business has an iron grip on Congress, and all the other institutions of US democracy at both state and federal level, and that the threat of American fascism is larger than ever before.

That’s partly to do with the ideological war going on within big business itself. As in Weimar Germany in the 1920s, certain sectors of the ruling class decided that democracy was an impediment to their business model, and the fascists were people they could support.

In 1923 by the way, Hitler launched a ham-fisted attempt at insurrection – the Beer Hall Putsch – which resulted in his trial and imprisonment. But by 1932 the Nazis were in power.

Now that the Trumpists have had their own Beer Hall Putsch, we can be sure that they will be elaborating on that legend all the way up to their next attempt.

Of course, at the moment, everyone on the left is relieved that Biden has become president, even if he was never the progressives’ candidate of choice. And everyone is glad to see the back of Trump, and looking forward to the prospect of him never being allowed to stand for office again. But before we get our hopes too high about Biden – did I tell you I’m a sucker for optimism? –  I think it’s worth looking back to the last administration he served in, under Obama. Hopes were high then too, way higher than now, in fact. Yet the Obama government was always long on optimism, but short on delivery. Its most memorable achievement, apart from the very fact of putting a black man in the presidency, was the stunted and partial healthcare reform known as Obamacare. Apart from that, very little of note happened. Wars were waged, and Obama spent $700 billion propping up the private banking system in the crash of 2008 (rather than nationalising it). In fact, you could say that the continual appeasement of big business interests and the adoption of a neoliberal agenda was what helped push millions of US workers into the arms of the “drain the swamp” camp in the first place.

The last time the fascist camp was this big, and this well-funded, in a developed country, we were less than a decade away from a catastrophic world war, genocide, and devastation on an unimaginable scale.

And it has to be said that the Biden inauguration presented a stark image of American democracy. A political elite, ensconced behind barbed wire, protected by the military. Literally terrorized by the prospect – and recent experience –  of fascist insurrection.

The Democrats could have made the inauguration the biggest antifascist mobilisation ever seen in the history of the US. After the events of January 6th, there could easily have been a million people on the streets, Covid or no Covid. Instead we had the millionaire leaders of the Democrats (Biden $9 million, Harris $6 million, Pelosi $120 million) hiding behind barbed wire and the military. The militarisation of the ceremony simultaneously represented a depoliticisation of the fascist threat, and a demobilisation of the progressive, pro-democratic, antifascist majority.

So here we are at a new beginning. New beginning, same as the old beginning. It remains to be seen whether the Biden administration will live up to the challenge. But don’t hold your breath.

And I say don’t hold your breath, because American democracy is itself at a crossroads. There can be no return to the pre-Trump years. Covid-19, half a million dead, the climate crisis, the economic crisis, the crisis of racialized policing and the upsurge in white supremacism and fascism means that the conditions of the Bush and Obama years are just no longer there. That’s coupled with the fact that the Republican Party has morphed into a majority authoritarian and openly anti-democratic organisation. Fascism as a mass phenomenon, and the threat of armed street gangs and domestic terrorism, remain a very real threat.

If Biden follows Obama’s lead, by playing it safe, and not antagonizing business interests in any way, then the result will be the demoralisation of the Democratic vote, and the resurgence of Trumpism, or worse.

In the words of Cornel West:

“So, it is a new day. I’m so glad we stopped the neofascist threat…But I’m just now suspicious of the capitulation to the neoliberal greed and lies and hatred, now that we’ve pushed back the neofascist forms of greed and lies and hatred. And so, the issue of poor people, the issue of working people, that’s going to be the crucial thing for me. And when you look at Biden, you know, you say, “OK, the old Biden is tied to three crimes against humanity”: the invasion and occupation of Iraq, mass incarceration, especially for young Black and Brown brothers and sisters, and then you’ve got the Wall Street greed unleashed”.

And if Biden follows his instincts, and goes with law and order and increased internal repression, then that will hit progressive protest, and the BLM movement in particular, probably harder than the white nationalists. That at least is the fear expressed by the Leadership Conference on Civil and Human Rights in a recent letter to Congress.

Which brings me back to the Hunts Point strikers. Because for those of us who believe that the answer to the current crisis facing not just the US, but all of humanity, is not just tinkering with the system, but enacting fundamental system change and an equitable distribution of the planet’s resources, then every increase in the mobilizing ability and degree of organisation of the working class and the oppressed is a step towards a greater goal.

“It is the solidarity of our actions that is going to get us through… There are workers in every part of the United States who deserve more than a dollar, who deserve more than a raise. They deserve health care, they deserve justice… So I want you all to know, that when you are standing on this line, you’re not just asking for a dollar. You are asking for transformational change, for your lives, and for the lives of every food worker across this country… Because there’s a lot of things upside down right now in this economy”.

While US billionaires earn $1.1 trillion in pandemic profits, people are losing their jobs, going hungry, catching Covid and going untreated for lack of medical coverage. While the 1% live in unimaginable wealth, in the companies they run others are without rights, respect or a living wage. So if we want to defend democracy, we can start by demanding democracy – in the workplace, in healthcare access and access to education and in basic human rights.

Now that really would be a new beginning.