ZEN AND THE ART OF BARBECUE 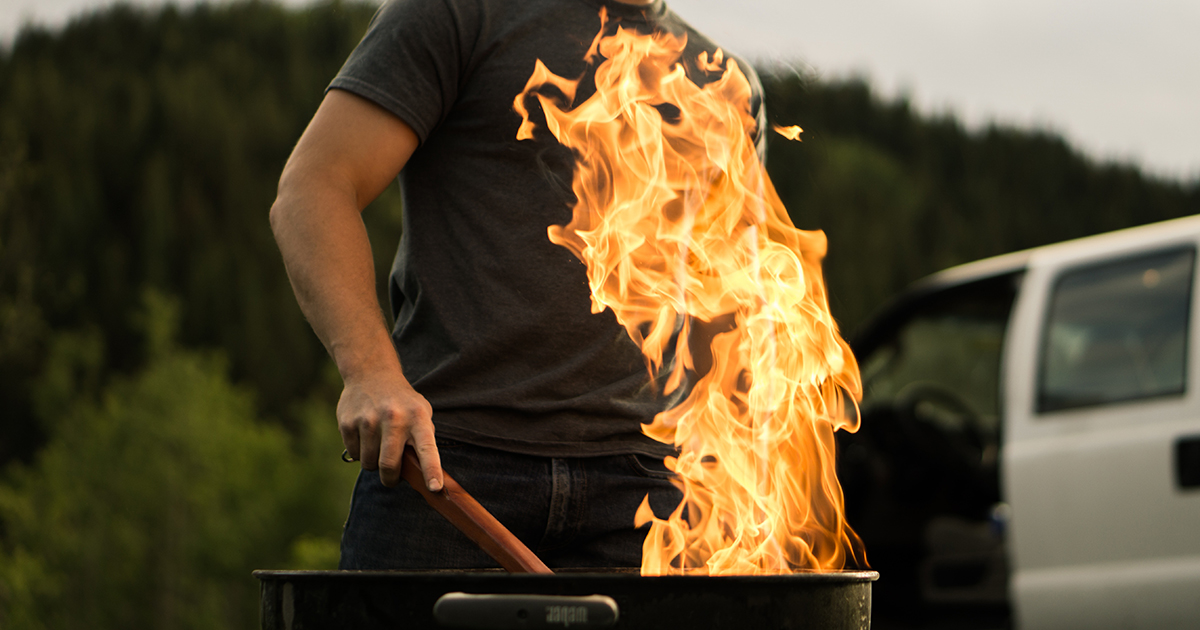 When I was younger and life got too heavy I would drop out and just do my best to disappear. In those days it was a lot easier. A few months, a little reassembly, and I was off to face the world again. There’s a song that says “That’s the trouble with reality, it’s taken far too seriously”.* That’s never been a problem for me.

One of those times, I moved into this crappy little apartment, right across the street from a crappy little house rented by a biker and his wife. This was back when bikers still viewed themselves as unpredictable, potentially dangerous nomads. In fact, I think the name and patch sewn on to his leather vest said “The Mongols.” It was before they traded in their anarchism for a seat at the table of the Republican party, before they went mainstream. In those days motorcycles were rare and Harley Davidsons were outlaw hothouse flowers. He loved to cook on his charcoal grill. He did it all the time.

Somehow I found comfort in his dedication, his steely resolve, Zen and the art of barbecue. He stood with the patience of Job behind a wall of smoke, contemplating chunks of sizzling meat. He was a rock, an island of calm in a world of turmoil. The only constant I could find. He was out there almost every day.

When I first moved in he had a flimsy looking red grill with three silver legs, two of which had wheels on the bottom so it could be rolled around like a warehouse cart. One day, as I watched through the window, he poured in charcoal and the bottom fell out. It was probably rusty from years of use. He kicked the grill, caving in the sides, and charcoal flew everywhere. He threw his beer can in the street, it slid into the gutter spilling beer all the way. He got his wife, and they drove off in their car, a red, rusted little Datsun that looked remarkably similar to his grill, lying crumpled on the grass by the sidewalk.

A short time later they were back, with a huge box tied to the top of the car. It contained a brand-new grill. It probably cost as much as the car.

He saw me looking out the window and motioned me to come over. He needed help getting it off the car and out of the box. It was a nice grill, with a heated side table and multi-level racks. He gave me a beer and showed me the stainless-steel grill tools he’d bought—tongs, a fork and an impressive spatula with a wicked serrated edge worthy of a Mongol. You could almost see Genghis Khan flipping burgers.

I didn’t know many people and he was always out grilling so we talked once in a while. He had been in Vietnam, “11 Bravo, combat infantry,” but he wasn’t particularly proud of his service. When he did talk about it, depending on how many beers he’d had, he either complained about all those strangers trying to kill him, or how he had to spend all that time tromping and sweating through the jungle trying to find people he didn’t know so he could kill them. I never asked for any more, and he never offered.

He had a mean-looking scar running from behind his ear down to his collar. You could only really see it when his hair was tied in a ponytail. The only concession he was willing to make while grilling in the heat and humidity of a late summer evening. Boots, jeans, a black t-shirt and his leather vest were not negotiable. He never told me where it came from, and I never asked, we weren’t that good of friends. But I imagined it running down his back, across the bottom of his foot, up one of his legs, and ending just below his collar. It was a scar that had a story, a long story.

One day, in the dead of winter, he was out grilling, and the blowing snow, howling wind and arctic temperatures were more than even he could handle. He had his wife move her car out of the garage into the street, and pulled his grill inside. He left the garage door open enough that he wouldn’t be overcome by the toxic fumes. Smoke was billowing out from the bottom and the sides. I laughed and went back to the basketball game on television.

Sirens, flashing lights, and an insane amount of noise pulled me back to the window. Several fire trucks were parked in the street, between my apartment and his house. He swung the door open. Standing in his driveway were several firemen, dressed in yellow jackets and helmets, holding axes, hauling the ends of hoses, serious men doing a serious job. He stood, his eyes wide, behind waves of smoke, pouring out of the recently open door, holding a beer in one hand, silver tongs in the other, a cigarette hanging out of the corner of his mouth. A standoff in the heartland, Norman Rockwell never saw America this way. One of the firemen said something to him. They stowed their gear, got in their trucks, shut off the lights and sirens, and drove off. I will always remember the scene. It still brings a smile to my face.

A few months later my unemployment benefits ran out, spring was coming and the atrophy was unbearable. I was off, in search of something. I never said goodbye to my friend the biker, grill chef, beer drinker, Buddha with a barbecue brush. I never told him how much his dedication meant to me, how his kindness had helped. I guess we weren’t that good of friends. I don’t know if I ever learned his name, and I am sure he never knew mine. Friendship is funny that way.

*Celebrate, by An Emotional Fish

Our HEAD ABOVE WATER columnist Tim Clark has chosen his top five songs about obsession below.

‘Celebrate’ by An Emotional Fish. Nobody explained it better.

‘Right Place at the Wrong Time’ by Dr. John. A song about life, and everything in it.

‘Sometimes’ by Midnight Oil. A song I could listen for hours, and I love Peter Garrett, what an entertainer. The most obsessive.

‘Goodbye to You’ by Scandal. Don’t listen to this on the treadmill.

‘The Ostrich’ by Steppenwolf, the song that led me to a life of hopeless idealism. I love this song.