WHY RESISTANCE IS THE MORAL CHOICE 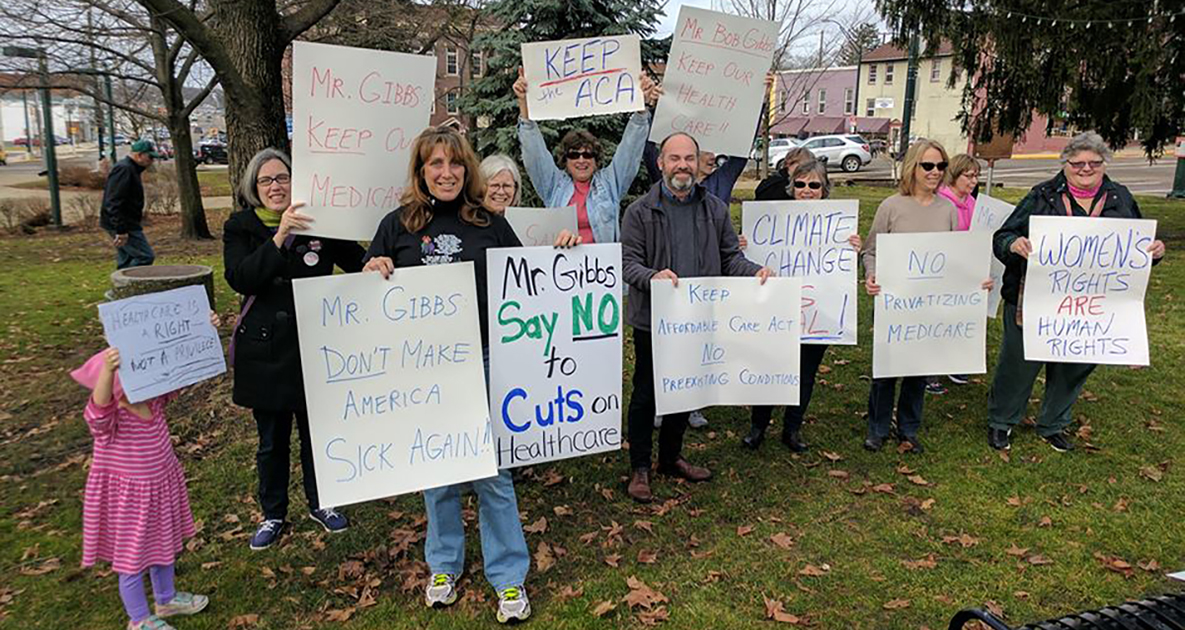 The latter was my experience this past weekend, as I stood with several dozen like-minded Ohioans to demonstrate our concern for protection of the environment in the central square of our red-state small town. Our mostly silent demonstration soon found accompaniment in the bullhorn-amplified voices of some local evangelists determined to save our souls. Or possibly just shout us down. Our small, but growing, weekly demonstrations seem to have struck a chord with some of our neighbors.

As a little bit of background, for the past four weeks, members of our local community, concerned—if not flat-out distressed—at the new presidential administration have organized weekly demonstrations in the town square. Each Saturday at noon for a half hour we hold up signs on a particular issue (healthcare, the environment, immigration). Drivers honk in support as they drive past. Some throw us a dirty look or a rude gesture, but overall the response has been quite positive.

As it happens, we have been getting some local press and decent word of mouth, which is no doubt what has drawn the attention of our new friends from “Operation Save America.” While we hold up signs saying “Don’t make America Sick Again” and “Save the Planet for our Children,” these fine individuals shout at us about the evils of Islam and declare that God will use “extreme vetting” at the pearly gates.

I am aware these men (and they are all men) do not represent mainstream Christian belief, even in conservative Christian circles. At the same time, they do represent the same religious tradition (if an extreme version of it) as the 80% of white evangelicals who opted to support the current administration in the 2016 election. As someone who grew up in the religiously conservative south, I possess more than a passing familiarity with the so-called “Christian Right.”

Yet, for all that I share a background with those on the other side of the proverbial political street, it has been a struggle these past few months to see so many people with whom I share a faith support political positions that run so fundamentally counter to my deepest-held religious convictions. My identity as a Christian and as a priest is not somehow incidental to my participation in those weekly demonstrations in the town square. Rather, my involvement is deeply bound up in my religious identity. I insist on speaking out for the cause of healthcare because I believe that all people deserve the dignity of affordable quality treatment for their medical conditions. I do not believe any individual should become burdened with overwhelming debt because they happen to have the misfortune of developing a pre-existing medical condition. I will speak out for the rights of refugees to find a sanctuary where they can live in safety and with a degree of human dignity. I believe our natural environment deserves protection as God’s good creation. These beliefs are utterly fundamental to my faith, being as I am a person who follows a teacher who declared “blessed are the poor” and “whoever welcomes the least of these welcomes me.”

These are the beliefs that are apparently so anathema to my co-religionists that more extreme representatives of their faith feel compelled to shout us down on a Saturday afternoon. A part of me would like to brush them off in my own high-minded and self-righteous judgment. At the same time, I recognize that I am as much of a mystery to conservative Christians as they are to me. Many conservative Christians supported now-president Trump based on the hope for the appointment of pro-life Supreme Court judges. For them, I am anathema—a self-proclaimed Christian leader who supports access to safe and legal abortion.

When I think about my more conservative brothers and sisters, I can find no solution to the impasse in which we find ourselves. We share a faith and, presumably, a similar conception of God. Yet we inhabit realities vastly separated from one another. If that chasm of understanding exists between myself and my fellow Christians, I can only imagine how pronounced that chasm remains among all those other self-contained bubbles that define our society. As we all try to speak into this present political reality, it can seem as though we all are just shouting at one another through a bullhorn. Our message washes over the “other side”, and theirs sweeps over us in turn.

Even as I flirt with my sadness at the chasms that divide us, I remind myself that my goal is not to shout over the people with bullhorns. My hope is that that our faithful presence week after week acts as a brief moment of solidarity for others with moderate to progressive political views who may feel isolated in such a conservative area. Maybe we remind others, including conservatives, who are uneasy with our president’s authoritarian language, that they are not alone. That is enough for me.