TRUMP DOWN THE RABBIT HOLE 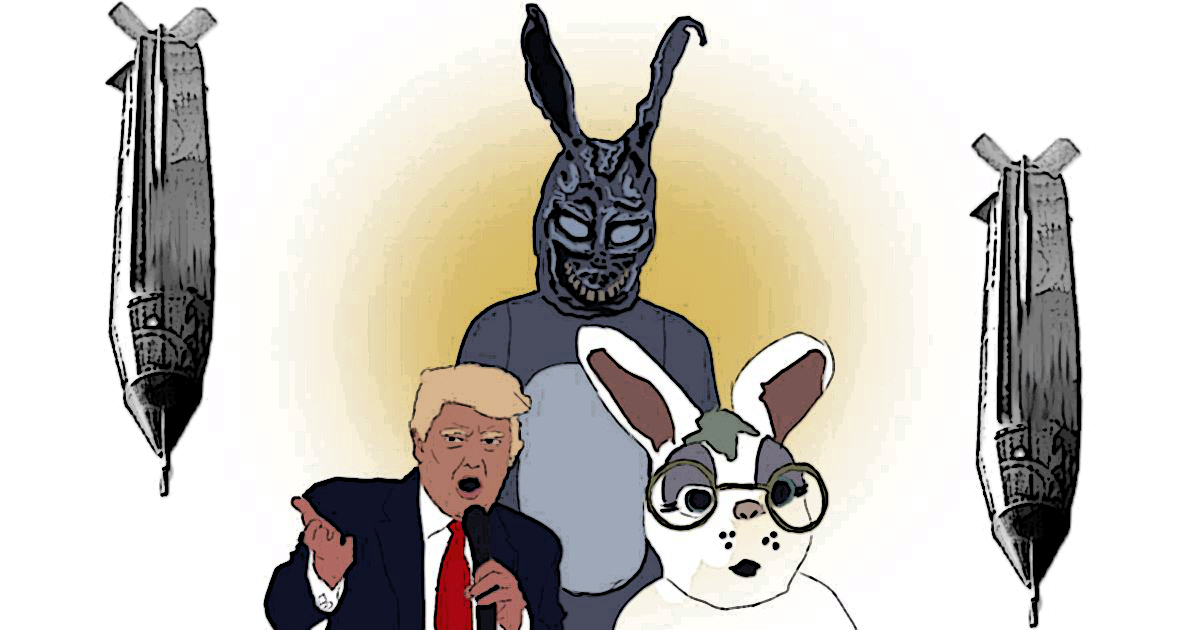 Mirror, mirror, on the wall…who’s the craziest of them all? That, in essence, is what our current geopolitical moment boils down to.

Is it Syrian President Bashar al-Assad? When that chinless, dead-souled despot was asked about his government’s use of barrel bombs, he hid the indefensible behind the nonsensical. “We don’t have barrels,” he replied. “Again, it’s like talking about cooking pots. So, we don’t have cooking pots.” A few years earlier, he gave Barbara Walters a denial that may have actually been a confession, “No government in the world kills its people, unless it’s led by a crazy person.”

Or is it North Korean leader Kim Jong Un, notorious for killing his relatives; controlling and suppressing his people; and hiding unimaginable levels of grimy deprivation and despair under precision-choreographed shows of patriotism and military might? That blubbery cipher claims to have mastered driving a car at the tender age of three, and lives in such a bubble that he’s the only one in the country allowed to have the name “Jong Un.” All other North Koreans of that name had to change it when Lil’ Kim ascended to power.

What about U.S. President Donald Trump? Like his top rivals for the mantle of most unhinged national leader, Trump is a spoiled brat who inherited money and status—and continues to live in gilded rooms and an alternative universe.

His vote may not be the determining one, but Kremlin spokesperson Dmitry Kiselyov certainly has experience with authoritarian eccentricity. And on April 16, Kiselyov announced on Russian national TV that “Trump is more impulsive and unpredictable than Kim Jong Un.”

He may be right. Sure, the North Korean leader has terrible hair and lots of missiles. But the U.S. president has terrible hair, lots of missiles—and no compunction whatsoever about contradiction or irrationality. Trump clearly believes that consistency, logic—even reality—are for chumps. I’m not saying he’s as bad as Kim Jong Un, but from what we can tell right now, Trump looks like he might indeed be the more impulsive of the two.

Some apologists try to paint Trump’s unpredictability as a strength: something that confounds his geopolitical opponents and will ultimately bring them to heel. But if you ask me, Trump isn’t crazy like a fox; Trump is just plain crazy. Or you might say crazy like Fox. (More on that later.)

Like any good totalitarian, Trump feels that things are true only if and when he says so. The twist with Trump is that he says whatever bubbles up the fetid swamp of his mind. Often, it’s something he saw a few minutes ago on Fox News, or heard from conspiracy-promoting outlets like Breitbart. Or what one of the corporate shills, xenophobes, and science-deniers in his inner circle whispered to him.

Trump spews out his spoken and tweeted scat as his mood dictates—with “scat” being the perfect term, since it implies both nonsense and feces. For instance, after countless pronouncements that the NATO military alliance was obsolete, Trump announced on April 12 that “It’s no longer obsolete.” That head-snapping reversal got even more puzzling when Trump’s press secretary, Sean Spicer, helpfully explained that the president hadn’t actually flip-flopped on NATO and countless other matters in the past week; instead, “it’s those entities or individuals, in some cases, or issues evolving towards the president’s position.” Got it? Once you unscramble the language, the magical thinking of the current White House is revealed: the universe is realigning itself to revolve around its new center, and that center is President Trump. Even Mad King Ludwig—and the Sun King himself—would be impressed.

Who can object when Trump or his surrogates toss together indigestible word salads to defend the indefensible and explain the inexplicable? The media—and sometimes they do. But too often their responses range from tepid and equivocal to enabling and outright fawning.

Unsurprisingly, some of the worst offenders in the media are employed by Fox News, which the Trump administration is nakedly angling to turn into America’s de facto state TV network. If you have a strong stomach, check out the solicitous, at times flirtatious, banter between Trump and Fox Business anchor Maria Bartiromo as they discuss the “most beautiful piece of chocolate cake that you’ve ever seen,” which Chinese President Xi Jinping supposedly savored as Trump shared an even tastier tidbit: the fact that the United States had just launched 59 cruise missiles.

With its myriad grotesqueries, the interview is classic Trump. For starters, only a tacky huckster like the current defiler of the Oval Office would attempt to turn the leader of a superpower into a tout for Trump cake. And only a fact-botching fool would describe the cake he ate while the strike transpired with more accuracy than the country the U.S. was bombing while the leaders were relishing that dessert. “Heading to Syria,” Bartiromo helpfully interjected when Trump’s self-aggrandizing blow-by-blow specified “59 missiles heading to Iraq.”

But wait, there’s more: During that mockery of an interview, the president’s penchant for dim-witted braggadocio was on full display, as when he made the claim that “our equipment is better than anybody by a factor of five.” Then, apparently recalling his past attacks on the Obama administration (and his duty to serve the military-industrial complex that President Eisenhower warned the country about in the 1950s), the preposterous leader of the free world none-too-subtly pivoted. In complete contradiction to the actual numbers, Trump threw in a line about how the military had been “gutted” by the past administration. He then gleefully returned to dishing up more delicious details about that scrumptious chocolate cake—and President Xi’s supposedly strong approval of both Trump’s dessert and his missile attack.

The Lord of Chaos

In a late 2015 debate among Republican presidential contenders, Jeb Bush proclaimed that if elected, Donald Trump would be “a chaos president.” It seemed like a chilling but far-fetched prediction at the time. Today it is a chilling reality.

The chaos-creator at America’s helm shoots from the hip in a style uniquely his own: a cross between a petulant toddler and Tony Soprano. For instance, during the campaign, he made a none-too-subtle threat to Jeff Bezos, the owner of The Washington Post. After complaining about that newspaper’s coverage of his campaign, Trump warned that if he made it to the White House, Mr. Bezos’s primary business, Amazon, would have “such problems.”

At moments like that, Trump talks like a swaggering Mafioso; but at others, he sounds like a fledgling punk who hasn’t quite figured out how to bluster like the big boys. And he does it at the darndest times. For instance, there’s this recent announcement, which probably didn’t resonate with the pastel-clad youngsters and parents awaiting the frolics at this year’s White House Easter egg roll: “We will be stronger and bigger and better as a nation than ever before. We are right on track. You see what’s happening, and we are right on track.”

The mismatch of message and audience was bad enough, but it gets truly bizarre when you consider the optics: Trump delivered that simple-minded pep talk standing next to a bespectacled, man-sized bunny. The rabbit’s mouth was frozen in a perpetual gasp—as if maybe it had just watched “the mother of all bombs” explode over Afghanistan, or listened to one of Trump’s truth- and language-mauling speeches. And people think Kim Jong Un is the ridiculous one?

Asked at that event if he had a message for the North Korean leader, Trump paused for a statesman-like moment, then barked, “Gotta behave.” When I heard that, my mouth probably looked a bit like that bunny’s.

The Political is Personal

Trump turns the adage “the personal is political” on its head. For a thin-skinned egoist like him, a more apt observation might be “the political is personal.” Trump has proven himself to be someone who judges everything—including people, policies, and world events—by how they make him look and feel. For instance, he consistently claimed that any intervention in Syria would be misguided and potentially disastrous. Then he apparently had a visceral reaction to the horrifying images of children killed in this month’s chemical weapons attack—and those oft-repeated, loudly stated convictions flew out the window.

Three months in, it looks as if Trump’s presidency will be a haphazard mix of presidential control (all those damn executive orders) and delegation. As expected, much of that delegation is to minions seeking to undermine the institutions they were named to head, like Scott Pruitt of the Environmental Protection Agency. And in yet another contradiction, the candidate who ran on an anti-interventionist “America First” policy is now giving free rein to a U.S. military that’s long been itching to play with its expensive toys.

When Trump was asked if he’d personally authorized the dropping of “the mother of all bombs” on Afghanistan, he said this: “Everybody knows exactly what happens, so—and what I do is I authorize my military. We have the greatest military in the world, and they’ve done a job as usual, so we have given them total authorization, and that’s what they’re doing. And, frankly, that’s why they’ve been so successful lately.” No need to resort to Google’s gibberish translator, I can help out here. Trump’s saying, “I’ve given the military total control. Plus, I like saying ‘my military.’”

Bad as it is that the commander-in-chief is letting the generals run the show, it’s probably better than if he did it himself. Consider this exchange between Trump and Bloomberg reporter Mark Halperin during the presidential campaign:

How’s that for insight? However, Trump did say something prescient about global security during his campaign. He opined in one of the debates that “The biggest problem we have is nuclear — nuclear proliferation and having some maniac, having some madman go out and get a nuclear weapon.”

We’re facing that terrifying scenario today. And Kim Jung Un isn’t the only one. There’s also the current inhabitant of the White House, a man who has said this about nuclear power: “the devastation is very important to me.”

Bashar al-Assad and Kim Jong Un have strangled their own countries to keep their stranglehold on power. Hundreds of thousands have died, and many more have suffered oppression and privation that are unimaginable to Americans. And fortunately for those Americans, their president doesn’t have anything like the unfettered power of those two dictators.

Sure, Trump is sweeping away all the oversight bodies, regulations, and watchdogs he can. But so far, the nation’s most critical checks and balances are still holding. The courts have put the breaks on the Muslim ban. Our “free press” seems ineffectual, even complicit at times; but it hasn’t disappeared entirely.

America’s newly roused progressive citizenry may be the strongest bulwark against Trumpian authoritarianism. Countless marches, political actions, phone calls to Congress, and email- and letter-writing campaigns have demonstrated that there’s widespread and passionate opposition to the new regime. The country’s leaders are hearing that outcry, whether it’s Democrats whose spines were strengthened by thousands of calls demanding a filibuster of Trump’s Supreme Court pick, or Republicans who abandoned Trumpcare after being screamed at by constituents in town halls.

Unsurprisingly, the only one who seems oblivious to the people’s outcry is Trump himself. The day after an estimated 120,000 marchers in more than 200 cities protested his refusal to produce his tax returns, Trump tweeted, “Someone should look into who paid for the small organized rallies yesterday.”

Ah, Donald. Maybe you’re better off sticking with what you know…like cake. It did wonders for Marie Antoinette. And I hope it does the same for you.