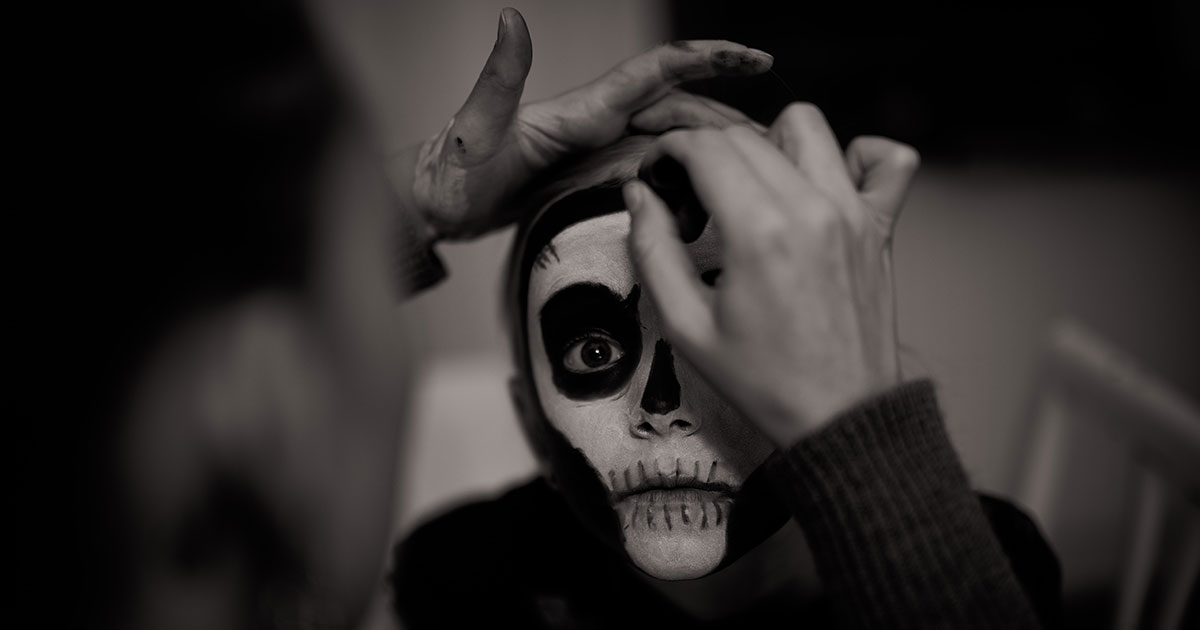 I never really got Halloween, growing up. I lived in the country, and we didn’t do a lot of Trick-or-Treating because we didn’t have neighbors nearby. You couldn’t walk door-to-door. And going into town was intimidating. I felt like an outsider. I felt like they could smell the country on me.

Also, there was my own family drama. My mother wasn’t able to take me, and my father wasn’t willing. I went with my older sister some, but mostly so that she and her friends could have a share of the candy. I remember one Halloween I didn’t have a costume—I don’t remember ever having one that wasn’t homemade until I was a teenager and bought my own—more on that later. My sister suggested I dress up in some of Mom’s old clothes. I didn’t want to, but she and her friends badgered me until I relented. I looked like a bag lady in outdated clothes from the back of our mom’s closet. That was the goal, anyway. Then she took me around to some houses of other members of our mom’s church. I was embarrassed not just because I was dressed up like a woman—this was a repressed, in-many-ways-backwards community, and any deviation from the norm was met with derision. I was supposed to be a superhero or a fireman or something manly—more importantly, something bought and “fancy.” But I had a homemade costume. (It was almost as bad as the time we’d cut holes in a sheet to be ghosts, but couldn’t find any white sheets, so we were patterned ghosts. And, of course, got in trouble for cutting holes in sheets. That time, we didn’t go Trick-or-Treating; we stayed home to wait for neighbors who never came.) I only remember going to one house as a bag lady, and I don’t think we went to more than a couple. I was so embarrassed, I made them take me home.

The people in my mother’s church and other people at school put a lot of stock into appearance and status, when I was growing up. We were poor. We lived in the country—in the middle of a cow pasture. Our family was weird and dysfunctional. I never felt like I belonged, and going door-to-door, asking for candy seemed like something a crazy person would do. I imagined they would see me at their door step and close the door in my face.

The only time I remember going Trick-or-Treating in a traditional sense was when I was a young teenager. Some friends and I went, on a lark. I bought a mask and dressed up like Sloth from the movie The Goonies. Some houses gave us candy. Some lectured us for being too old. That’s the clearest memory I have of Trick-or-Treating, other than how every year, I had to sit at home with a bucket of candy to give out and no one ever came to our door.

My daughter loves Trick-or-Treating. She loves dressing up in the costumes—they’re always homemade and imaginative. Partly, this is because there aren’t necessarily costumes available for the things she wants to be. Partly, this is because store-bought costumes are often kind of crappy and expensive. She gets so excited about the planning and designing and construction of the costumes. One year, she went as a dragon from the How To Tame Your Dragon franchise. Her mom rigged up an LED light to emulate her fire breath. But sometimes she wants to be simple things like a white cat. When I was growing up, it had to do with whatever fad was going on. If you weren’t dressing up as the newest movie character, you were poor, and there wasn’t much that could be worse than that. She has avoided that whole nonsense entirely.

I love taking her door-to-door. She gets so excited, I have to remind her to speak, and when she does, she never wants to stop. She and her friends show off their costumes to each other. They travel in a pack, while the parents all sit back, wishing we had a flask to share. Seeing her like this, safe and young against the night, I finally understand what Halloween is supposed to be about. It’s about candy. And playing dress up. And being a kid. She can be anything she wants without fear of recrimination. If she wants to be a warrior or a kitty cat or anything else, she can be for a night and then go back to being a little kid. Because that’s what she wants to be right now, and that’s fine. There’s no need to grow up any faster.