To Save Lives, Remove Trump from Office 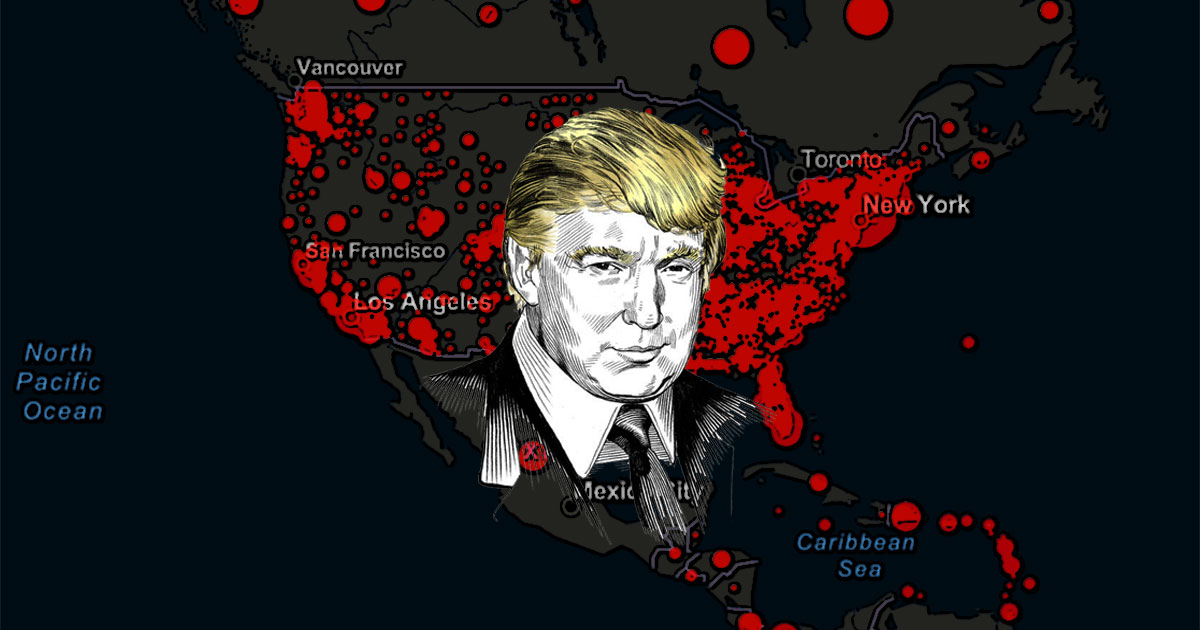 As the tidal wave of the coronavirus sweeps across our planet, politicians, at least here in America, talk about “meeting the moment.” Well, boys and girls, the moment is here…and we sure as hell are not ready.

I write this on March 26, the day America surged past Italy and China to become the nation with the most confirmed cases of COVID-19, the disease caused by the novel coronavirus. The fact that we’ve reached that grim milestone is especially terrifying when you consider how little testing we’ve done here in the United States. We have absolutely no idea of how prevalent the disease is in our communities, but we do know that the U.S. is currently experiencing the world’s sharpest spike in confirmed infections, even steeper than what we saw in Italy. And bear in mind, despite having universal healthcare and far more hospital beds per capita than America has, Italy’s medical system is buckling under the weight of the outbreak there, with horrific consequences.

One thing is certain, however: In this time of fearsome crisis, we are grotesquely ill served by the occupant of the White House. But when anxious, largely housebound, Americans tune in for updates on the pandemic that’s upending their lives, that’s generally who pops up on our screens, delivering not news, but shambolic pantomimes best described as unreality shows.

Our delusional sociopath of a president sees no contradiction in saying that 1) COVID-19 cases are “going very substantially down, not up,” and will soon reach zero, as he assured us in February; and 2) “I always knew this would be a pandemic,” as he claimed in March; and 3) “nobody ever saw this coming,” which has been a consistent refrain—even though anyone who watches the news had a pretty fair guess.

As Trump contradicts himself with dizzying and depressing regularity on the severity of the pandemic and the steps needed to address it, there is one constant to his message: He is doing an absolutely top-notch job. He endlessly congratulates himself for “moving at record speed” despite the obvious fact that America lags far behind other industrialized nations in terms of testing capabilities; not to mention the vital supplies that medical professionals desperately need. He also incessantly takes credit for his ineffective order to restrict travel from China and Europe: “Call it luck or call it talent, I made a great decision.”

Maybe he’ll stop crowing about that now that America has surpassed the number of cases in China and Italy. But then again, you can’t put anything past Trump: Tomorrow he may be pumping his fist in the White House Rose Garden and yelling, “We’re number one!”

Which Circle of Hell Is This?

The routine at Trump’s daily briefings on the epidemic is depressingly familiar: First, Trump fulsomely praises himself; then he calls on members of his coronavirus task force to come up to the microphone and praise him. Some do so with lickspittle relish, notably Vice President Mike Pence, who apparently is gay for no man except Trump.

Tasked with coordinating America’s coronavirus response, Pence is short on straight answers or specifics—not to mention the supplies needed by frontline personnel fighting the pandemic. But he does pack a formidable arsenal of responses that start off with sentiments like “Because the president made the bold decision to…” and “In yet another example of the president’s astute leadership…” The goal is to convey Trump as infallible and omnipotent to support his cult of personality. But really, who could worship that personality?

Others on the coronavirus task force seem more reluctant to participate in these cringe worthy displays, but they stick around, nonetheless. An exercise that helps me get through the Trump’s daily drive-by of truth is categorizing his accomplices. OK, I’ll tell myself, that dude is a total loyalist, but going by his expression, even he can’t believe that Trump just went there (maybe talking about “Chinese viruses” or “sleepy Joe Biden” when addressing literally life-and-death issues). And that one, I’ll think, that one is aghast at the very existence of this president, but is sticking around because she wants to save lives.

Those in the later category do it with less frequency than the toadies, but they, too, do their part to billow the capacious sails of Trump’s ego. They do it because that’s the only way to avoid the banishment that would mean they no longer have any influence over the national response to the pandemic. Unlike the eager Pence, they may pay obeisance to the president with dead eyes staring into space—but they do it.

As do the governors of the states that have been hardest hit by the pandemic so far. Although most have been Trump critics in the past, they now try to mouth the words the president wants to hear. Because if they don’t, more people in their states will die. Trump recently made that explicit: “You want ventilators and masks from the federal government’s reserves to treat your citizens? Well, governors have to treat me well, it’s a two-way street.” For those of you who don’t get Mafia-speak, the translation is: “I will off your people unless you stroke my ego.”

Ostensibly a nod to the importance of social distancing, this week’s Fox virtual town hall was essentially a test run for the establishment of a state-controlled media. Although in Fox’s case, it’s hard to say if the state is controlling the media, or the media is controlling the state. Consider the chilling feedback loop that led to Trump’s about-face on the feasibility of encouraging people to flatten the infection curve through social distancing and staying largely at home, which has pretty much become the standard coronavirus response all over the world. Last Sunday night, Fox host Steve Hilton made this observation about the economic and social impact of those shutdowns: “You know that famous phrase, the cure is worse than the disease? That is exactly the territory we’re hurtling towards.”

Although it flew in the face of the advice he’d been getting from public health officials for weeks, Trump, who cares about money far more than people, seized that idea. That same night, he boiled it down to a tweet: “WE CANNOT LET THE CURE BE WORSE THAN THE PROBLEM ITSELF.”

Trump has always had a problem with experts (himself excluded, naturally), and just as in the past he’s sneered at the “so-called experts” who promote daft ideas like global warming, social responsibility, gravity, and a round Earth, Trump is now turning on the epidemiologists. This week he made an abrupt shift from bragging about how his team has the biggest, shiniest eggheads of all to mocking them and casting jeering doubt on the social-distancing measures his own government is promoting. You can imagine how that might be confusing to Americans, and undermining efforts to help us understand that social distancing is literally deadly serious. But hey, chaos is Trump’s brand.

“Somehow the word got out that this is the thing we are supposed to be doing,” he recently said about social distancing. Um…maybe that “somehow” is the goddamned postcard all Americans received in their mailboxes this week labeled “PRESIDENT TRUMP’S CORONAVIRUS GUIDELINES FOR AMERICA.” (And you knew it really came from Trump because of the all caps.) 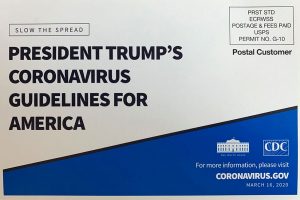 This week Trump also said, “There were theories that we’d be shut down for four or five months, I don’t know how that got out there.” Mr. President, might it have been the press conference you gave on March 16 when you announced that the fallout from the coronavirus crisis could last until July or August? Since that triggered the biggest stock market slide in more than a decade, I’d think you might remember that.

Trump’s attempt to insulate himself from the financial and social upheaval of the COVID-19 pandemic would be laughable if it weren’t so dangerous. At this week’s Fox town hall, Trump said that “I’d love to have country open by Easter” adding that he’d like to see “packed churches all over our country.” Yes, packed churches in a country that hasn’t yet reached the apex of its pandemic. Thank god I’m an atheist.

Under his new “let’s-save-the-economy-by-killing-people” ™ strategy, Trump is trying to shift blame to governors and mayors, who are signaling that they’ll keep social-distancing restrictions in place to protect their citizens. Sure, those governors may save lives, but those killjoys are no fun. America may have more confirmed cases of COVID-19 than any other nation on Earth, but darn it, Trump wants to go on an Easter egg hunt!

The fact is, no wealthy country is less ready to meet the challenge of coronavirus than the United States. And perversely, the reason for that lack of preparedness is wealth—specifically, the kind of wealth that that has warped American society in recent decades: predatory capitalism.

It’s predatory capitalism that leaves the U.S. the sole country in the industrialized world that doesn’t offer residents healthcare as a human right; instead, we ration care based on the ability to pay. Our current dysfunctional patchwork of for-profit and public insurance leaves about 28 million people with no health coverage at all—and even more with inadequate coverage that leaves them leery of medical care they simply can’t afford. And it’s predatory capitalism that has gnawed away at protections for workers like paid sick leave and other social safety nets. In the pandemic we face, the end result is as easy to foresee as it is terrifying: more people getting sick, going to work while sick, and spreading the virus even faster and further than we’ve seen in other nations.

And Trump is the embodiment of predatory capitalism. Look at the way that despite all the blaring sirens about shortages that will cost lives, he resisted invoking the Defense Production Act, whereby the government compels manufacturers to switch production lines to make vital equipment in times of crisis. Reportedly, that was due to lobbying from big corporations and the U.S. Chamber of Commerce, and it was only on March 27 that he reversed himself and instructed automaker General Motors to begin producing ventilators — currently the only proven treatment for COVID-19. Meanwhile, without the federal coordination that would have come from any other administration, cities and states find themselves in bidding wars with each other, slowing the distribution of ventilators and other essential materials — and of course, driving up the profits of the companies selling them. But of course, in Trump’s world, that’s a feature, not a bug.

Donald Trump is running America like he’s run so many of his businesses: into the ground. But at this moment of peril, the damage won’t just be measured in dollars, but in lives. If his plan to “open the country” goes into effect next month, Trump’s incompetence and venality will be tantamount to mass murder.

And if that comes to pass, it’s worth remembering his accomplices: The Congressional Republicans who closed ranks during Trump’s impeachment to keep him in power. During this pandemic, they have one last chance to do something decent for this nation. But as recent history shows, they won’t take it.

“You can destroy a country this way,” Trump said about the social-distancing measures his administration has encouraged during the coronavirus pandemic. As things unravel, we’re learning that there is another way to destroy a country: Elect Donald Trump.