Tis the season…though many Americans aren’t feeling all that festive this year. Not too long ago, our country still inspired images (or at least fantasies) of hope and deliverance, of a haven that welcomed those brought low by troubles elsewhere and offered them a chance of improving their fortunes. But in just one year of Donald Trump’s misrule, America has become associated with small-minded suspicion, triumphant ignorance—and a towering, quasi-mythical Wall. We seem to be well on our way to a dystopia where regular folks’ aspirations are extinguished so that plutocrats’ darkest fantasies can come to life.

The definition of dystopia in the Oxford English Dictionary is “An imagined place or state in which everything is unpleasant or bad, typically a totalitarian or environmentally degraded one.” Take out “imagined” and you’ve got a snapshot of America today. Or if not today, quite possibly tomorrow.

Ask pretty much any resident of our once-fortunate land, and they’ll reel off a long list of “unpleasant or bad” things happening in the country. For most of us, the perpetual number one on our list is the Dotard-in-Chief (thanks for the nifty put-down, Rocket Man!). Each dopily menacing utterance and tweet from the Neanderthal who inexplicably occupies the White House frightens and repulses us again and again and—sorry, my phone just beeped—yet again.

But those distractions mask a far deeper harm Trump is inflicting on the country: the way he undermines national cohesion and citizens’ peace of mind with calculated race-baiting and fear-mongering. This week, his prime targets included the Latino MS-13 gang and “chain migration” (never mind the fact that immigration by those with relatives who are already U.S. citizens is how a vast swathe of non-Native Americans got here, including Trump’s own family). Next week, Trump’s little pig eyes may swivel in another direction, so that blacks, people who say Happy Holidays instead of Merry Christmas, and those ever-pesky feminists will need to watch their backs even more than they do now.

Turning to the second half of the OED’s dystopia definition—which specifies a place that’s “totalitarian” or “environmentally degraded”—I don’t like to brag, but it looks like America may be on track to become as repressive as Big Brother’s regime in George Orwell’s 1984 and as toxic as the polluted stew Margaret Atwood cooked up in her unsettling novel Oryx and Crake.

Let’s start with the OED stipulation that dystopias are often “totalitarian” places. Trump’s self-deluding vanity and limited intelligence undermine his efforts, but he’s doing his utmost to overcome those obstacles so he can turn the United States into an authoritarian state ruled by his family and the other members of his kleptocracy. Trump is undermining government (such as the regulatory agencies overseeing banks and Wall Street) and societal institutions (like the free press) while insisting that he alone can save us. Just like Mussolini before him. (Despite Trump’s German heritage, Il Duce seems a more apt forebear than his Aryan counterpart in the WWII Axis, since both Trump and Mussolini display an unusual knack for seeming ridiculous even at their most menacing.)

But again, it’s vital that we not let Trump’s oafish delivery distract us from his viciously authoritarian intent. One of the latest manifestations of that dark intent was reported by the Washington Post, though it sounds like it’s straight from the pen of George Orwell: Apparently the Trump administration has forbidden staff at the Centers for Disease Control from using the words: “vulnerable,” “entitlement,” “diversity,” “transgender,” “fetus,” “evidence-based,” and “science-based.” If there’s any doubt that the intention of banning those seven words is to undermine both inclusive impulses and provable facts, there was this handy guideline on what to say in lieu of “science-based”: “CDC bases its recommendations on science in consideration with community standards and wishes.” In other words, reality is pretty much whatever people want to believe. (And the only people Trump and his cronies listen to are know-nothing dupes and the corporations that rely on their ignorance.)

This is chilling…even more so when you consider that this kind of flat-earth thinking is being promoted at the U.S. government agency charged with this mission: “CDC saves lives and protects people from health, safety, and security threats.” How the hell are they going to do that if they’re also supposed to protect us from science and evidence? Not to mention diversity? I don’t know about you, but I’d prefer it if they keep their focus on Ebola and flesh-eating bacteria.

Like any good totalitarian, real or fictional, Trump devotes much of his time to undermining the media. He poutily suggests that TV outlets should have broadcasting licenses revoked and dismisses unfavorable stories as “fake news.” He bypasses media filters and fact-checking by going directly to his base. Of course, his tool of choice is his Twitter account, but I and millions of others have also received emails from the Republican National Committee that creepily address us as “Friend” before ominously mentioning “lists” the president is scanning—and exhorting us to cough up some cash if we want to secure our place on Trump’s “good list” before a midnight deadline. Yes, America’s current president is just like Santa—if Santa were a perma-tanned, jowly, and particularly crude extortionist. 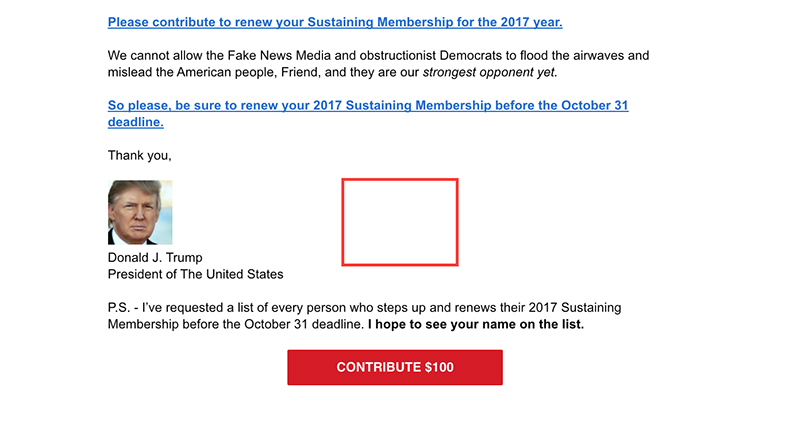 If he has his way, Trump will tick the final box in the OED’s dystopia definition by leaving America’s land, air, and waterways “environmentally degraded.” His magnum opus on this score has been pulling out of the Paris Climate Agreement. (Even war-torn Syria got itself together enough to sign the UN accord last month, so the United States is now the lone holdout on planet Earth.) Just this week, the Trump administration pointedly removed “climate change” from the U.S. National Security Strategy’s list of the global threats our country vows to combat. Trump has also issued a host of executive orders designed to undo protections for clean water and air, while promoting the most polluting energy sources, namely coal and fracking. And in their spare time, his minions are working to carve up protected lands, like Utah’s Bears Ears National Monument.

While campaigning for the presidency, Trump famously bragged “I could stand in the middle of 5th Avenue and shoot somebody and I wouldn’t lose voters.” He’s wrong about that—in some polls, Trump‘s approval rating, low from the very beginning, has recently slipped from around 40 percent down to 32 percent. (A shout-out to the sisters: the biggest defectors from the Trump camp are women. But then again, shame on you ladies for being there in the first place.)

You know who isn’t abandoning Trump, despite his daily lies and bumbling incompetence? It’s an easy one, but don’t all shout out the answer at once. Yep, you got it: Congressional Republicans! As far as they’re concerned, Trump could spend his days taking potshots at people from a window in the Oval Office (I mean actual shots using live ammunition, not the lame salvos coming from his Twitter account). At most, Republican senators and representatives might characterize the bodies piling up on the White House lawn as “not helpful” before returning to their passionate and seemingly sole concern: repaying their wealthy donors with huge tax cuts.

The tax bill being touted as a Christmas gift to the country gives honking big cuts to corporations and rich individuals while giving everyone else relative crumbs—if their taxes are reduced at all. Many groups, especially the poorest and most marginalized, will be worse off under the proposed plan. And even the modest cuts some people will get are designed to evaporate a few years down the road, while the cuts for corporations will be permanent. Not to mention the fact that the tax bill may sound the death knell for the Affordable Care Act. This “tax reform” bill stinks so bad, even the generally zoned-out American populace has sniffed out its foulness. Polls show that more than half of the country disapproves, while only about a quarter are in favor of it.

Yet this steaming turd may turn out to be the only significant legislation Republicans manage to pass this year. And they are desperate to produce something, pretty much anything, after a long year of very hard straining.

Weak as the Republicans have been when it comes to advancing their legislative agenda at a time when they control both houses of Congress as well as the White House, they are nonetheless pretty good at playing the long game. Besides all the executive orders and regulation roll-backs, Trump has made an unprecedented number of judicial appointments, including one Supreme Court pick and a dozen for the U.S. Courts of Appeals. Many of Trump’s picks are being funneled to him by The Federalist Society, a gang of right-wing cranks devoted to packing courts with similarly cranky judges. Some of Trump’s nominees have been deemed unqualified by the American Bar Association, or woefully embarrassed themselves during Senate questioning. But Trump and Co. are ramming these losers through as quick as they can, since being conservative is apparently far more important than being qualified. And yes, those judicial appointments are for life.

In the topsy-turvy world of Trump’s dystopia, even developments that progressives applaud become tainted. For instance, I wrote enthusiastically about the impact that the #MeToo campaign highlighting sexual predation was having on our society and our psyches in my last column, but the past month has shown a darker side. For some progressives, the most troubling fallout from #MeToo has been the case of Democratic Senator Al Franken, a liberal stalwart (and thorn in Trump’s side) who caved into pressure from his party and resigned from the Senate before the ethics probe he’d initially requested.

I’m not sure of all the facts in Franken’s case, but it seems pretty clear from the testimony of several woman (and some cringe-worthy photographic evidence) that Franken’s guilty of offensive and belittling behavior toward women. In an ideal world, I’d advocate for a zero-tolerance policy for that kind of creepiness. But we don’t live in an ideal world; we live in Trump’s dystopia.

And in Trump’s dystopia, I’m not sure it’s wise for Democrats to commit career hara-kiri over what seem to be relatively minor offenses when Republicans’ only scruple seems to be “Does this puppy-pelt coat make my butt look big?” (I’m looking at you, Louise Linton, wife of Treasury Secretary Steven Mnuchin. And yes, it does.)

In one of the cruelest ironies of America’s current plight, lefties like me can’t even fully enjoy the messy spectacle of the president’s likely political demise. (Such as the delectable fact that even the D-list celebrities in Trump’s orbit are spinning away from him. For instance, Omarosa—whoever the hell that is—is leaving the White House.) Because when authoritarians flail and fail, they take a lot of people with them. And if a particular authoritarian is the world’s most powerful person, he might take us all down.

Since the holiday season comes around every winter solstice, even in Trump’s dystopia, I’ll try to end on a festive note with this line from Dickens’ Christmas Carol: “God bless us, every one!” And when the New Year rolls around, let’s toss out Trump along with 2017’s grizzled Father Time. Good riddance to both.