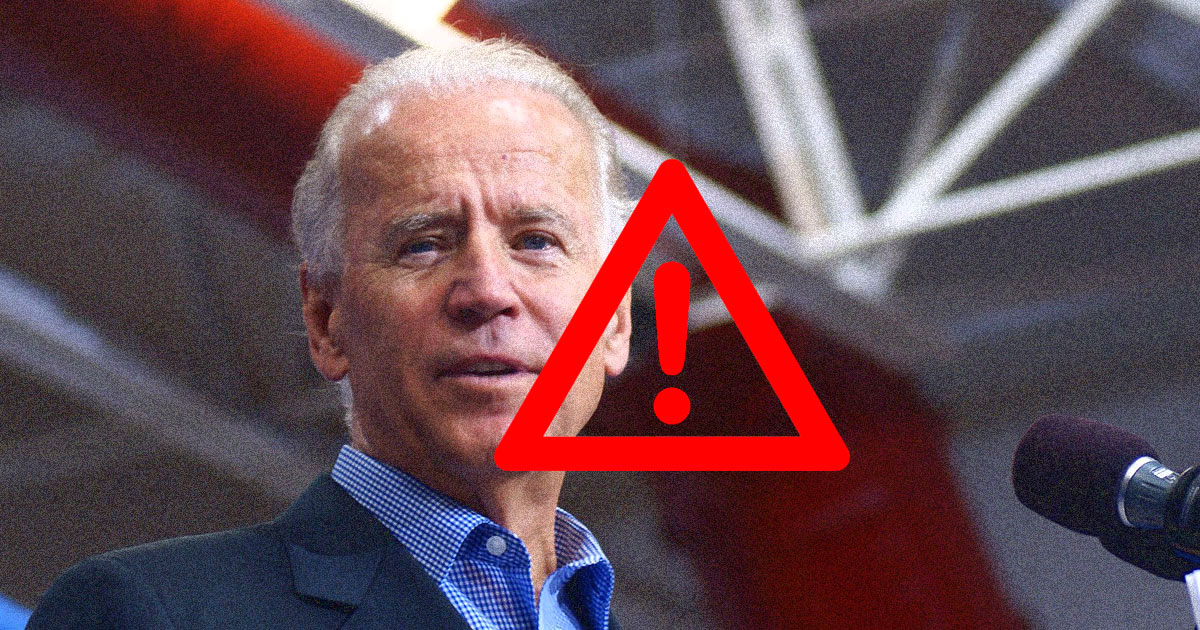 People of a certain handwringing persuasion will cluck their tongues no matter how I phrase this. And I’ll admit it: I’m trolling them with the title of this column. But let me try to forestall a bit of the clucking by saying this at the outset: Of course I’d vote for Joe Biden in a match up with Donald Trump.

I mean, if you get to weigh in on whether the monster bearing down on your city is Godzilla or Mothra, you go with Mothra, right? Your preference might be that no monsters were looming over the horizon at all, but if that’s how it’s got to be, you definitely know which one to pick.

My thinking is that at this stage in Trump’s presidency, everyone who’s paying even the slightest bit of attention knows what Trump stands for: attacks on minorities, women, the environment, democracy, science, truth, and the notion of America as a place of refuge. For his small but stubborn base, those attacks are a positive, a way to stick a thumb in the eye of the elites that sneer at them, and the minorities they fear are replacing them. For the rest of the country, Trump’s attacks on American norms are an outrage: an existential threat to the Constitution, humanity, and the planet itself.

Since there are more in the second camp than the first, I’m hopeful that just about anyone who secures the Democratic nomination in 2020 is likely to take the White House and deliver us from Trump. Except, perhaps, if that nominee is Joe Biden.

Here are my thoughts on why Biden might be the riskiest choice to become the Democrat’s standard-bearer:

I can trace my political awakening to the strong dislike I developed for Biden back in 1987. That was the year of his first abortive presidential run, which ended a month after it started when he had to pull out of the race amid charges of plagiarism. An ingénue who’d only recently become old enough to vote, I thought, “Sheesh, how on Earth could a phony baloney like that think he’d get away with it?”

Three decades on, I realize that phony baloneys do get away with things—depressingly often, in fact. But Biden isn’t one of them: Not only was he ignominiously drummed out of the 1988 race, but when he ran for president again 20 years later, he dropped out after placing fifth in the Iowa caucuses. After being swatted down so decisively a second time, it looked as if Biden might finally accept that the American electorate didn’t view him as presidential material. But then Barack Obama lifted Biden out of the discard pile, dusted him off, and resurrected him by making him his running mate in 2008: gaffe-prone but dazzlingly white Uncle Joe, waving and grinning and reassuring timorous suburbanites that the country wasn’t turning into a Zulu empire, despite the ascent of a man Biden had recently dismissed as “the first mainstream African-American who is articulate and bright and clean and a nice-looking guy.”

2) Biden may shrink, not swell, the electorate.
Many who might otherwise come out and vote in next November’s election may stay home if the Democrats thrust a corporate centrist at us in these state-of-emergency times. The Amazon is burning; thousands of migrants, including children, are crowded into concentration camps; and pretty much every American who isn’t already well-off is slipping further down the slippery rungs of what used to be an economic ladder.

Going by Biden’s past policies and current proposals, his response to these crises will be tepid at best. Don’t take my word for it, get it right from the horse’s mouth: “No one’s standard of living will change, nothing would fundamentally change,” he reassured a group of wealthy Manhattan donors at a recent fundraiser.

Statements like that are hardly going to endear him to groups that tend to think that their vote doesn’t matter because the fix is in—young people, people of color, and skeptical independents. Some of them will stay home if the choice is between Biden and Trump—and Dems may not be able to afford losing those votes.

Those who believe a centrist would be the strongest Democratic contender correctly point out that by and large, swing voters in Wisconsin and Pennsylvania aren’t as liberal as folks on the coasts. But that doesn’t mean that those voters can’t tell the difference between right and wrong. Presented with a choice between a corrupt authoritarian like Trump and a Democratic candidate who presents an authentic vision that’s the antithesis of Trump, I believe most will vote for that alternative—even if that Democrat’s vision is something that may be a little beyond the pale for them. That’s one of the ways leaders lead: They get people to think, and then maybe to change. They don’t just pander to voters’ fears or nostalgia for a past that ain’t ever coming back.

Some Biden boosters point to the fact that many polls show him doing pretty well in battleground states and with black voters in key primary states like South Carolina. But at this early stage when average voters are just tuning in to the field, poll numbers are more about name recognition than anything else. I’ll wager that if pollsters threw Kim Kardashian’s name into the mix, she’d come out on top.

3) Biden has a long track record of being the wrong man in the wrong place at the wrong time.
He first rose to national attention in the ‘70s, when he teamed up with racists like Senator Jesse Helms to oppose busing as a method for desegregating America’s public schools. The nation also remembers him from 1991: the smarmy Judiciary Committee chair who left Anita Hill out to dry with his seeming skepticism and decision not to call corroborating witnesses, basically handing Clarence Thomas a Supreme Court seat. Then there was the spectacle of his 2005 sparring with Elizabeth Warren over protecting people from credit-card bankruptcy. Warren was a Harvard Law professor and consumer advocate at the time, and Biden was a Senator raking in campaign contributions from the credit-card companies in his home state. When he couldn’t beat her in their debate, he withdrew, closing on a patronizing note: “You’re very good, Professor.” (Yes, she is.)

4) He has it wrong on the biggest issues the country and the world face today.

It’s not just the policies he promoted back in the day, like the Crime Bill and the Iraq War, that were a disaster; the policies he’s promoting now seem woefully inadequate for the challenges we’re facing. Like his quarter-measures on healthcare reform and the environment—and his non-measures on core issues like income inequality.

On healthcare, Biden stays on familiar ground: hitching his wagon to Obama, and hence, Obamacare. That would be forgivable (and Obamacare has improved health coverage and outcomes for millions of Americans), but what’s not forgivable is the way that Biden borrows Republican scaremongering tactics to frighten Americans—particularly senior citizens currently on Medicare—about universal healthcare programs like Medicare for All. It’s a cynical and, to me, unforgivable manipulation of people’s fears.

When it comes to the greatest challenge that human beings have ever faced, the climate crisis, Biden’s response is the weakest of the major Democratic contenders. He embarrassed himself at CNN’s Climate Crisis Town Hall, spewing out generalities like “as rapidly as we can” and “do what is necessary” while staying away from specifics. The one or two times he tried to go there, he went horribly wrong, stumbling over numbers, even units of measurement.

Biden’s low point at that town hall came when an audience member asked about a fundraiser Biden was attending the next night, co-hosted by a guy who’d co-founded a natural gas company. Biden sputtered something about SEC filings and other technicalities that he claimed mitigated the hypocrisy of attending that fundraiser after signing a pledge not to accept contributions from fossil-fuel producers. But despite the shaming and subsequent public outcry, Biden didn’t skip the fundraiser. He went, blathering on about climate change as “an existential threat” as the big money types in the room reached for their checkbooks, secure in the knowledge that Biden was being Biden: mouthing the right words (well, those he didn’t garble) while pocketing their dough and preparing to do their bidding.

5) “Safe” often leads to sorry.
Look how well the “safe” choice has worked out for Democrats in the past. Let’s see…there was Al Gore in 2000; John Kerry in 2004; and Hillary Clinton, first in 2008, then again in 2016. How many of those “safe” choices became president? And arguably, all were stronger candidates than Biden.

Instead of looking for a “safe” candidate, I’m a believer in the Alexandria Ocasio-Cortez model of Democratic electoral success: You win not by tepidly pandering to the middle (Biden and Amy Klobuchar are the best exemplars in the current field), but by going bold to inspire and expand the electorate (which Bernie Sanders and Elizabeth Warren seem to have the best shot of pulling off). Right now, Democrats are split between those safe-versus-bold philosophies, and there’s plenty of animosity between the two camps.

That’s completely understandable: Each side is terrified—literally life-and-death terrified—by the prospect of four more years of Donald Trump. But rather than driving ourselves crazy trying to assess electability—a quality that seems impossible to predict in a world where Donald Trump can win a presidential election—let’s allow the voters to tell us what they want.  As the primaries advance and voters get a chance to weigh in on the candidates, they’ll guide the Democratic Party toward the approach that will yield the best chance of success. And when we get to the general election, I am hopeful that the two camps will put aside their differences and work like hell to end the hell of Donald Trump’s presidency.

I think we can do it, and I pledge to do my part. Even if that means I have to start knocking on doors for Joe Biden. But my hunch is I’ll be handing out flyers for Warren or Sanders instead