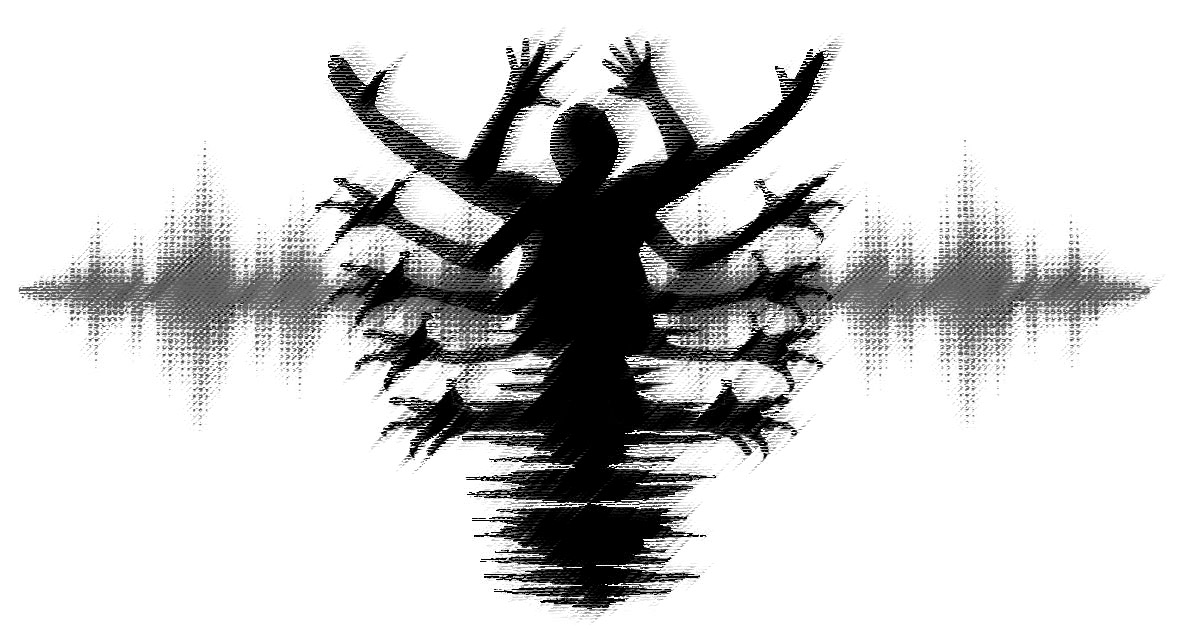 The Night I Gave Birth to Sound

The night I gave birth to sound I was alone, and no longer felt the solace in long summer nights. Those long nights that felt like their own day. My comfort, parked in the abandoned lot, was picked apart and replaced with the dark shapes that only existed at night. Figures that pressed against the foggy windows, watching me grimace and moan. Figures that slithered away from dim lights, cackling with the roaring muffler that hung low. That roaring pulled me back into the seats—my skin piercing the fabric—I became paralyzed in the noise. The noise that boomed and crashed and rang. The noise that shook and twisted the metal. The noise that tried but failed to silence the commotion of me giving birth to sound.

I gave birth to sound. A sound I never heard before. A sound that pulsated and harmonized with my own heartbeat. No longer was it just a painful blister. A growth on my pubis that expanded and stretched and widened, which I hid under baggy clothes and with vacation time. For months, terrorizing my groin, I carried the growth with my supporting limp; dragging my right foot behind me. A secret surprisingly easy to keep until the pain. The agonizing pain. Until the months passed like an expiration date. The bump was a cocoon, harvesting a being that spilled out like an egg’s yolk. Crawling out of its womb that invaded my body, groped my impotence, and infected my privacy. Faint cries pinched my nipples. Nipples that swelled and milked like treason. A stranger poked out its head as I gave birth to sound.

Crying and screaming the sound shrieked, thumping on the radio’s frequency and flickering what remained of my headlights. I tried my best to capture deep breaths but I continued to choke on the air. Air disappearing in this small space whose walls were closing in on me, watching me. Push…I have to push the sound out of my body. My penis coiled inward the more I pushed, giving birth to sound. I pushed until I couldn’t push anymore. I pulled at the sound, snatching it by its head, yanking it until it was completely removed. Tugging until I was released from my sentence. Freed of my anchor. Drenched in my blood and pus, I held the sound. I stared into the eyes that stared back. Dozens of eyes that looked like mine, revolving and wading in its malleable skin. Several arms and legs that did not look like mine, thin, veiny and metallic, twinge trying to escape the smothering dark slime.

Holding it in my arms it screamed. A shrill scream that matched the clicking sound its legs made rubbing together. Clicking that quickly became monotonous. I wanted to scream and cry back at this stranger but I couldn’t. The sound stopped crying and yawned, holding on to me familiarly. I winced in disgust but I could feel its need. Phallic antennas protruded from its soft shell, caressing the new world around it. What looked like its jaw unhinged and fed from my chest. Feeding with rows of teeth that like grappling hooks had desperately, but trustingly, hung its head. My own biology betraying me, taking side with this monster. I sat in the parking lot obeying sound. Not moving to wake sound. Hoping sound would notice my submissiveness.

Was I supposed to keep it? Was I supposed to want it, to feed it, to care for it? Was it supposed to be something I recognized? Humming and buzzing while sleeping on my chest; hardening by the second. Becoming more metallic and chrome looking than before. Its sharp legs and spongey antennas continuously moving though it slept. Its large mouth drooling, quivering in the exposure to everything around it. Was it supposed to be so vulnerable but frightening? Would it grow to swallow me whole if I kept it? Taking everything it wants from me. Feeding no longer from my breasts but my skin and hair. Ripping me limb from limb, devouring the flesh off my bones. Watching me slowly die with its dozens of eyes. Eyes that it stole from me. Questions that haunted me the night I gave birth to sound. Questions that haunt me even more the longer I keep it.

Robert Taylor is a student, who is pursuing his passion for writing. He loves all genres of writings and films, but has a soft spot for weird science fiction, finding inspiration from writers like George Saunders, Laurie Anderson, J.G. Ballard and countless others.  He lives in Long Island, New York.