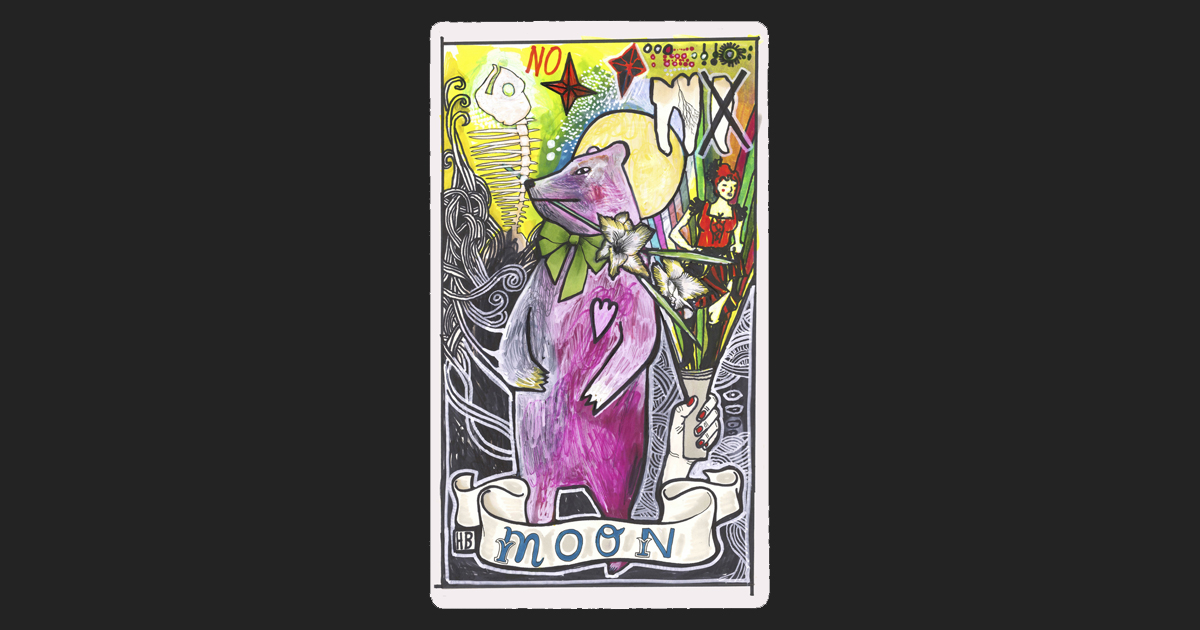 We told the one about the bear in the woods.

A green ribbon around his throat. A mouth
full of gladiolas. A single cracked tooth.

We didn’t mean to pull the ribbon

but you know how it is. You ask and you ask
and still the bear says no.

Besides, it was the way he came from the river.

Salmon-gleamed like the girl at the last saloon
her skirt hitching and winking.

His skull as fast and yellow as the moon.

Now I sleep with the bear’s tooth
beneath my pillow. My heart thrashing at footfall.

The reek of pollen and meat in the black.

We gather round the torch, tell the one
about the door left open.

The bear would not come but we invited him

with that tug. We said we were curious
but the truth is I knew what would happen.

Can you hear it?

Hot breath and fish bones on canvas. The tent
flickers and I raise my hand to the door.

Fool’s Journey’s first incarnation was as a one-on-one witchy performance at the Stadtsprachen literature festival. I’d lure people into my little cave, where I’d feed them schnapps and cast spells upon them and have them pick out a tarot card. Then I’d blindfold my trusting listener and whisper a poem into their ear.

That was their destiny for the night.

Each poem corresponded to one of the cards of the Major Arcana—the 22 big hitters of the tarot deck. Major Arcana cards are supposed to represent the archetypes of the self, life lessons we all must learn, but they can also summon a mood, a curse, a plan for your evening.

I figured these poems would make a fun little chapbook, but by the time I got around to compiling it, I wasn’t happy with the pairings. It was a year and a half since the performance, and a bunch of the poems had found homes in another collection, while others felt old and thumbed and not part of my life anymore.

Still, the concept made me happy, so when I was given a writing residency at the foot of the Montserrat mountain range, I spent three weeks crafting a new set of poems to match the moods of the cards. I wanted to feel it all: the rabid, clattering enthusiasm of The Chariot; the filthy entrapment of The Devil; the candy-sweet madness of The Moon.

Writing residencies always make me a bit strange though, that’s the thing. All that solitude and all that writing, it gets me up close with my own lunar tendencies…

So every day, I left the residency and climbed the mountain. Every night, I read articles about hiking accidents, obsessively and feverishly, and dreamed of new ways to get lost. I knew it was stupid, but I needed to be alone to think. I was alone on the mountain when the fog rolled in, when I stumbled off the path and out of cell phone reception, when I turned the corner and came face to face with the wild boar.

We looked at each other for five terrible seconds, and then I turned around and went up the mountain again.

Anyway, every day after I’d climbed the mountain, I’d come back down and drink lashings of cheap red wine. I’d sit alone in my stone-walled room, wrapped in blankets, and I’d write these poems. Then I’d read another article about deaths on Everest and fall into a deep and dreamsoup sleep.

I was alone when I wrote the poems, but the more I thought about it, the less that seemed the right choice for the book. I wanted to capture something of the theatre, the ripe colours of the tarot, Pamela Colman Smith’s wild symbols and imagery. Something beyond my own made-up worlds.

Also, truth be told, I was feeling insecure and down about my writing. The mountain was very big and the New Yorker never wanted to publish any of my stories and I didn’t have any naked friends on the residency to snuggle with. A collaboration felt like the best possible cure.

I started asking artist friends of mine if they’d like to be part of the project. The concept was simple: design a card that was based partially on my poem and partially on the corresponding card from the Rider Waite Smith deck. I gave them the card dimensions, but everything else was up to them.

What came back was better than anything I’d hoped for.

There were so many different interpretations of the same brief. Simple black ink images and lush watercolour paintings and grubby collages. Art from a ceramicist and a tattoo artist and a costume designer. Some of the artists followed the card design closely, substituting my poetic images for the symbols on the original, while others took the general spirit and galloped off in wild directions.

There were odd little coincidences too—the same tiny bird cropping up in the first and last card of the series, the same sunbeams on the Fool and the High Priestess—which you can attribute to psychic witchcraft or the fact that while these artists were making this work, they were also crawling around in my own brain. Whichever you prefer.

The Fool is the first card in the tarot deck, and Fool’s Journey is the path they take through the Major Arcana. From stumble-footed optimism, through trials and successes, to realising you have the whole world already inside you. And then going back to the start and doing it all again. I like thinking about a journey that ends where it began, but you’ve been changed by the process. I liked climbing up the mountain and then climbing back down again. I hope you like this book.

Pre-sales for the Fool’s Journey book and the super-limited-edition accompanying tarot deck will start on November 5th on Indiegogo! In the meantime, you can see the artwork being revealed every day on Facebook or Instagram 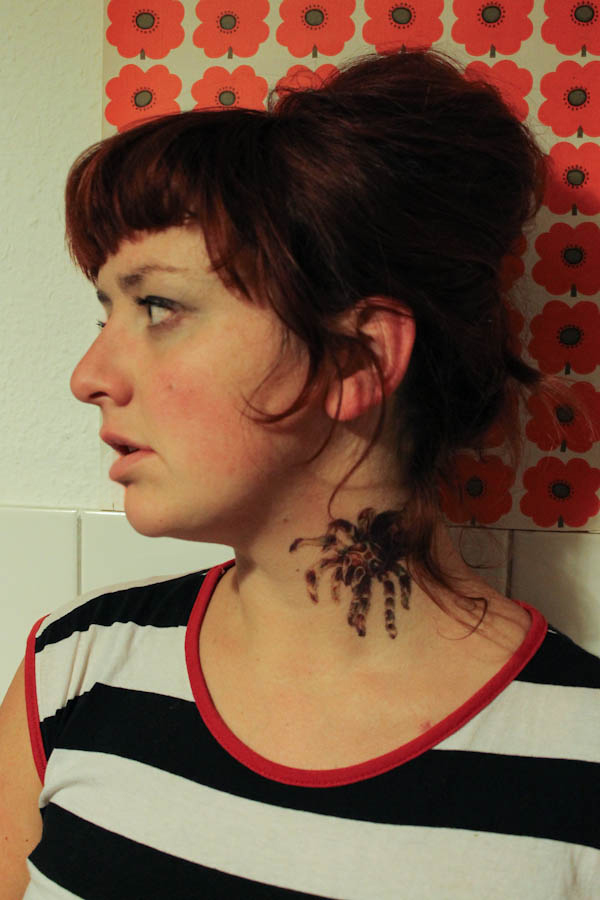 Jane Flett is a poet and a witch. She’s been published in over 70 literary journals, translated into Polish, Croatian and Japanese, and featured in the Best British Poetry anthology. Jane is the author of Quick, to the Hothouse (Dancing Girl Press) and Mashnotes (Pitymilk Press). www.janeflett.com

If you fold a bruise in half you get twice as many teeth marks! Rorschach Bruises make noises with Nintendo, cello, tarot, magic boxes, grubby queer poems, and general howling at the moon. They can’t spell their own name but they’re probably wearing really good outfits. 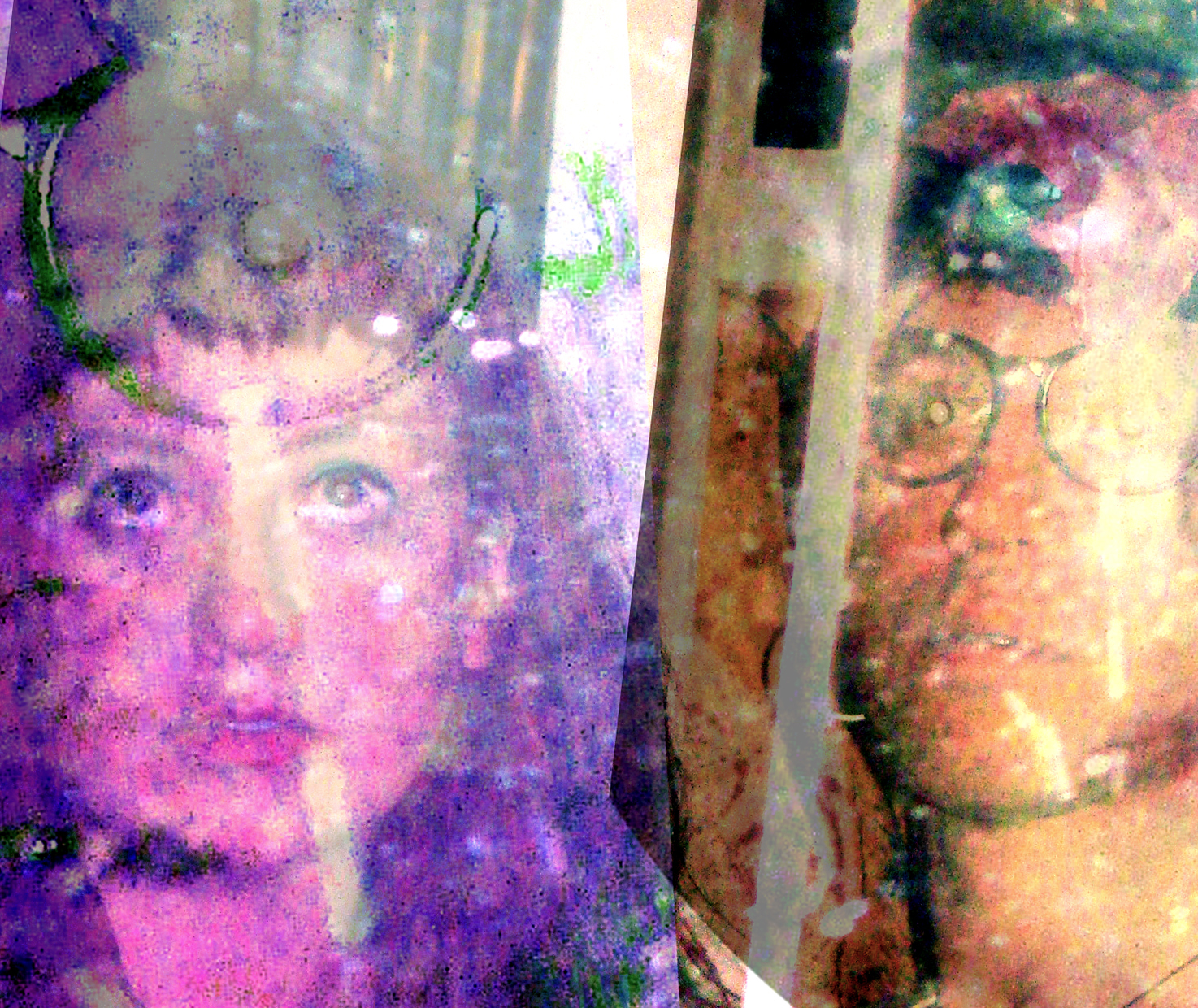 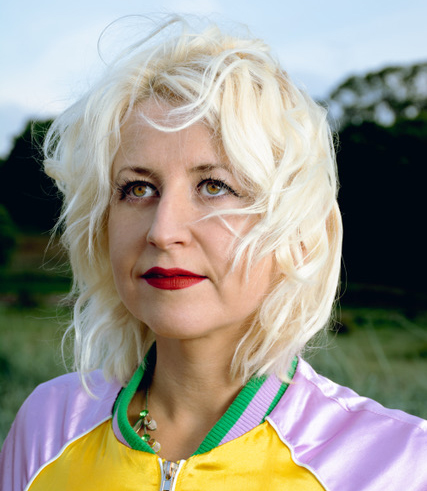 Hailey Beavis is an Edinburgh-based visual artist and musician. Working most of her adult life in a creative role with children has undoubtedly informed her untamed maximalist approach. Her most recent accomplishment is designing a newly opened bar in Leith, Edinburgh called Smoke & Mirrors.