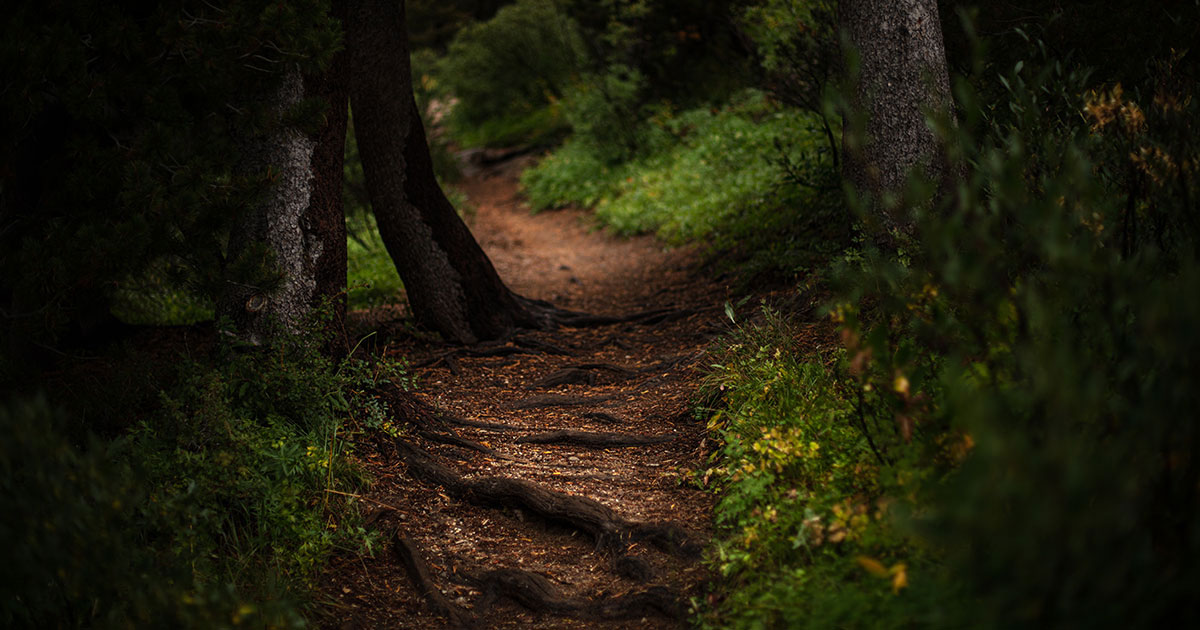 The grounds I worked on that summer backed up to old forest. Deep and green with trees tall enough to be ancient. The kind of nature I don’t mess with. Not that I believe specifically in spirits or shapeshifters. I just know I don’t know everything and I keep a respectful distance. Never upsetting anything except spider webs, startling birds from their nests. Never did anything I thought would cross some proverbial line. I did not want my initials carved into a rock to be the last anyone ever heard of me. I wanted to come back out of the woods in the evening. Wanted to make it back to my bed. I didn’t want anything to get me.

Unlike the other staff who stayed in relatively ramshackle caravans along the driveway, I was living in a tall canvas tent under the slight shade of a misshapen apple tree with only a weedy potato field separating me from those trees. It wasn’t more than a brown, clumpy stretch you could sprint across in a pinch, but it felt like a barrier. I fell asleep to birds talking in the branches. Cat hunting weasels, leaving their organs at my door like offerings. One night the moon shone like a spotlight behind the pines and I was briefly convinced of an alien landing. I was safe, but perhaps because I never went looking too closely for what might be there.

The proximity to the woods and the overall isolation of the grounds made me somewhat overly aware of any disturbances. I turned my head at every noise that broke over the regular din of families, lives, many hands and mouths coexisting. I followed around corners to find their source. Usually, it was children, a chatty lunch table, silverware clattering, nothing too far beyond normal. Except for the screaming.

Every so often a single, lung-full of agony would disrupt my gardening, stop me on my way to the lake. Sometimes it sounded low, like a large animal in labor. Other times it was quick, like a kidnapping. Startling then disappeared into the air. As my sunburn turned to tan, I learned to ignore these cries and keep walking. Knowing it wasn’t anything I needed to be concerned with.

Seminars were conducted on the grounds, run by my colleagues. Sometimes it was a dozen men in yoga pants doing intentional breathing on the lawn. Other times it was couples play-fighting on the dock. Each week brought a different influx of people, looking to stretch and swim and therapize. Which always seemed to involve howling ‘til nearly hoarse.

I remembered the practice. In college, we called it “the primal scream,” and scheduled it one midnight during exams so that all the frustrated students could collect on the quad and let out a blood-curdling yell in unison before going back to their revisions. It’s supposed to help with stress. Mostly, it was just kind of fun to scream ’til spit comes out your mouth.

Groups in the seminar would apply the same technique to expelling frustrations, grief, regret, whatever it was that caused them to come here in one long, guttural groan. While gathered in a circle, they would hold hands and together let out a single, swelling screech. Like a prayer, but louder.

Except some would scream like they were bleeding. Like they were falling victim to a stabbing, having uncovered a murderer somewhere on the grounds. Or some beast that feeds on the weak. I would think back to the trees, wondering if something had carried them off.

At first, I would turn, feel the impulse to run in their direction, being pulled by some fishing line of responsibility. As staff, we were obliged to guests. I wasn’t a security guard or a medic in any traditional, trained sense, but I was a point of contact. I could be asked for directions, fresh towels, what temperature the lake water was that morning. I could show them what doors led to the offices of actual authority. I could help in most situations.

I could come running if anything happened. I’m not entirely sure how to properly stem bleeding, but I could try, and if not, I could witness their last moments. Pass any last messages on to their kids. I learned to suppress these instincts whenever a cry rang out. It’s just therapy, I would tell myself and go back to staining the doors or sorting forks.

I quietly went about my work. Until uneventfully, something began moving underneath my feet, my tent. It started as a slight tapping, like drizzle against the vinyl of my tent. Only it was coming from beneath my feet. Just the floor settling against the grass, I reasoned. It happened again. Not wanting to raise alarms, draw the other staffers, I gasped, holding my breath, staring at the spot where it sounded like something was coming. The floor grew lumps, like pimples, overnight. Which seemed to emit more sounds of movement. Clawing.

I threw a shoe at one mound, a Nalgene at another, not wanting to put my actual body any closer. Once nocturnal, the thing that scratched seemed to grow bolder. I would watch as the space beneath my chair bubbled up, balloon then move like water-droplets do, running, snake-like elsewhere. Something maybe fist-sized was driving all this motion.

Whatever it was, I refused to scream. I didn’t want anyone to run over, find me wielding a honey jar. Having yelled, like I was being axed to death. So tight-lipped and armed with an upturned bottle, I was ready to play whack-a-mole with my new roommate.

I decided to address this intruder. Instead of wailing, I would name him. Let that be what he hears.

Which is how I took to calling this downstairs neighbor: “Jim.” I’d fall asleep, growling, “Knock it off, Jim.” And so, I survived.

Years later, I find whenever I walk at night, through darkness, the need when something moves, to ask again, “Jim?” 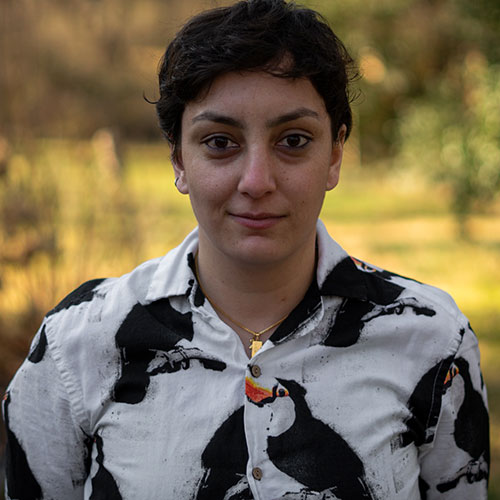 Zoe Grace Marquedant (she/her/hers) is a queer writer. She earned her B.A. from Sarah Lawrence College and her M.F.A. from Columbia University. Her work has been featured in the Cool Rock Repository, the Schuylkill Valley Journal, and Talk Vomit. Follow @zoenoumlaut