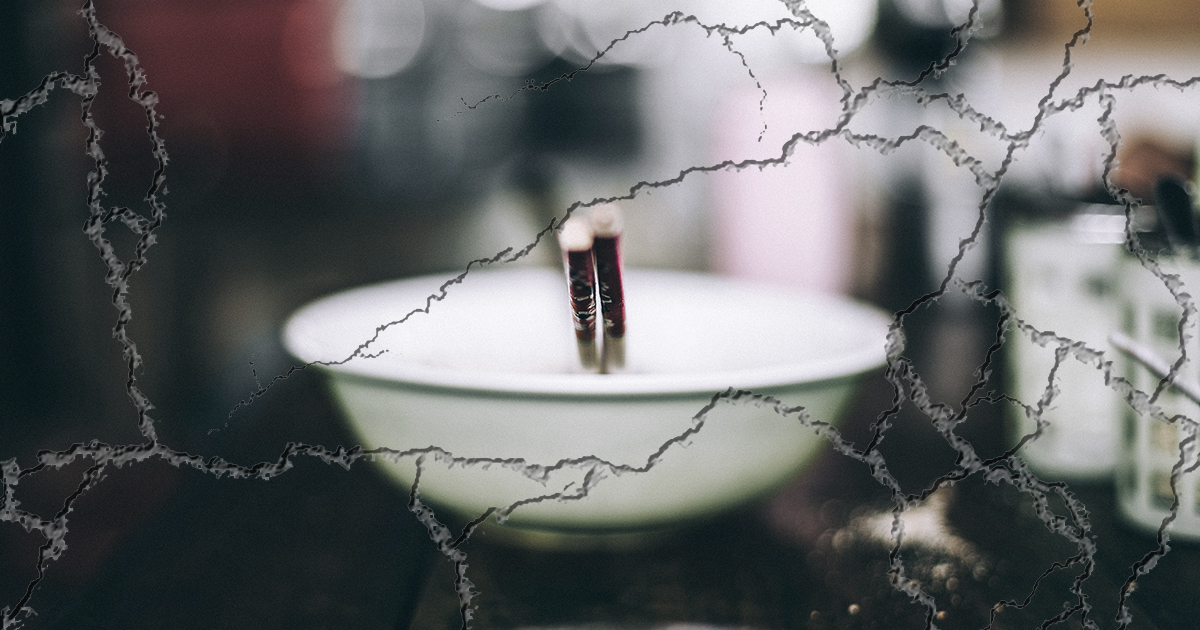 Naila is eating her favourite egg rice with Jun sitting silently opposite her. It has been a long while since Naila has had this velvety rice dish made with steaming hot white rice flavoured with a mixture of raw egg yolk and soy sauce.  The heat of the hot rice helps to cook the egg yolk gently when combined.  She loves the creaminess and the glossiness and the odd sticky feeling that forms on her lips after each spoonful. Even her little fingers are sticky now because she has been picking up the eggy rice that fell on the table.  She will then quietly slip it back into her mouth while she looks at Jun with bright eyes.  Jun has always told her that each grain of rice requires much hard work to produce.  So Naila will almost lick her bowl clean after every meal.

Although the room is poorly lit with only a few streaks of morning light sifting through the window, Jun can see brightness on Naila’s face.  She has always been a sensible and cheerful child, she never complains even though life has not been easy for her, for Jun and for many other people.  Just a few days ago, Jun heard about the boy who lived a few doors down from them, the boy who loved his yellow shorts, who used to play with Naila just outside their houses nearly every day, that he did not survive.  Jun looks desperately at Naila as fear starts to creep up her whole body.  But luckily Naila hasn’t noticed Jun’s frightening look on her face, because she is concentrating so much on her favourite food and she thinks that today must be a very special day.  Egg is especially hard to come by nowadays. There is not enough food out there and the two often have to skip their meals.  So Jun had to give up her only shawl, the one her mother gave her when she left home, in exchange for the eggs.  Jun hasn’t uttered a word.  She has been merely looking at Naila’s small porcelain-like face.  She has thinned down a bit lately because of the current situation. As she thinks this, Jun feels a sharp pain in her chest and she wants to reach out to Naila and hold her so very tightly, like when one doesn’t want to let go of something dear.  But she hesitates to do so.  She doesn’t want to alarm Naila.

‘Act as if it is just another normal day’, Jun tells herself determinedly.

When Naila finished her rice, Jun removed the wooden tray from their bed with the chipped ceramic bowl that she has taken out especially for Naila’s meal today, which otherwise would be hidden among their rag clothes to avoid being stolen.

‘People are desperate now, you can’t be too careful these days’, Jun thinks.

Naila lies down on the bed feeling a little tired, Jun lets her rest even though she knows it is time to go.  She sits next to Naila’s curled up body and softly strokes her thick black hair with her chapped slender fingers.  Jun remembers the moment when she first saw Naila, her little head was full of thick hair already, the slimy purplish body was placed on top of Jun’s chest like a rag doll, only the warmth of the tiny body reminded her that it wasn’t a doll, it was a part of her that now lived outside of her body, a new life that she has created.  Jun watches Naila’s smooth and pure face slowly distorting through her tear-filled eyes. She can look at her forever, and at that very moment, she wishes that Naila was inside of her womb again, so she wouldn’t need to do what she has planned to do, she could protect her because they would be one entity, just one.

The air outside is hot and humid, almost suffocating. Naila has her hair tied up into pig tails and is wearing a white sleeveless dress that Jun had bought with her last pack of white rice.

‘It is important that she dresses nicely’, Jun murmurs.

She holds Naila’s tiny hand firmly and they walk down the street towards the port.  The streets have already being occupied by beggars, young and old.  Some are standing or walking around to get their best chance for money or food, some are sitting on the pavements because they are either too weak or too hungry.  Although Naila has seen these people quite a lot lately, especially around where they live; but she will still look at them with uncertainty, but most of all curiosity.  Jun keeps her head down to avoid eye contacts with these beggars, she has no idea why, but all she wants is to hurry past them.  She is walking so fast that Naila is almost running alongside her in order to catch up with her.  She finds it fun though, and looks up cheerfully to her mother from time to time.

The sun scorches down mercilessly from the pale hazy sky, Jun feels the immense heat on her skin, as if it is torching her every skin cell.  And she has to narrow her eyes while walking to avoid the blinding glare on the street, her every step forward becoming harder and heavier.  Naila doesn’t mind though, she observes her surroundings curiously, lining up stones and counting trees, building things with broken twigs or singing harmony with the chirping crickets.

After a seemingly long walk, they have finally reached the fishing port. The air smells of petrol and seawater.  Even though Naila is exhausted and drenched with sweat, she is very much fascinated by the sight of docking boats and the enormous amount of freshly caught fish unloading onto the port.  It is a whole new world to her, a world that she never knew existed.  Jun can feel her excitement through her slightly shaky hand. It makes her hold on to it even tighter. When Naila shifts her attention to the people around her, she realises that not one or two, but all the people are looking at her, women and men.  Some of them are even staring with widened eyes, making her uncomfortable.

She heard about this place, the town with no children.  They said it just happened overnight. No one from here could conceive a baby after that night, even when they moved away. They are not able to have babies, and no one knows why.

‘Maybe the water here is cursed’, some say.

‘And everyone is desperate for a child there’, the others say.

Jun has started to feel very nervous, she doesn’t know if she can do it anymore.  She looks at Naila who has now calmed down a bit but who has started to look weary.  She has to do it now, otherwise Naila would ask her to take her home. Jun starts to tremble. She has been dreading this moment for as long as she could remember.  She made up her mind after she heard about this place. She couldn’t be more sure that this is the only way out for Naila.  The only thing is how can she do it?

‘How can I?’ Jun has asked herself this question a million times, but she can’t answer herself, not even once.

Jun startles and looks down to Naila whose eyes suddenly become dark and hollow.  She pulls her small and exhausted body into her arms and holds her so tight as if she is attempting to press her back inside her body.

‘Don’t cry’, Jun murmurs to herself, despite her eyes have already swelled up with tears.

She finds a bench not far from a small grocery shop and sits Naila down there.  She is holding Naila’s hands and tells her that she is going to buy some sweets for her and she should stay here and wait for her.  Naila obeys her mother as always, and sits still on the bench.  Jun lets go of her hands and turns around and walks towards the direction of the shop.  She doesn’t want to look back, she is afraid she will change her mind.

‘This is the only way out’, she reassures herself again.

‘The people here will look after her, they will’, she convinces herself.

Her tears stream down her face as she walks farther and farther away from Naila, and her heart cracks each time she makes a step further.  She is no longer sure if she has done the right thing, and she is no longer sure if she can survive this life, the life without Naila.  The world around her starts spinning and spinning at an enormous speed, so fast that she can no longer stand up properly, she falls and everything goes black suddenly. There is no light. Then there is no sound.

Jun wakes up confused, she doesn’t know where she is and how long she has been out for.  As her eyes slowly adjust to the darkness and she sees a streak of light appearing from afar, she gets up and walks towards the light source carefully as she doesn’t want to fall again. The light is coming from a room behind a door, she pushes the door open and she is shocked to find herself standing in her own home, the dimly-lit room with barely any furniture and empty shelves. To her surprise, she finds Naila lying there in her white dress, fast asleep.  She can’t believe her eyes, her heart is beating so fast that it feels like it will stop beating in any second.  Jun stands still for a good while in front of Naila before she manages to calm herself down.  After a long and deep breath, she gingerly places her hand on Naila’s face, it is warm and soft, just like the way she always feels.  Jun choked back her tears but she can already taste the saltiness on her lips.  She jumps into bed and lies next to her baby and buries her tears-drenched face in her small slim body, holding her incredibly tight.  She feels the warmth of her body, her soft breathing against her owns.  She can hardly believe that Naila is right here in her arms, as if she has never left the room.

But when the corner of her eye catches the sight of the chipped ceramic bowl, with smears of dried egg on the brim, standing on the wooden tray just the way she had left it.  A chill urges down her spine and she feels a wrenching pain deep in her heart.  She squeezes her eyes shut hastily and let out a long heavy sigh that seems to linger and echo quietly against the four bare walls without an end. 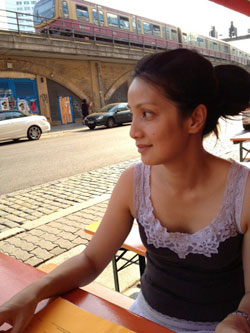 Lydia Wong is a food writer, food stylist and interior designer. She is from Macau, southeast China and lived for many years in London. She now lives in Berlin with her husband and daughter. You can follow her recipes and food stories on her blog: gingerandchorizo.wordpress.com