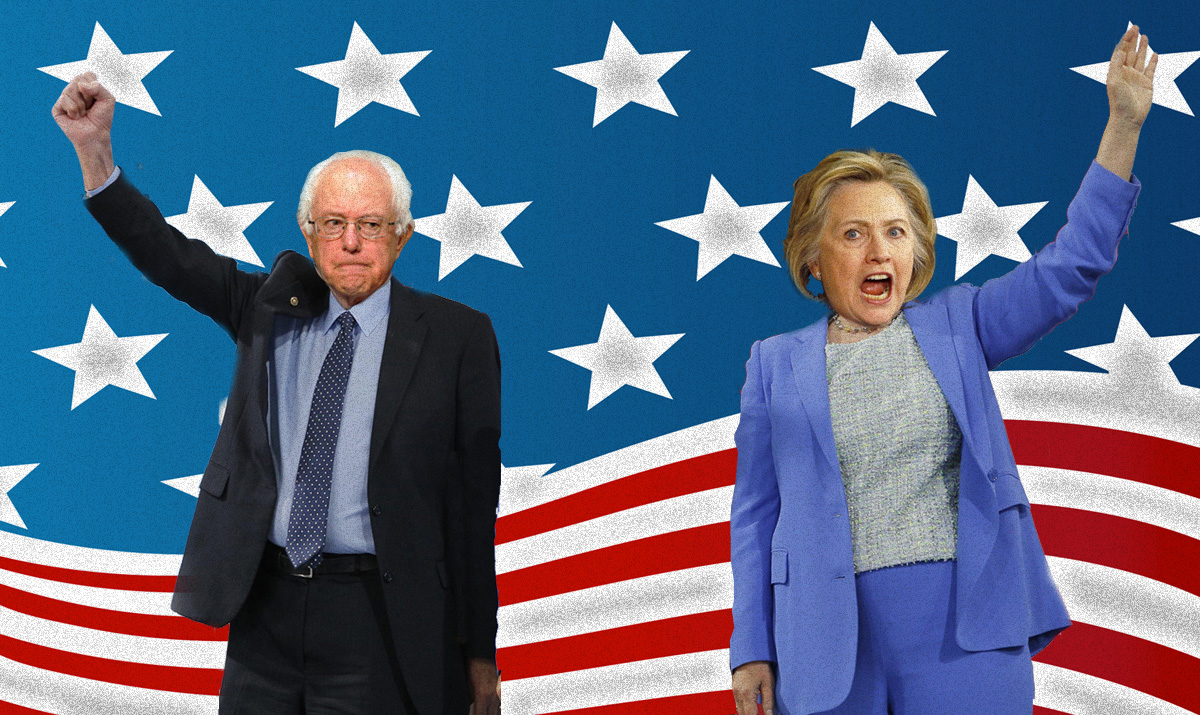 I’d originally thought about entitling this column “Hillary, Bernie, and the Future of the Democratic Party.” But given a choice, I wouldn’t read an opinion piece with that headline. I don’t entirely relish writing one, either. So fair warning: We’re going “there.” But maybe, just maybe, we may feel a bit better afterward.

Whether you were Berning for Bernie or With Her in 2016, by this stage, you likely feel a particular kind of queasy dread when you come across an article, a TV interview, or a Facebook post that reheats the over-salted emotional stew that sometimes boiled over during the Democratic primaries. In most quarters, it slowly cooled once the primaries ended, though the flame got turned up high again when Hillary Clinton lost the presidential election to the most unpopular candidate in American history. Following Donald Trump’s inauguration, the daily outrages that have been his presidency’s hallmarks have inspired many Democrats, Democratic Socialists, progressives, and independents to put aside their differences and link arms in resistance.

Then, all in one week, Hillary Clinton released her post-election memoir, What Happened, and Bernie Sanders launched his Medicare for All bill. With both of them front and center on the national stage again, the rancor and finger-pointing between their two camps are back with a vengeance. Those who were long suspicious of her point to Clinton’s book as evidence that she’s an out-of-touch elitist, a policy wonk devoid of big ideas.  And those who’ve been dismissive of him think that Brother Bernie is off on another doomed quixotic quest, one that emboldens Republicans by evoking a whiff of socialism—which, to most noses in the U.S. Congress, stinks like a fart.

Because of the aforementioned queasy dread, I initially tried to avoid anything that re-ignited the Hillary vs. Bernie wars. But it was like trying to avoid looking at disgraced Congressman Anthony Weiner’s infamous “Carlos Danger” crotch shots: You know it will do you no good, but seemingly everyone else is doing it—and like Weiner, they keep waving their provocations in your face.

As a Bernie sis who wound up not only voting for Her, but making canvassing calls once Clinton was the only candidate standing between us and Trump, I kept hearing Bernie’s exasperated “What the hell difference does it make now?” refrain in my head whenever somebody tried to get a Hillary-Bernie squabble started. I was mostly able to avoid the melee—until the media started devoting about 80 percent of its attention to Clinton’s What Happened.

Some of what Clinton says in that book jibes with my own perception of the campaign. Sexism is alive and thriving in America today, and women like Clinton who have the temerity to be powerful, outspoken, and no longer young are basically walking around with bull’s-eyes on their backs. The man who went on to become America’s misogynist in chief, Donald Trump, was indeed personally menacing to Clinton during the presidential campaign, especially during that bizarre second debate, when he loomed right behind her like a gilded golem as she rather heroically kept her cool and continued making cogent points.

And FBI Director Comey’s decisions and timing in talking about what my man Bernie termed Clinton’s “damn emails” were hard to fathom—and unquestionably hurtful to her presidential ambitions. Especially Comey’s decision to repeatedly address the topic of those “damn emails” while staying pretty mum on the far more consequential topic of what the intelligence community knew to be Russian meddling in the election. It would have been nice to know a good bit more about that before we cast our ballots. Especially when many of us were fighting over fake news planted by trolls, bots, and the other weapons in what we can now see as Russia’s undeniably successful cyberwarfare.

Watching Clinton on The Rachel Maddow Show as part of the What Happened book tour last week—and listening to her astute and withering assessment of Donald Trump’s potentially world-smashing flailing—I felt, as any sentient being must, that America would be far better off with Clinton as president. And as an individual who has dedicated most of her life to public service and knows better than most how the U.S. government works, Clinton has every right to speak out. Not only that, but we should listen, since some of what she has to say is important and instructive.

Certainly, she has Trump’s number. We see that now, in her full-throated denunciation of Trump’s conduct since he “showed up” in the White House, as basketball legend LeBron James phrased it so delightfully in a recent tweet. And Clinton delivers her indictments of the current president with a coherence that make some of us want to weep with longing for the past (President Barack Obama) and for what might have been (President Hillary Clinton).

Looking at things from a post-Charlottesville vantage point (I shudder to think how much darker things may become), it’s painfully clear that Clinton’s was one of the most articulate and impassioned voices sounding the alarm about Trump’s authoritarian, xenophobic, and white-supremacist tendencies during the 2016 campaign. It’s not that we didn’t believe her. But too many Americans—myself included—looked at Trump and thought, “Eh…never gonna happen. So no need to sweat it.”

That’s the good stuff I have to say about Clinton and her book. Now onto the stuff that might get me kicked out of Facebook’s Pantsuit Nation group. (Which, yes, I joined the autumn before the election.)

For starters, considerable swaths of What Happened sound canned, tone deaf, and overworked—perhaps unsurprising in a supposed cry from the heart that was produced in collaboration with two speechwriters and a researcher. For instance, Clinton’s talk of consoling herself post-election with chardonnay and alternate-nostril breathing probably won’t do much to endear her to Rust Belt voters.

Other parts of the book are downright infuriating. Take her claim that Sanders’ criticisms of her during the primaries did lasting damage. It seems inconceivable that a political animal like Clinton has forgotten how primaries work, but maybe she needs reminding that they involve politicians running against one another. To do that, they draw distinctions and yes, take some shots at opponents. Clinton and Obama certainly did that when they squared off in 2008. And they did so with more vehemence than Sanders ever directed at Clinton.

The charges that Sanders didn’t campaign hard enough for her—and that his bitter supporters handed victory to Trump—are even more galling. They’re so easily disprovable; they’re more worthy of Trump than Clinton.

Dream a Little Dream for Me

Part of Clinton’s problem is that, fastidious wonk that she is; she revels in number crunching, policy analysis, and market research. Those are all components of crafting good policy and successful campaigns; but they’re methodologies better suited to understanding what is, not what can be.

Which brings me to the thing that vexes me most about Clinton’s memoir—a flaw that would have undermined her presidency as well. It’s also the flaw that will doom the Democratic Party if it doesn’t learn one basic lesson: Voters like big ideas.

Clinton dismisses Sanders’ dogged calls for Medicare for all, free tuition at public colleges, and a $15 an hour minimum wage as pie in the sky. Which they are—if we don’t advocate and fight for them, if we look at the status quo and think that’s all that can ever be. In What Happened, Clinton writes, “I’ve always believed that it’s dangerous to make big promises if you have no idea how you’re going to keep them. When you don’t deliver, it will make people even more cynical about government.”

I’d argue precisely the opposite: If you want to make people even more cynical about government, keep talking about “solutions” that are simply variations on the unworkable, compromised, and often downright corrupt policies we have today.

Since everyone’s talking in sports metaphors thanks to Trump’s war on athletes who express opinions, I’ll offer this suggestion on the way to revive the Democratic Party: Go big or go home.

When Democrats first proposed the programs that are now the bedrock of U.S. civil society—Medicare, Medicaid, Social Security, and the Voting Rights Act—those programs were attacked as not only socialist and possibly communist, but positively un-American. As leaders like Franklin Delano Roosevelt and Martin Luther King did in the past, today’s progressive leaders must shrug off those charges and keep their eye on the prize.

Trump gives populism a bad name, but the kind of principled populism Sanders espouses is the way forward. What Happened during the 2016 election is complex, and it’s isn’t easy to point to a single factor. But I’ll say it again: If we don’t want it to happen again, the Democratic Party needs to go big or go home.