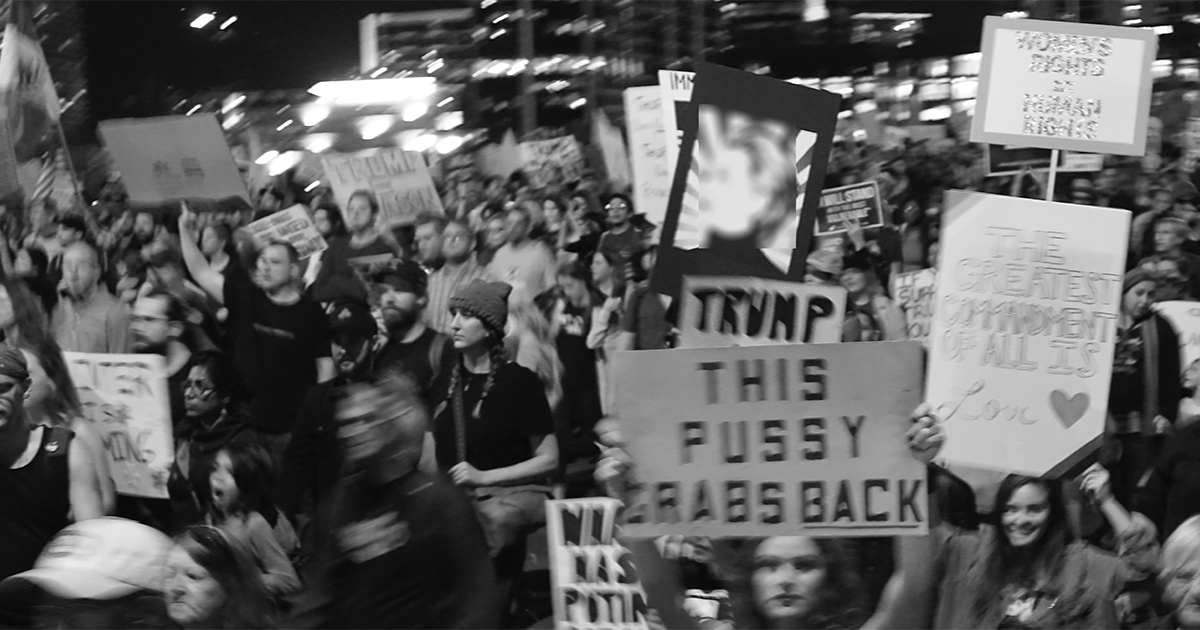 A symbol isn’t a manifesto.

But it sure says a lot.

In this case, it says: don’t mess with us.

And like the fist of the Black Panther movement, or the revolutionary workers’ movement, it proclaims resistance, and the desire for revolution.

But what does that mean, for us, today?

Where are the seeds of feminist revolution in these, the most contradictory of times?

On the one hand, there is a major global backlash against all forms of progressive thought and politics.

On the other, we’re experiencing a wave of global militancy and protest not seen since the Sixties and Seventies.

But what does feminist militancy look like in the 21st century?

I’ve been thinking a lot about this question, and it’s both difficult and easy to answer.

Difficult, because there’s no way that one issue, one group, or one person can stand for a whole multifaceted movement.

Easy, because there is so much going on in the world right now, so much activity and activism, that in a way we’re spoilt for choice.

There’s the huge women’s demonstrations that rocked the USA in 2016 and again in 2017.

There’s the massive women’s strike in Spain this year on March 8th.

There’s the wave of teachers’ strikes going on right now in the USA, with women in a clear majority in terms of participation, organization and leadership.

There’s the #metoo movement which is exposing male abuse of unequal power relations around the world.

There’s the example of Cherán, a small autonomous indigenous community in Mexico, where women have been in the forefront of resistance against corrupt politicians, drug lords and environmental destruction, creating an entirely new system of self-government in the process.

There’s the example of Berta Caceres, Honduran environmentalist and community leader, gunned down at her home for taking a stand against a land-grabbing and unsustainable dam project.

And there’s the women of the ZAD—the “zone-to-be-protected”—in France, currently fighting the obliteration of their self-determined ecological spaces by a militarized police force.

All of these examples are absolutely inspiring, no question.

But I think if I had to choose one representative of inspiring feminist militancy at this point in time, it would be Anna Campbell.

Anna Campbell was 26 when she was killed, in early March, 2018, defending the autonomous Kurdish areas of Northern Syria known as Rojava. She was an internationalist member of the Women’s Defense Units, a feminist, all-woman army which had fought against, and helped defeat, Isis in Kobane, Manbij, and Raqqa.

Before arriving in Syria she had been an animal rights, migrant rights and environmental activist. But it was the explicitly feminist nature of the revolution in Rojava that turned Anna from a supporter into an internationalist fighter.

She herself drew the parallel between the Kurdish revolution and the Spanish Revolution of 1936, which also attracted thousands of internationalists.

And I don’t want to get into detail on the Kurdish revolution, because other, better-informed people have written about it in far greater depth than I could hope to.

But I do want to highlight the exemplary, and highly unusual nature of a self-avowed feminist fighting force actively engaging patriarchy in one of its most extreme, weaponized and highly ideological forms.

And I want to highlight the bravery, and passionate conviction of a young internationalist dedicating herself to that struggle in the knowledge that she could quite easily die in the process.

But in all the examples I have given above, even in those that could arguably “just” be about wages and conditions, it seems that the question is never really “how much more can I get”, but about fundamentally changing the world.

About rejecting the system.

About the liberation of all women, sure. But also about a collective dream of a better future. A radical desire to stop living in our separate little boxes and to start working for a worthwhile, just, equal and sustainable future.

It’s not about hammers and sickles. It’s about changing who we are—both women and men—our relation to each other and our place in the world.

“As some friends once wrote, “There is no secret for revolution, no grand dialectic, no master theory. Revolution is simple. Go out and meet folks who are just as passionate as you are— and if they don’t realize it, help them along the way. Combine forces, scheme, and make plans. Then, do it.”

If there’s a symbol for that, then this is it. And these are some of the people living it.