WHEN THE WEST VIRGINIAN TEACHERS ROARED 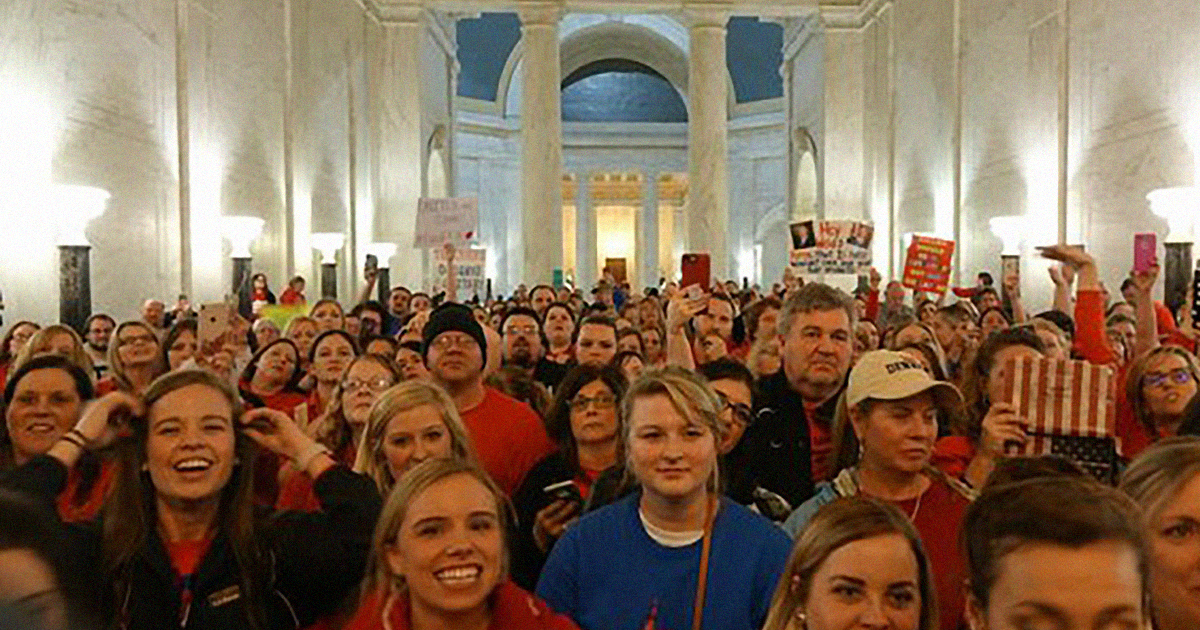 Something remarkable happened in the United States recently.

An estimated 37,000 workers went on wildcat strike and won.

And here’s something worth noting: it was a wildcat strike by a workforce composed largely of women, and led by women.

It was a strike that ignored a law banning strikes, and ignored sectoral boundaries by including other groups of workers.

In case you’re still wondering what I am referring to, it was the strike of the public school teachers in West Virginia, aligned with striking bus drivers and cooks and other school staff.

The immediate upshot of the strike is a 5% pay rise achieved over a nine-day period of action.

But the longer-term takeaway lies in its significance for the women’s movement, the labor movement and the ecological movement.

Coming at a time when the #metoo movement is mobilizing against predatory male violence and abuse of power and the USA has seen the biggest women’s demonstrations in its entire history, the West Virginia strike points towards a newly rediscovered method of addressing issues of structural inequality, namely grassroots-organized labor militancy and direct action.

“I see it as the power of women engaged in collective organizing…I think if you looked at these disproportionately female professions, like teaching, people have basically been exploited for years because they care about kids. … It was women taking a risk, deciding it had been too much.”—Randi Weingarten, president of the American Federation of Teachers, one of the unions involved in the West Virginia strike.

It’s no coincidence that the strike came in West Virginia, not only one of the poorest states in the whole of the USA but also one with a proud history of labor militancy in the coal mining industry.   Many of the striking teachers are direct descendants of generations of militant West Virginia coal miners.

In terms of the labor movement, there is a huge lesson here in terms of direct grassroots democracy, with strike leaders using social media and telephone trees to conduct instant polls of their local and regional workplaces, giving the base direct control of the movement and direction of the strike.

“We had to find a way to allow all school employees to vote on this in a matter of hours. Every school is different, but at my school I used our phone tree and texted or called everyone to see where they stood.” —Jay O’Neal, a middle-school teacher and union activist in Charleston.

The strike itself was a genuinely broad-based movement, made up of unionized and non-unionized workers, spanning a number of different labor organizations and occupational groups, with firm roots and support in their communities. The flexibility of the organizational structure meant that the strikers were able to out-manoeuver the union bureaucracy who were originally prepared to accept an inadequate deal proposed by the employers’ side, headed up by Republican Gov. and billionaire coal heir Jim Justice.

And here’s where things get really interesting for the ecological movement.

The Republicans in the West Virginia Senate originally indicated that any deal involving the teachers’ insurance – PEIA – would have to be paid for by cuts to community-college-tuition assistance and Medicaid.

The teachers rightly rejected this, and countered by raising their own demands – that the additional expenditure should be paid for by taxing the fossil fuel industry in the state.

West Virginia, like the USA as a whole, is politically dominated by the interests of the fossil fuel lobby, who received a massive tax cut in 2006, effectively reducing state revenue by $425 million per year. The subsequent cuts in state education and health care expenditure were a direct result of that tax gift to the fossil fuel corporations in the state.

Whereas the ecology and climate justice movement has been vocal in its demands for climate reparations on the principle of “the polluter pays”, so far there have been few voices raised demanding that the fossil fuel lobby be held responsible for the severe declines in education and public welfare in working class communities.

In effect, it is not only essential that the ecology movement should support striking workers; it should also be adopting this kind of community-oriented reparations into its range of demands.

However, with regard to the teachers’ strike, it has to be said that the demand to tax the oil and coal industry not only did not go down well with the state governor, but also did not make it as part of the final deal.

And it’s the nature of the final deal that has caused a lot of discussion, both within the teachers’ movement and beyond.

Of course a 5% pay raise after a week of manifested solidarity and wildcat striking is a win, however you look at it.

But on the issue of insurance premiums, the teachers agreed with the Governor’s suggestion of a “task force” to look into it the issue, rather than concrete legislative improvements.

Edwina Howard-Jack, a 12th-grade teacher from Buckhannon put it like this:

“I am largely disappointed and feel it was a mistake for us to go back today without a resolution for PEIA… We didn’t ask for a task force…. They want us to trust this government, on a promise. We don’t [know] where the funding is coming for the raises or to fix PEIA or even the specifics of the [task force].”

There is of course absolutely no reason why militant workers should trust a deeply conservative government headed up by a fossil fuel billionaire. Historically, such governments have been more interested in disciplining the workforce (aka revenge) than social justice.

But in terms of the broader picture, the strike wave has left behind not only an incredible sense of strength and optimism, but a role model for future conflicts.

Teachers are already preparing to strike in Oklahoma, where decade-old tax cuts for industry owners have resulted in a 28 percent cut to public education. And of course they have been watching developments in West Virginia closely.

On a recent edition of Democracy Now, Kate Endicott, a high school teacher and union activist in Mingo County, West Virginia, gave this message to her sisters and brothers in Oklahoma:

“One of the things that we learned that was so important was that there will always be people that will tell you the risks, but we in West Virginia can tell you the rewards. And if you can stand in unity, and if you can lock arms with your brothers and sisters and you can take that courageous step out, you will never regret it, because we’ve been saying that one voice produces an echo, but thousands of voices produce a roar.”

And beyond such words of solidarity and encouragement, the general sense remaining among West Virginia teachers is one of gearing up for a greater struggle: