TOO LONG AT THE FAIR 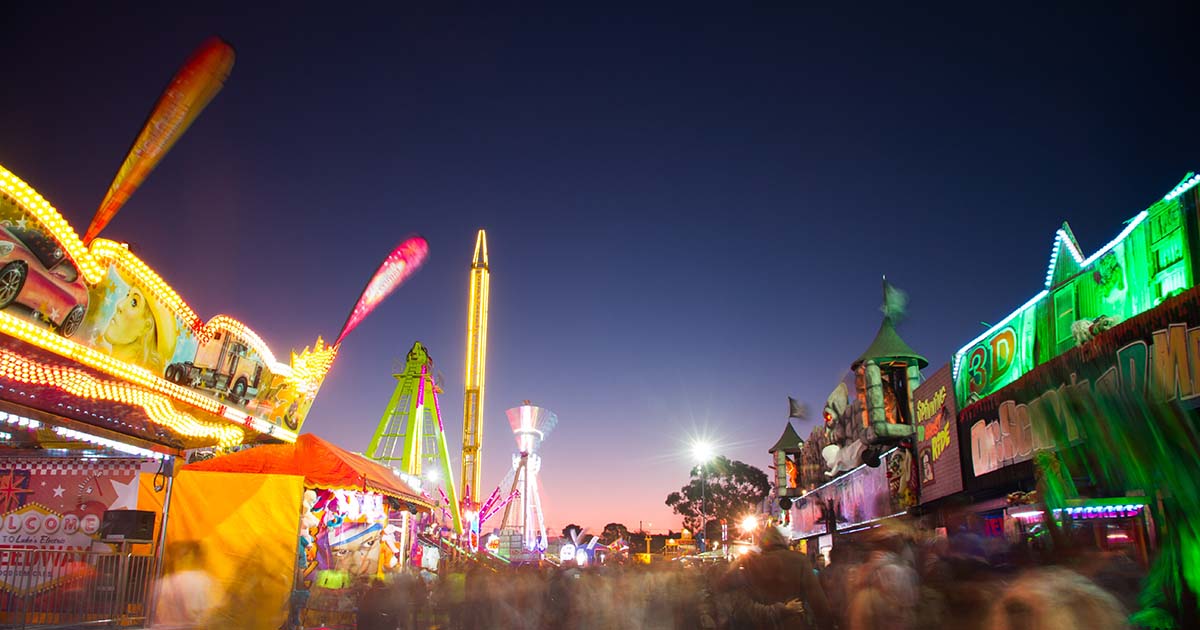 “You know Lilybelle, maybe you really can’t go home again,” Cal said. They were standing in front of a red, white, and blue banner proclaiming OLD GLORY CARNIVAL with phallic rockets shooting out of the “o”s.

“Who said anything about going home? I’m looking forward to this.”

“I’m referring to Thomas Wolfe’s…oh, never mind.” Cal knew he’d sound pompous if he went on about Look Homeward, Angel. He couldn’t blame Lily, or even the Midwest, but Cal considered it an injustice that he and every other English literature major from the late 20th and early 21st century found themselves steeped in references and equipped with a vocabulary that society judged too highfalutin to be trotted out after graduation, except on rare occasions. Then when one of those occasions did arise—say, a milestone birthday or better yet, a memorial service—the apposite expression or quote would have atrophied from disuse and come out misremembered or mispronounced. Cal sometimes wished he lived in the 18th century, when he’d have gotten the chance to shoot off his rhetorical arsenal before it got rusty.

“What I mean is, I’ve been looking forward to the carnival, too,” he said. “Maybe too much. I even had trouble sleeping last night. We’d better brace ourselves for disappointment. It can’t be as good as when we stumbled upon it last summer. Then, we had no expectations; now, we have lots—probably lots too many.”

“Maybe it’ll be even better,” Lily replied. She laid a hand on his shoulder and shepherded him toward the ticket booth.

Her touch felt strange but good. Since Larry’s death, Cal’s physical contact with others was more or less limited to handshakes at business meetings and the occasional shove in a crowd. They paid the $5-a-head admission charge and went inside.

They wandered the fairway until a sign for something called The Chamber of Wonders and Horrors caught Lily’s eye. “What about this? Maybe it’ll be the kind of life-affirming freak show you loved as a kid.”

Cal examined the poster. “I doubt it. The Coney Island show had live performers who exuded carnie joie de vivre; this looks like it’s just photos and exhibits.”

“We’ll never know unless we try.”

“Guess I can’t argue with that.”

Cal felt sheepish waiting to pay the extra two dollars that would initiate them into the “arcain mysteries” promised on the poster, but inside the chamber/double-wide trailer they were delighted to find real-fake sideshow ambiance: dim lights and creepy-looking stuff floating in jars. The Chamber of Wonders and Horrors was stronger on horror than wonder. Since it seemed more appropriate to digest those dubious thrills privately, they split up to spend a few minutes in solitary contemplation of two-headed chickens, mutated fetuses, and other exotica that shouldn’t exist and probably didn’t.

They reunited for the “bonus attraction” set up outside the exit. They’d been hit up for three separate admission charges in their first 10 minutes at the fair, but after a short debate, Lily paid an extra dollar for each of them and they followed a SELENA THE SNAKE GIRL sign that pointed to a curtained doorway. Instead of the chamber/trailer’s dimly lit oddities—out-of-focus ephemera that teased the eye with clouded formaldehyde and warped glass—Lily and Cal found themselves confronted by naked pseudospectacle in a cordoned-off patch of sunlight. No one else was around to buffer their self-consciousness, just the two of them and the supposed snake woman.

She/it stared at them with unblinking carnie aggression, some undoubtedly real, some likely feigned to unnerve visitors so their eyes wouldn’t linger on the plywood and rubber that made up the disappointingly ordinary special effect, which boiled down to a woman sticking her head out of a hole in a box holding the decapitated remains of a 3-foot-long rubber snake. The message in Selena’s glare was unmistakable: What did you expect, asshole—a real snake girl?

Cal’s mood rose along with the nervous laughter he’d suppressed in Selena’s lair. He and Lily spent the next hour-and-a-half eating cotton candy and drinking beer (to his surprise, not a bad combination), tossing balls at precarious-looking but stubbornly steady milk-bottle pyramids, and going on the few rides that fit into the very narrow subset of what she didn’t find lame and he didn’t consider terrifying.

Lily hesitated at the fried-dough counter.

“Don’t even think about fried dough until you go on the teacups with me,” Cal said. “I learned about the horrifying results of combining puke with centrifugal force when I was a kid. I have no nostalgia for reliving that experience.”

“I can’t believe you’re making me go on the damn teacups.” Her pout evoked the tomboy she’d been three decades before. “I haven’t been on that ride since I was, like, five. You know we’re going to be the only grown-ups without kids. People will think we’re molesters.”

“The teacups were my favorite; one of the few rides my mom would go on with me when I was little. You promised.”

“You’re equating the two of us riding the teacups with a mass murderer heading into the execution chamber?” Cal asked. “Aren’t you being a tad overdramatic?”

“What, you’re the only one who’s allowed to be overdramatic?”

Cal glared at her.

“I guess it may be a bit much for our situation, but the quote just popped into my head,” Lily said.

“The things that pop into your head, Lilybelle. Gary Gilmore. Ted Bundy…I’ve never heard anybody mention serial killers as much as you do. What is it with you and those guys?”

“They’re plain fascinating. Maybe some of it has to do with being a social worker: trying to understand how they got to be murderers, what triggered the violence, whether they’re damaged forever.” She smirked at Cal. “And have you ever noticed how many of them are cute? When I see a totally hot guy, either in the newspaper or in real life, I figure he’s either an actor or the Hillside Strangler. And with my luck, you know I’m more likely to run into the Hillside Strangler.”

“This gives me insight into why you became a social worker. Your whole do-gooder thing isn’t altruism, it’s a beard for your quest to find a bad boy who’ll love you.”

As expected, the teacups left Cal exuberant and Lily sullen, though she brightened when he suggested they stop off for a nightcap on the way home.

To reach the exit, Lily and Cal had to thread their way through a tight row of booths. The air smelled of popcorn and burnt peanuts and the blinking lights created a disorienting strobe effect. Although it was late, plenty of attractions—the Guess-Your-Age Sage, the rifle range, the Crucible of Strength—remained open. The county fair was leaving town that night, so the carnies were burning up their reserves in a final display aimed at prying a few more worn dollars from the fun-stupefied residents of Loveland, Ohio.

A squat, vicious-looking youth homed in on Cal. His eyes had a drugged, dangerous glitter.

“Can’t let your woman go home empty handed, can you?” he shouted, gesturing toward some stuffed animals lined up behind him. An array of squashed or elongated faces—a leering piglet, a poodle with heart-shaped red eyes—stared out at Lily and Cal. “All you have to do is aim the water pistol at the clown’s mouth and pop the balloon.”

Three people stood with water guns raised. The combatants were two teenagers who looked as if they were a couple and an older man with a port-wine birthmark that pooled from the corner of his mouth like a cartoon speech-bubble.

Lily and Cal exchanged glances. “No thanks,” he said. The two of them walked off hurriedly.

“What’s the matter?” the barker shouted after them. “Ain’t she worth it?”

After the bartender plunked down their second round of drinks, Lily took an exploratory sip of her bourbon and soda. “Maybe Tom Wolfe was right…you really can’t go home again.”

Cal was equal parts surprised and pleased. “You have hidden depths, my dear.”

“They’re not hidden,” Lily said. “It’s just that nobody bothers looking for them, and I’m too modest to trot them out unsolicited.”

“That’s a shame that must be rectified. I will look for your depths—and celebrate them.”

This is an excerpt from a novel in progress.