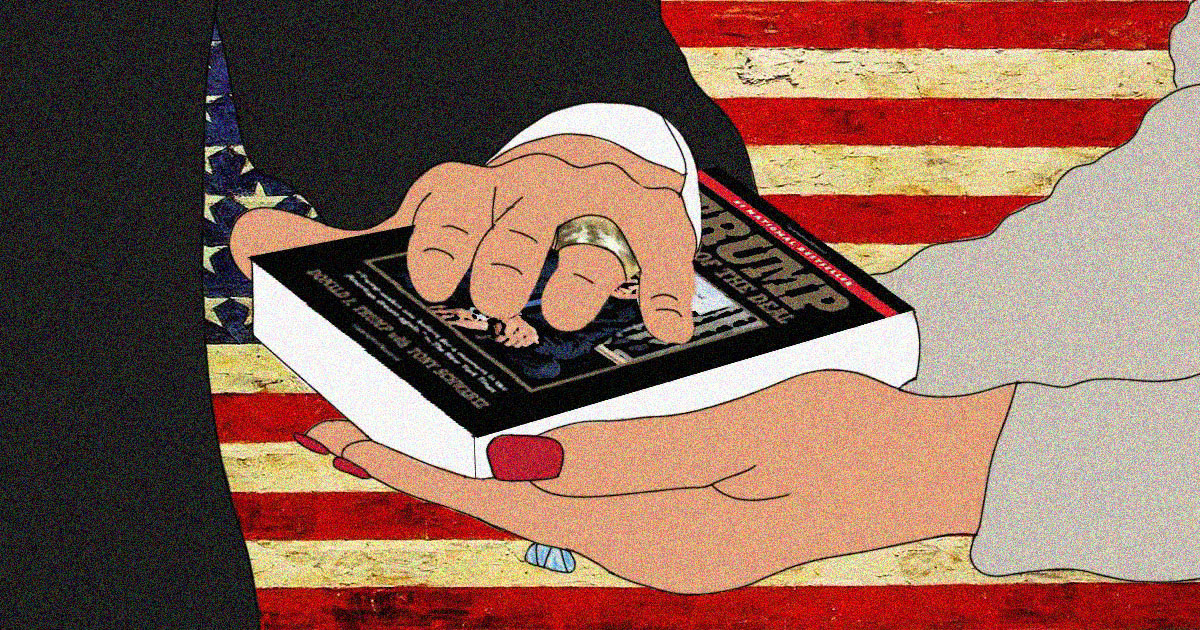 As America braces itself for the possibility of becoming a real-life dystopia, I’ve been immersing myself in fictional ones. And I’ve discovered that books and movies from the recent past—such as The Handmaid’s Tale and Children of Men—bite even deeper as we enter our own perverse multiverse: one in which Donald Trump is president of the United States.

I returned to The Handmaid’s Tale, which was scary enough when it came out in the 1980s, because the times feel right to re-explore the themes of triumphalist misogyny, the obliteration of human rights, and conservatism run amuck. As expected, Canadian author Margaret Atwood’s vision of America feels eerily apropos on the eve of the long and very dark night that Donald Trump’s presidency is likely to turn out to be. (Unless it’s undone at the last moment, or in its earliest days, by Trump’s murky dealings with Putin’s Russia.)

This time around, I was struck by a passage I hadn’t noticed in my first reading, in which Atwood describes the poignancy and peril in the very human tendency to seek out humanity in others, even despots and oppressors. The handmaid of the title, who keeps catching herself searching for sympathetic traits in “the Commander” who controls and rapes her, sees an unsettling similarity between herself and the paramour of a concentration-camp commandant she’d read about when women were still allowed to read (which they aren’t by the time of the novel’s main action):

“He was not a monster, to her. Probably he had some endearing trait: he whistled, off key, in the shower, he had a yen for truffles, he called his dog Liebchen and made it sit up for little pieces of raw steak. How easy it is to invent a humanity, for anyone at all. What an available temptation.”

As Trump’s menacing shadow stretches across the world, many are succumbing to that available temptation, telling themselves things like, “He’s all bark but no bite—once he gets in office, he’ll act ‘presidential.’ Plus he loves his kids, and his need to be admired is so pathetic, it’s kind of endearing.” But as Atwood makes clear in The Handmaid’s Tale, succumbing to the “available temptation” of humanizing evil helps advance that evil.

Something Wicked This Way Comes

What damage may emerge from Trump’s presidency? Well, how much time do you have?

Now that the once-unthinkable reality of Trump’s ascension to power has come to pass, everything from nuclear war to global financial catastrophe seems far more possible. But the disasters that preoccupy me are not global doomsday scenarios, but the more localized damage that undoubtedly will ensue as Trump’s uncoordinated baby hands restlessly tug at America’s frayed social fabric.

Take the issue of race. Trump’s idea of reaching out to black America is posing for awkward photo ops with rapper Kanye West (who showed up at Trump Tower days after a much-publicized nervous breakdown) and boxing promoter Don King (who appears to be bat-shit crazy every day) and occasionally yelling, “What the hell have you got to lose?” Meanwhile, Trump is assembling what may turn out to be an all-white cabinet. (Yes, Ben Carson is in the mix, but it’s hard to see him as a real cabinet member rather than a heft-less novelty, like one of those mesmerizing balloon men you see waving outside car dealerships.)

Carson aside, much of Trump’s inner circle look like pin-ups from a white supremacist calendar. There’s his pick for attorney general: Jefferson Beauregard Sessions III, who allegedly repeatedly addressed a black attorney as “boy” and joked that he only parted ways with the Ku Klux Klan because too many Klansmen are fond of marijuana. (I guess when you’re Jefferson Beauregard Sessions III, lynching and cross-burning may be OK, but lighting up a joint is a bridge too far.) If you have the stomach for it, take a look at Trump’s pick for White House’s chief strategist: corned-beef-faced Steve Bannon, a man who until recently headed the conspiracy-mongering, white-supremacist friendly Breitbart News. As I mentioned in my previous column for The Wild Word, Bannon has cited Dick Cheney, Darth Vader, and Satan as role models. Even Margaret Atwood’s dark imagination couldn’t foresee Steve Bannon.

Women in the Crosshairs

Besides race, another area where Trump’s tiny fingers will rend America’s social fabric involves gender. As you might surmise from my preoccupation with The Handmaid’s Tale, I’m worried that the fragile gains that women have made in recent decades (the source of profound resentment in some quarters) will be rolled back, just as they were in Atwood’s cautionary novel. And in an America (if you count places like Texas as America) where the law stipulates that aborted fetuses must be buried and women seeking to end unwanted pregnancies are forced to watch gory “educational” videos and are probed in medically unnecessary vaginal ultrasound exams, it’s not really a huge leap. Especially when you consider that Trump may have not just one, but a couple, of Supreme Court vacancies to fill. Farewell, Roe v. Wade.

So where’s the fierce opposition from Democratic political leaders? They’re certainly entitled to fiery outrage, especially after Russian hackers sought to undermine their chances in the presidential election—an attempt that actually succeeded, despite the fact that the Democratic candidate won nearly 3 million more popular votes than Trump. Except for notable and heartening exceptions like senators Bernie Sanders and Elizabeth Warren, the Democrats in Congress are mostly a bunch of compromised, ineffectual milquetoasts. Though a few, like senators Chuck Schumer and Cory Booker, are compromised, ineffectual loudmouths.

Booker probably turned in this week’s most egregious performance. First, he broke with the tradition that senators don’t testify against one another in order to protest Jeff Session’s elevation to attorney general. Despite the queasiness I felt over Booker’s plummy rhetoric and hammy delivery, I appreciated the fact that someone was actually taking a strong stand against Sessions. But the very next day, self-canonized St. Cory joined the Republican majority to kill a bill that would help bring in less-expensive drugs from Canada, giving U.S. consumers relief from price-gouging drug companies. The supposed progressive’s vote would be puzzling—if you weren’t aware that he’s someone who’s taken in $267,338 from drug companies in recent years. Booker’s revolting about-face made me want to pop a few pills myself.

Farewell to the Chief

Maybe the most heart-wrenching part of the final days before Trump slimes the White House is the contrast between the farewell address from a president of decency, thoughtfulness, and eloquence and what followed the very next morning: a bullying, ill-informed, crass display from his successor.

Obama took the high road, as he often does (sometimes to my chagrin), so he only mentioned Trump in passing. But it’s clear whom he was talking about when he said, “If every economic issue is framed as a struggle between a hard-working white middle class and an undeserving minority, then workers of all shades will be left fighting for scraps while the wealthy withdraw further into their private enclaves.”

Which sadly, is what I think lies ahead—unless bloody civil unrest, nuclear war, or climatic catastrophe don’t get us first. I know, I know: I’m a hopeless Pollyanna.

During his farewell address, Obama quoted his mother, who used to remind him that “reality has a way of catching up with you.” If that’s true, Trump voters who chose to believe that a swaggering billionaire would listen to the poor working class, not wealthy Wall Street types, will at some stage wake up and realize that their populist champion is packing his administration with wealthy Wall Street types, including four with ties to the much-reviled investment firm Goldman Sachs.

In The Handmaid’s Tale, the protagonist takes comfort in a motto her predecessor had etched into the wardrobe of the room they were both confined in: “Nolite te bastardes carborundorum,” which translates to “Don’t let the bastards grind you down.” As the Orange Excrescence, his creepy Aryan Children of the Damned progeny, and his cabinet of defectives and deplorables pick up the reins of power this week, those sound like words to live by. But in Atwood’s book, the woman who carved that motto hanged herself. So maybe we shouldn’t let ourselves get too giddy.

In his farewell address, Obama reminded us that America was born of the Enlightenment. That observation is consoling, but would be far more comforting if it didn’t seem like our noble experiment in democracy is just days away from reverting to the Dark Ages.