Love must be the antidote to fear 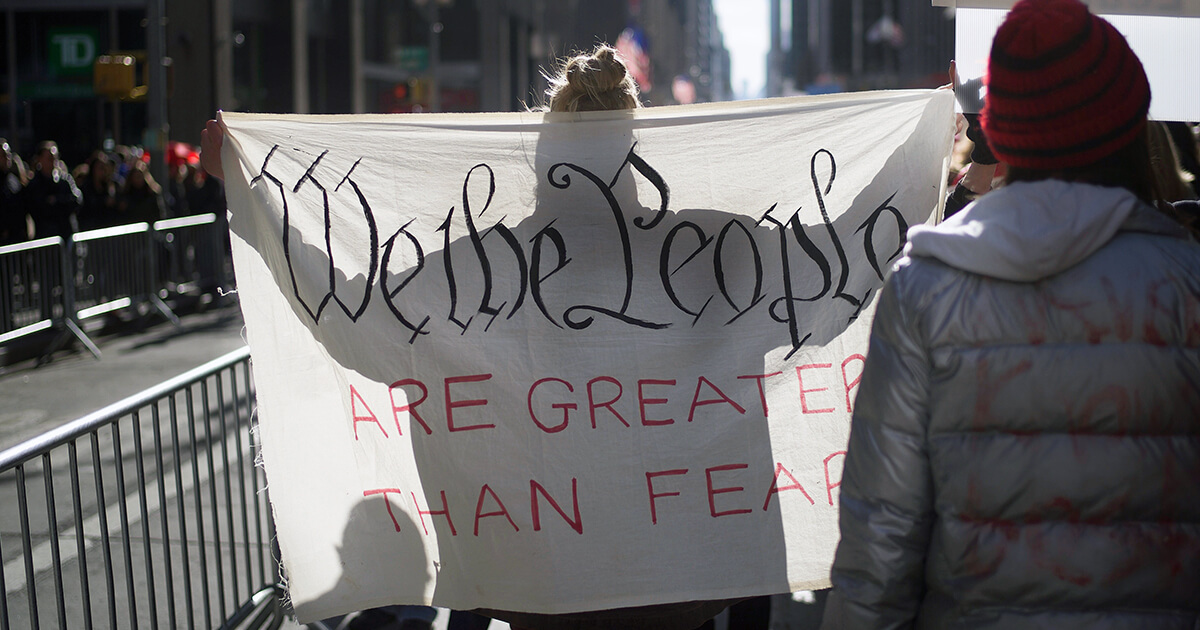 I found out I was pregnant with my second child the week Donald Trump was inaugurated as President. It was also the week I finally decided to read The Handmaid’s Tale (I sometimes make poor life choices).

Like so many people, I spent the weeks leading up to Trump’s presidency overwhelmed by fears I could not fully articulate. Would we find ourselves plunged into an all-encompassing war? Hardly a passing fear as December 2016 saw our president-elect taunting Russia about the size of our nuclear arsenal. How would our environment withstand legislation drafted to benefit the titans of the fossil fuel industry? What would be the fate of same-gender couples who had just won the right to marry? Would immigrant communities find families torn apart as the new administration intensified deportation of those who are undocumented?

To all these fears, yet to be realized, I added fears for a child who would be born into a world of so much uncertainty. What would that world possibly be like for him?

Now, as we draw towards the midterm elections we have been awaiting for 24 long months, that little boy has just passed his first birthday. His personality has manifested itself in ways I could not have imagined when all I knew was that strip of pink on a pregnancy test. He loves to dance. He loves to say BALL loudly and enthusiastically. He screams like a dinosaur whenever processed sugars are denied to him.

Likewise the fears that were mostly amorphous as Donald Trump unexpectedly took office have taken much more concrete forms, in some ways surpassing my deep anxieties: Fears for immigrant families being torn apart through deportation manifested as infants ripped from their parents’ arms and placed in cages. We now hear reports that our planet may have little more than a decade left before we face the destructive outcomes of climate change, and yet our president pushes against regulations that would curb carbon emissions. The transgender students I work with on a daily basis, who are finding their identities being wholly erased by the very government that should be preserving their equal protections.

I sit with these fears often but I find myself most vulnerable to pessimism and anxiety when I am up at night nursing my son and I wonder about the world he and his sister will inherit. I worry about the day my own small, isolated campus may find itself a news headline about yet another mass shooting. Descending into the fog of fear is tempting, and a natural reaction.

But it is in those moments when I remind myself that it is precisely the power of fear that fuels hatred, division, and oppression. Our president and his allies are being subtle in their attempts to drive a wedge of fear between the communities in our country. We are encouraged to fear children born in our country for the claims of citizenship they open to their families. Claims from immigrants and refugees purport to threaten our security and comfortable middle-class existence. Finding the means to provide healthcare for all people would allegedly come at the cost of decreased healthcare access for the rest of us.

The response to fear mongering cannot be more fear. As seductive as fear might be, to give into fear always leaves us descending further into isolation and division. As long as we allow ourselves to be defined by fear, we wind up focused on protecting our own interests rather than finding the capacity to serve one another. Giving into the forces of fear suggests that the world is smaller and uglier than I will allow myself to believe.

I find myself more and more and more often relying on one of my favorite passages of scripture: There is no fear in love, but perfect love casts out fear. Love must be the antidote to fear. The only response to the rising tide of hatred, violence, and uncertainty must be for us all to stand up for one another. We must stand up and say that trans rights are human rights. We must state in no uncertain terms that we will not be afraid of a caravan of migrants coming to our country to seek asylum. Those of us in regions that will be less impacted by climate change must continue to make consumer choices and push changes in corporations and our government to protect those most vulnerable to the rising global temperatures.

I do not know with any more certainty today than I did two years ago what the future will hold for my children. I do know, however, that my hope for them goes far beyond hopes of security and material prosperity. I hope that they grow up to be kind. I hope that they will grow up committed to seeking the best world not just for themselves but for all people. I hope they grow up seeing fear mongering for the lie that it is.

One small thing I can do to ensure such a world for my children is to support candidates and policies that promote the common good over individual self-interest. I do not know what outcome these midterm elections will bring. But I do know that whatever the result may be, I will model for my children an attitude of love over fear. That is the only way we can move forward.