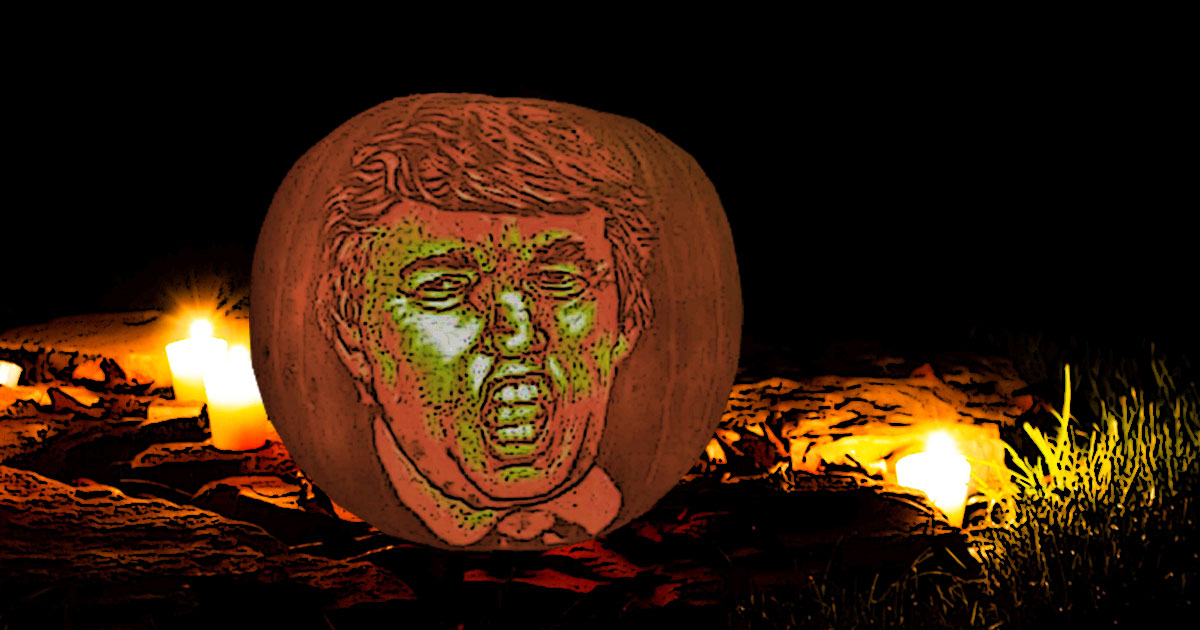 As 2020 slouches fitfully from Halloween to the US presidential election, I think it’s safe to say that there are a bunch of pretty scary scenarios lined up for us. Us being the planet’s inhabitants-at-large, but more specifically those who live in the good old US of A.

Cue the grisly sounds emanating from the White House, along with the mad ghoulish cackle of Il Douchebag himself.

“The fools, the fools!” he is heard to say. “They think they can take the presidency away from me. But it’s mine you hear me, all mine!”

Meanwhile, just about every sentient being on the planet has been subjected to a multi-media force-feeding of the myriad ways in which the Prez intends to steal the election, if the popular vote goes against him.

Ah, sorry, forget that. Not the popular vote. The votes of the arcane and seriously out-of-whack institution known as the electoral college. Rather than relying on something as insubstantial as the will of the people, America’s founding slave-holders, aka fathers, came up with a cute system that gave little, sparsely populated states the same clout as large, densely populated ones. Add into the mix the already heavily gerrymandered voting districts, the exclusion of large sections of the population from the electoral rolls, the partisan packing of the supreme court, the sabotaging of the Postal Service and political bias of the head of the Justice Department, and I think you wouldn’t be far wrong in assuming that the USA is heading towards an electoral clusterfuck of extraordinary proportions.

Never mind that in some areas – that just happen to be predominantly Black, Latinx and/or Democrat – voters have to wait in line for up to seven hours to cast their ballot, prompting the former foreign minister of Australia to refer to the USA as “simply not a democracy, not in the sense western Europe, Australia, New Zealand and Canada are democracies”.

And to add a little spice to the mix, there is the not insignificant issue of serious political violence by non-state actors, to wit, the whole caboodle of white supremacist militias that Trump has been assiduously cultivating and dog-whistling to during the entirety of his presidency. In its incipient phase, the promotion of street-level terror and political violence by irregular forces has come to be one of the hallmark definitions of emerging fascism. After four years in power, Trump is becoming ever more emboldened in his forging of a coalition of Christian extremists, white supremacists, gun nuts and trash-the-planet capitalists. The outline of his project must now be clear to everyone: It is the rollback and abolition of what remains of democracy in the USA, along the lines laid out by his friends and role-models Putin, Erdogan, Duterte. Not bad for a man whose ex-wife claims his favorite bedtime reading was a book of Hitler’s speeches.

Cut to a city not a million miles away, in a time say, 30 days from our own.

The elections have been a farce, plagued by accusations of ballot-rigging and manipulation. Encouraged by foreign countries with dubious motives, the nation’s traditional white ruling elite persuades the military to step in to restore order and crush the street protests that have been an almost daily occurrence since the election took place. In the weeks that follow demonstrators are shot, incarcerated, disappeared and tortured, not only by the police and army, but also by right-wing militias hell-bent on revenge against leftists and anyone else they deem responsible for the nation’s plight. The United Nations Human Rights Committee documents racist massacres by the security forces. The country’s main trade unions declare a general strike that lasts for weeks, leading to a standoff with the military’s interim government, which finds itself under massive popular pressure to reschedule the election. The situation is explosive, close to open civil war. But the protests are supported by a vast majority of the population, who claim the street as their own, and who are refused to be intimidated by the tactics of the oligarchy. In the end the interim government, isolated and divided, and hugely reviled for their inept handling of the Covid epidemic, agree to fresh elections, which are won by pro-strike, pro-democracy candidates in a clear rejection of authoritarianism and dictatorship.

And there are serious lessons to be learned there. First and foremost, the role of popular mobilization and resistance by organized labor in facing up to a coup.

As things come to a head in the run-up to the election, people are seriously starting to see the need for a Plan B.

What is to be done, if Trump refuses to leave, or otherwise attempts to sabotage the electoral process?

Of course, the main thing must be to mobilize, and to take to the streets. But if it is to succeed, such a mobilization must be more than just a one-off protest. To make its point, to really hammer the message home, the protest must also be a work stoppage. It must be a strike. And the strike must be as widespread as possible. It must be a general strike.

And if you’re thinking that a general strike to fend off authoritarian and neo-fascist attacks against the results of the presidential election is a far-fetched and unlikely thing, make no mistake that labor organizations are starting to call for precisely that option.

On October 19th, Western Massachusetts Area Labor Federation passed a resolution calling for a general strike “if Donald Trump and his GOP enablers attempt to obstruct, subvert, sabotage, overturn or reject a fair and complete count of presidential ballots.”[4] According to Area Labor Federation President Jeff Jones, the resolution “aims to get us thinking about how we as a labor movement intend to respond in the case of an attempted coup. The labor movement must be ready to defend our democracy and use our collective power to ensure that every vote is counted.”

Later the same week, the MLK Labor Council, an AFL-CIO regional body of labor groups representing more than 150 unions with more than 100,000 members in the Seattle, Washington, area, passed a resolution calling for a general strike if Trump does not respect the outcome of the November 3 election.

According to resolution co-author Karen Strickland, who is President of the American Federation of Teachers (AFT) Washington, “[Progressive groups] have to come together. It can’t just be labor. Labor needs to take a strong role, but we’re all in this together. Labor has to take a leadership role and use all the institutional power and leverage that we have while also taking leadership from younger people and Black Lives Matter.”

On October 25th, the Executive Board of the VT AFL-CIO, representing 10,000 unionized public and private sector workers across Vermont, decided to call for a “General Strike Authorization Vote” if the losing candidate refuses to commit to a peaceful transfer of power.

Carl Rosen, President of the United Electrical, Radio and Machine Workers of America (UE) was recently quoted as saying, “Unions should be at the front lines in defense of American democracy and should be prepared to take decisive action if our democratic traditions are threatened.”

The Detroit chapter of the American Postal Workers Union is currently distributing the following “pledge” on its website, which is summed up in the four final statements:

Printable copies of the pledge are available here.

Also in Detroit, the Moratorium NOW! Coalition has put out a call for broad-based “People’s Committees to Defend Democratic Rights” with the aim of garnering community support for the general strike.

In addition, organizations such as the We Count On Us youth coalition (encompassing the Sunrise Movement, March For Lives, Dream Defenders and United We Stand) have also already committed to striking to prevent a coup.

So there is movement, and there is increasing willingness at grassroot level to defend the limited democratic gains that have been made in American society. In an essentially leaderless situation, it is left to local organizations to show the way forward, and to demonstrate what is possible.

If Trump’s pronouncements over recent weeks and months are anything to go by, it looks safe to say that he won’t go without a fight. The month after Halloween looks set to be one of the most genuinely scary, dangerous and decisive periods in recent US history. But if the working people of America are willing to join the fray, and to strike in defense of democracy, we could be looking at a whole different ball game.