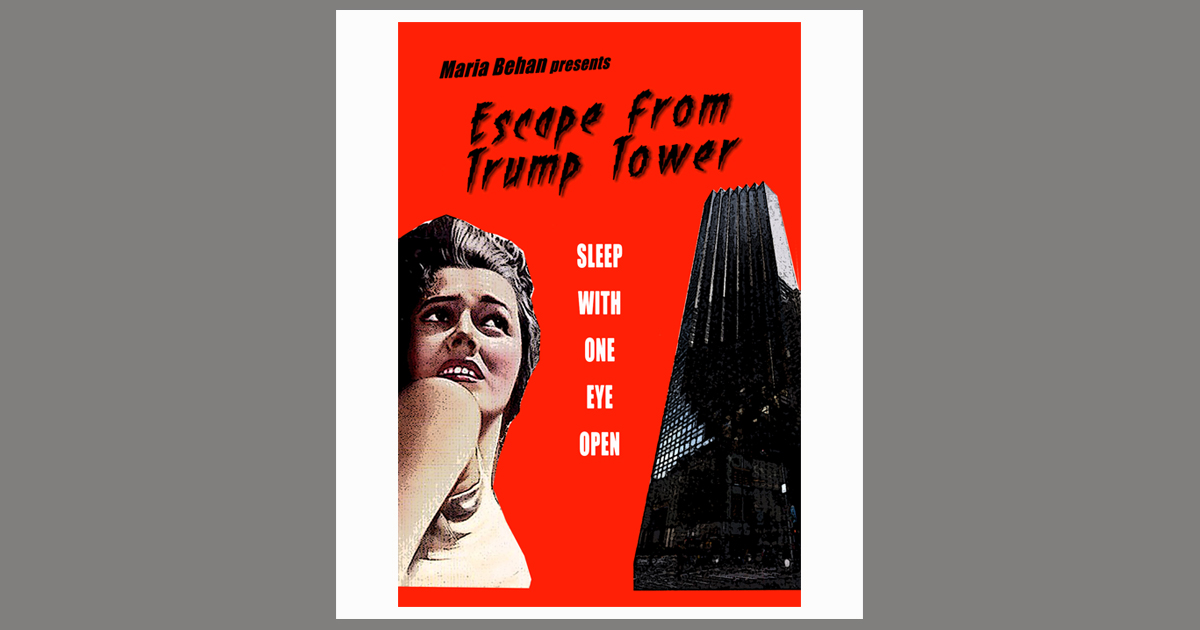 The other morning, I woke from an unsettling dream.

In it, I am trying to escape from Donald Trump, who is holding myself and others in a gilded hellhole that roughly resembles the pictures I’ve seen of the Versailles parody that Trump and his family unironically inhabit when they’re in New York. Like Trump Towers, the absurd golden residence we’re trapped in is surrounded by asphalt, dinginess, and old-time NYC grunge.

My sense is that there’s no escape, but I’m determined to try. Dressed in an inappropriately slinky, spangled gown, I am sweaty and panicked as I throw hastily chosen trinkets into a suitcase. I guess I’m hoping to barter with those items if I make it to the menacing but free world outside the Trump compound.

At one point Donald and his son Barron pause in the doorway and look in inquiringly—and in Donald’s case, suspiciously. I smile and say something banal, trying to insert notes of calm and even fondness into my quavering voice. As Trump père and fils walk off down the hall, I hear Donald say, “It’s almost like she likes me” before erupting into mirthless laughter.

Somehow I get outside in my high heels and now dirtied and fraying slinky dress. The wheels of my suitcase turn reluctantly as they become increasingly gummed up with urban muck. I’m struggling up a steep incline that is somehow both dry for me and filled with water for the sea creatures that live there. A siren sounds and I guess a drain is opened, because the water that is and isn’t there recedes, beaching the moat-dwellers. Two large dolphins flop and squirm on the damp concrete, fixing me with eyes that beseech, then glaze over in death.

Next I’m outside what seems like a circa-1960 electronics store with an array of turned-on televisions set up in a window display. A small crowd is gathered outside, transfixed by what’s on those TVs: Republican leaders Mitch McConnell and Paul Ryan discussing the virtues of impeaching a president vs. removing him by invoking the Constitution’s 25th Amendment.

That’s when I know it’s a dream and wake up in a clammy sweat.

That was the nightmare that woke me this past Saturday morning, but it also strikes me as a damn close evocation of what it feels like to be living in America during Donald Trump‘s end time—which feels like it could be our own. I have often written in this column about dark days in America since Trump took office. But things have shifted in the last week or so, and each day feels not just dark, but like it might be the last. And not just for the president.

Look at what’s happened in just the last couple of days. The U.S. government’s Department of Homeland Security and Computer Emergency Readiness Team (CERT) is issuing warnings to nuclear power facilities that Russian government actors have penetrated their networks—and now may have the power to turn off or sabotage those plants. Trump is gleefully firing anyone with even a semblance of sense or scruple from his cabinet. Those who aren’t being tossed from the sinking USS Trump are fleeing like the rats they are. Even Donald Trump Junior‘s wife is leaving him (it occurs to me that “my” character in my Escape from Trump Tower dream, the woman fleeing in fancy clothes with purloined knickknacks, may be a version of her, because she sure as heck doesn’t sound like me). Most unnerving of all, without a secretary of state or even an ambassador to Korea, Trump is moving, seemingly inexorably, towards a meeting with Kim Jong-un—a rendezvous as sinister sounding and catastrophe courting as Freddy vs. Jason. But 1) that was just a movie and 2) the principals weren’t packing nukes.

Nightmares are generally things we wake up from—unless Freddie Kruger, or worse, Donald Trump is involved. Indeed under Trump, the cycle of nightmare is often reversed: You awaken refreshed, maybe even smiling from an enjoyable dream, only to have your heart sink with the realization that you don’t inhabit that pleasant dreamscape; you live in a reality where Donald Trump is the leader of the free world. Your sunken heart flops weakly in your chest as you reach for your phone to check if Trump fired Special Counsel Robert Muller or if maybe there are missiles flying across the Pacific. (That last worry may sound like hyperbole, but I assure you, it is not—at least not for me. I sometimes envision missiles homing in on my corner of Northern California when I’m fumbling for my phone in the middle of the night. That started after an alert about a North Korean missile making its way eastward across the Pacific flashed on my phone minutes before a jury I was serving on was supposed to be sequestered to begin our deliberations. Frantically searching for news and refreshing my alerts, I mentally prepared a speech telling the judge that while my fellow jurors seemed nice and all, I didn’t want to spend my last moments on Earth with them. A minute before we were called back into the courtroom, clarification came in from The Guardian: it was only a test, and the missile had plunged into the sea off the coast of Japan. Which conjures up images of Godzilla, but give me a damn break, I have enough on my plate.)

I’d say that America and much of the world is developing post-traumatic stress disorder (PTSD), but the trauma isn’t “post”: It’s perpetually building. And with that, I bid you goodnight—though I’d advise you to sleep with one eye open.