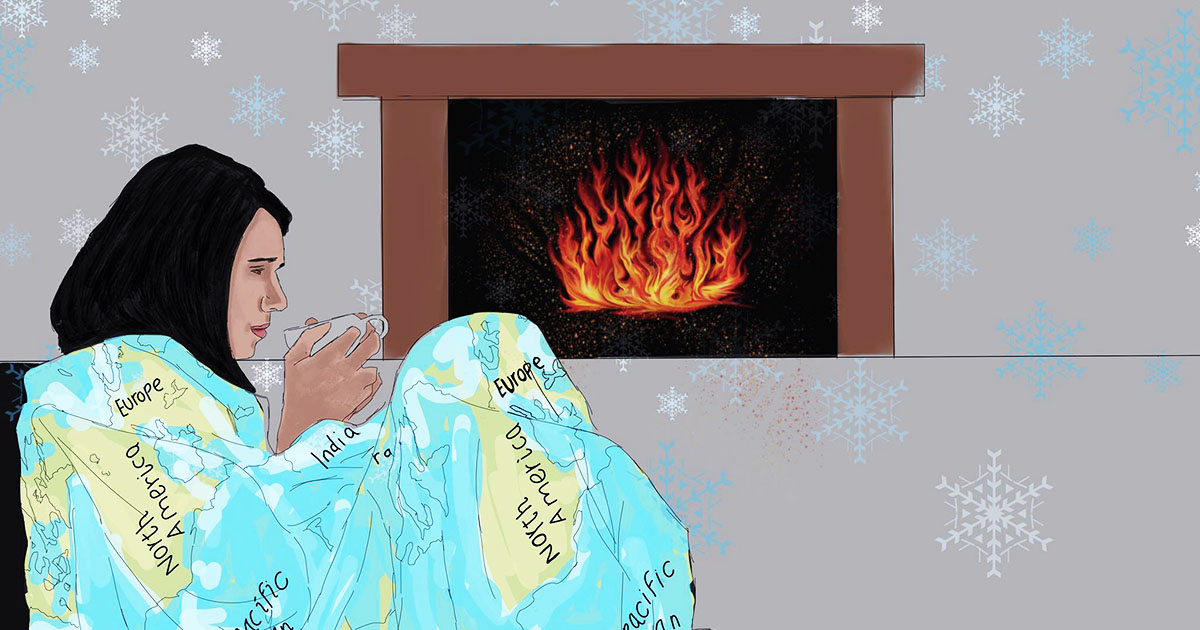 During the winter when cold clung so tightly that time was in constant stasis, I collected countries: Brazil, Germany, Mexico.  I gathered them around me like mothers—hearty Wisconsin women who fed, fussed, and tightened scarves.

Brazil had been first.  I returned as the hard cold set in, and when I was back home, I could feel the whole country leaving me—the gates of Sao Paulo first, then Bonito, then, Cruzeiro do Sul, with its orange soil, churrascos, and red plastic bar tables.  I could still hear the stray dogs of Parana barking occasionally as I fell into sleep, but I woke before they got too close, the radiators clicking me back to reality.

I have spent much of my adult life in love—most often greedy, exhausting love, the opposite of Corinthian love.  But that winter, when I returned from Brazil, I was not in love.  I was in the radioactive aftermath of love.  When I got back to my apartment, now half-empty, my ex-fiancé gone, I clutched the pendant of Nossa Senhora Aparecida, Our Lady of Aparecida, that hung around my neck.  It was over.  I sat in the big window in the living room.  Cold leaked in around the seams.  I shivered.  I drank a little.  I closed my eyes, and I remembered one night on the drive from Parana City back to Cruzeiro do Sul how Luiz Vincente pulled the car over near a sugar cane field so we could look at the stars.  It was warm. There was no light pollution.  I was far enough from my ex-fiancé that we weren’t even looking at the same sky.  I think I had been happy right on the side of that highway.  I think I had forgotten I ever had to go home. I think I had forgotten I would have to work, I would have to empty the garbage, separate the laundry, pay the phone bill. In Parana, I never knew I was hungry until I sat down to eat.  And when I did, there was always enough for me to get my fill.

But now it was over, and I was alone in my apartment in Minneapolis, and I would have to become accustomed to never hearing the door open unless it was by my own hand.  So, I stayed sitting in that window, my listening aimless, and I thought about where I could possibly go next or who I could possibly go to next.

I was born in the winter, which is different than having been conceived in it.  I was punishment for the libidinousness of spring and summer, and perhaps this more than anything has shaped my life.  I belong to winter, and no matter how many places I collect, not one, save the northland, will collect me back.  It is the same with the men I love: March, July, August.  They blow in, blow out, blow off.  I’m too much, I suppose.  And yet I can’t stop my hands from reaching out for them, my hands which are always cold, a symptom of my birth.

A month later, still radioactive, I fell into the arms of another man, a man born of March, while he visited Minneapolis.  We spent each other in the frenzied way you spend the last of your foreign currency: depressed you are about to go home, you find any trinket to buy—a postcard, a keychain, a mug—until you have nothing left.  So it was with him.  Soon he was back in his little room in Germany, my name printed on his various lists of things to do.  But after he had been gone a few weeks, I made the top of his list, and he told me to buy a ticket to Dusseldorf.

Though I had traveled, he had done what I had never managed to, which was leave my home behind permanently.  I admired him for it.  I think I thought I loved him.  I think I thought he could take me away forever, as though if I had him, my life would suddenly feel the way life felt when I moved between countries.  Without him, I was a boat without wind; he was the wind, and I was reckless.  I craved the love of stories—one sided, knocked around, and proud.  My love was neither patient nor kind.  It wanted, and it wanted selfishly.

So I packed my bags as love bade me and I flew across the sea from my winter to his.

When I landed in Düsseldorf, the cold was tolerable, gray and damp, nothing like Minneapolis where the city creaked and groaned, arthritis in its streets.  He kissed me on the platform of a train and handed me a can of lager. We drank while waiting, and I felt younger somehow. He spilled his beer amidst the rush hour crowd.  I laughed as he bumbled.  It seemed I had some power. I forgot once again as I held his arm that I would ever have to go home.  I forgot about the naked spaces on the walls of my apartment, undressed as they had been by my ex-fiancé.

Nights in Germany we exhausted each other through tongue and hip. I slept tucked tightly between him and the wall in his twin-sized bed.  Days, I wandered the streets of Dortmund, his second-rate city, while he taught English at a university.  I smoked rolled cigarettes in the Christmas market and drank Glühwein in the rain.  I ate bread and cheese and drank wine in Westpark. At Dortmunder U, I saw a small white, wooden rowboat on which A BOAT FOR MY DREAMS was painted in black, sans serif font.  I imagined a boat for my dreams, what it would look like, who would be in it, where it would go.  But most importantly, and what I could not reconcile, was exactly how my boat would move, what force could possibly propel it forward.

Then, on a Sunday morning, neither of us well-slept, he kissed me at the airport in Düsseldorf.  He told me we would see each other again.  I asked him to meet me in Dublin.  He smiled.  Then he waved at me through the glass that separated those who stay from those who leave. I boarded an airplane.  I fell asleep, and when I woke, my hand was pushing the door to my apartment shut behind me.

A few weeks later, he told me he had found another lover, a woman who lived in Spain.  I sat in my window.  I shivered.  I drank a little.  I smoked cigarettes until my clothes smelled.  At night I cried as I imagined how he and that woman had surely enjoyed each other in multiple countries—their time together already surpassing ours.  I wrote stories of 30 words or less.  They shot out of the gun of my mind, unrepentant.  I made mad plans: I was going to quit my job, live on a houseboat, drive across the Rocky Mountains.  There was so much to be done.  I no longer had time to concentrate on the season that continued to oppress me, nor did I have time to think of those men I had loved so passionately there had been no chance of requite.

Finally, I settled on going to another country.  This time my jewel glowed green and red and inside it was an eagle with a serpent in its mouth: I was going to Mexico. I had no lover there, nor any real reason for going except it was something to do.  It was a place to go to get away from other places—their presence an irritant that rubbed the most tender parts of my skin, that reminded me of all I had lost in the past year.

In Mexico, I thought of Germany, I thought of my ex-lover, for movement itself reminded me of him.  How I wished to see his steady gate on the cracked sidewalks of Zona Rosa! How I longed to push my arm against his as the music of the city played around us!  How I longed to make love to him somewhere blatant and conspicuous as I watched lovers wrap their brazos around each other, breathless in their depths of their besos.  I stared at the handsome men, their darkness, the heat which leaked from them. I drank mescal and kissed a man with an Indian face.  I climbed the Pyramid of the Sun.  I sat in cafes and drank coffee and ate fruit and pan dulce.  I pretended this was my home, this eternal smoggy summer. I pretended my life was in my back pack, my wealth in a metal machine with unending zeroes on its screen.  I bought trinkets.  I learned new palabras and swore by La Virgen I would become fluent in Spanish.  I swore I would return.  I swore I was having fun.  I swore I no longer cared about love or winter.

Then I boarded an airplane, and when I woke up, I was back in Minneapolis, where winter was persisting past the first day of spring.  I sat in my window.  I shivered. I drank a little.  I tried to think of nothing. But thoughts have a way of flattening themselves, of slipping beneath doors and through cracks.  And I could not help but think of La Gruta do Lago Azul and the Avenue of the Dead, of the empty nails where pictures once hung in my apartment, of falling asleep between Köln and Dortmund, my lover’s head on my shoulder.  I had traveled on three continents, and mainly what I felt was lonely.  But as I sat in my window this time, I did not make any plans, for winter had to be ending.  The snow and ice would melt and soon, certainly it had to be soon, I would catch sight of a patch of brown or green—rare earth—and at least for that moment, I would be full of sound and reverence. 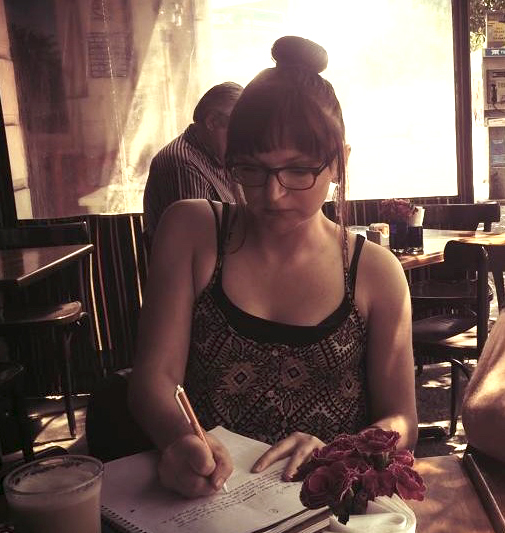 Darci Schummer is the author of the story collection Six Months in the Midwest (Unsolicited Press, 2014) and co-author of the collection Hinge (broadcraft press, 2015). Her work has appeared in Midwestern Gothic, Revolver magazine, Paper Darts, and Conclave: A Journal of Character, among other places. She teaches writing at Fond du Lac Tribal and Community College and splits her time between Duluth and Minneapolis, Minnesota. www.darcischummer.com.