CONGRESS OF THE LIVING DEAD 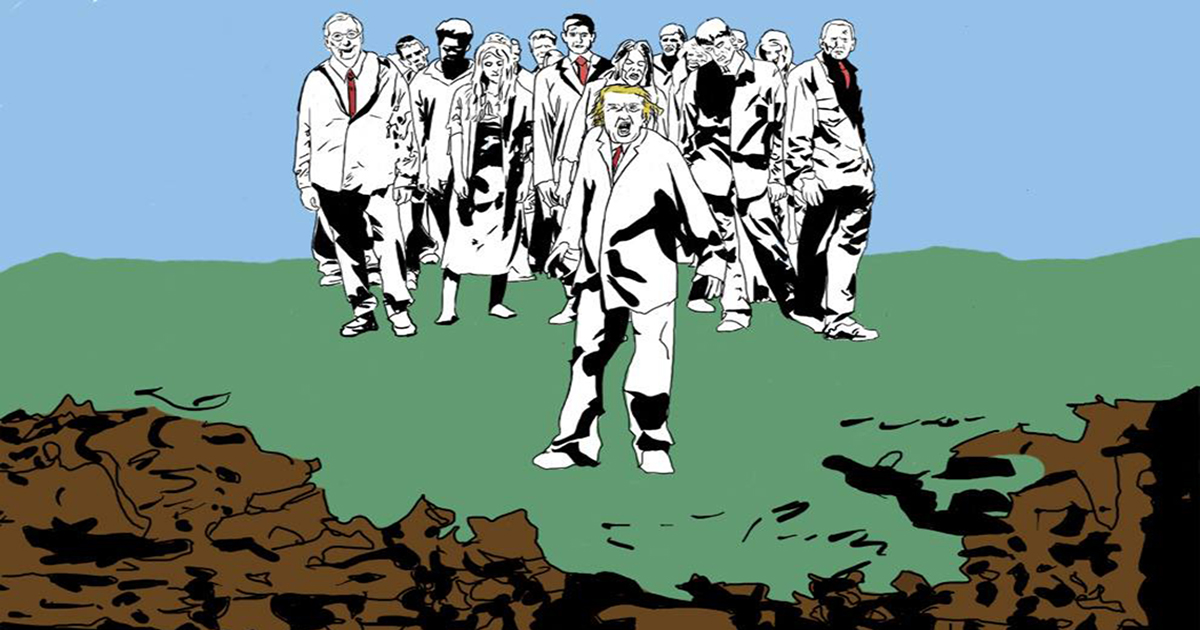 The Republican Party is a lurching, stumbling zombie. Sure, it’s still alive, in a manner of speaking. Indeed, it controls the most powerful office in the world—the U.S. presidency—as well as both chambers of Congress.

But can “control” and the current president even be used in the same sentence? And are you truly alive if you can’t muster more than pursed lips or a stifled murmur of disapproval as the literal madman in the White House brags about his big nuclear button and trashes entire continents as “shitholes”?

Those are just Trump’s words. Far more damaging are his actions—from gutting environmental regulations and terrorizing immigrant communities to undermining Americans’ healthcare and accelerating the dizzying rate at which our nation’s financial spigots siphon off economic gains to those who are already very rich.

Donald Trump is mentally impaired, racist, and an enemy to America’s democratic institutions. And the political party that doesn’t stand against him—that actually enables him—is a dead thing shambling toward the cliff of the 2018 elections.

Thankfully, the virus, space dust, or whatever evil has turned Congressional Republicans (with the notable exception of Senator Jeff Flake) into doomed and soulless zombies has only infected a minority of the nation’s citizenry.

And when the uninfected citizenry streams to our polling stations in what I anticipate will be unprecedented numbers (if we manage to escape nuclear Armageddon until November), our torches will be lit and our pikes will be sharp. And they’ll be aimed squarely at the monstrous Republicans who have abetted the pretty much literal anti-Christ defiling the White House.

The zombie metaphor goes only so far in the current political context. For instance, zombies eat others, while the Republican Party appears to be eating itself. Which makes one wonder how it manages to keep itself down—what with all that stomach-churning vitriol and those pointy flag pins to digest. Not to mention enough hypocrisy and Bibles to clog the gut of a boa constrictor.

Congressional Republicans are disgusting, but hardly surprising. After all, they’re sticking with the pattern established when they opted to fall in line behind Trump in the first place. That line ends in hell—but alas, they’re not getting there fast enough.

Don’t Let the Sideshow Distract You from the Shitshow

As is always the case with a flamboyant huckster like Trump, there’s a carnival aspect to his antics. And sometimes, it’s infectious. For instance, I was struck by the childlike glee with which some TV pundits enunciated the word “shithole” after Trump used the term discussing immigration policies with a Senate delegation. Looking pretty equally incensed and delighted with himself, CNN’s Anderson Cooper observed that if the president of the United States can say the word, TV commentators may as well go to town themselves.

But those diverting scenes should not hide the fact that Trump’s coarse language reflects a repulsive racism—racism that has profound consequences both for U.S. policy and for individual lives. Think of the roughly 800,000 people brought into the country as children by their parents who may be deported if DACA protections are not extended under an immigration-reform deal—which was what was being negotiated before Trump blew everything up with his racist inanities about shitholes and the desirability of Norwegian immigrants. In the aftermath, Trump says DACA is “probably dead.”

Or consider the nearly 200,000 Salvadorans, including many who have been in the country for a couple of decades, who may soon be forced back to a drought- and crime-ridden homeland they barely know. Trump loves frightening people with the specter of MS-13, a gang known for its brutality and willingness to menace, enlist, and kill even the very young. Where does MS-13 come from? El Salvador. Yet if Trump has his way, Salvadorans who fled to the U.S., often under horrifying conditions (remember the streams of desperate unaccompanied children taking their chances on the top of train cars?), will be sent back into the clutches of MS-13.

Michael Wolff’s Fire and Fury is a gripping and lurid account of the Trump sideshow—penned by a pretty adept huckster himself. But most of the “news” in the book isn’t new to those who’ve been paying attention. Of course the president is corrupt, compromised, narcissistic, stupid (or demented, I don’t want to be unkind), malevolent, fat, follicle-challenged and somehow, despite all that…vain. Tell us something we don’t know, Mr. Wolff.

I’d respect the book more if the journalistic standards had been higher and if it weren’t so error ridden. Indeed, Fire and Fury contains the typo I’ve been petrified of perpetrating ever since I first started writing for publication: confusing the word “public” with “pubic.” Wolff’s book describes Steve Bannon’s “pubic venom.” Though come to think of it, considering the man and the administration he served, maybe it’s not a typo.

Speaking of “public,” The New Yorker piece entitled “The Lost Emperor” nailed it: Trump is the thoroughly daft, gold- and ego-obsessed Emperor Nero of the current age. The Roman Senate eventually ousted their Nero, branding him a “public enemy.” Despicably and potentially ruinously, Republicans in the U.S. Senate show no willingness to acknowledge, much less oppose, our own. Instead, they allow America’s public enemy to despoil our country, its institutions, and the entire world order. Even the Pope says he’s scared…and the Pope doesn’t scare easily. Here’s hoping we can manage to hang on until the coming elections, when the United States will have an opportunity to start rebuilding after the Republican zombie apocalypse.