Climate Strike or “Turn to Sabotage”? 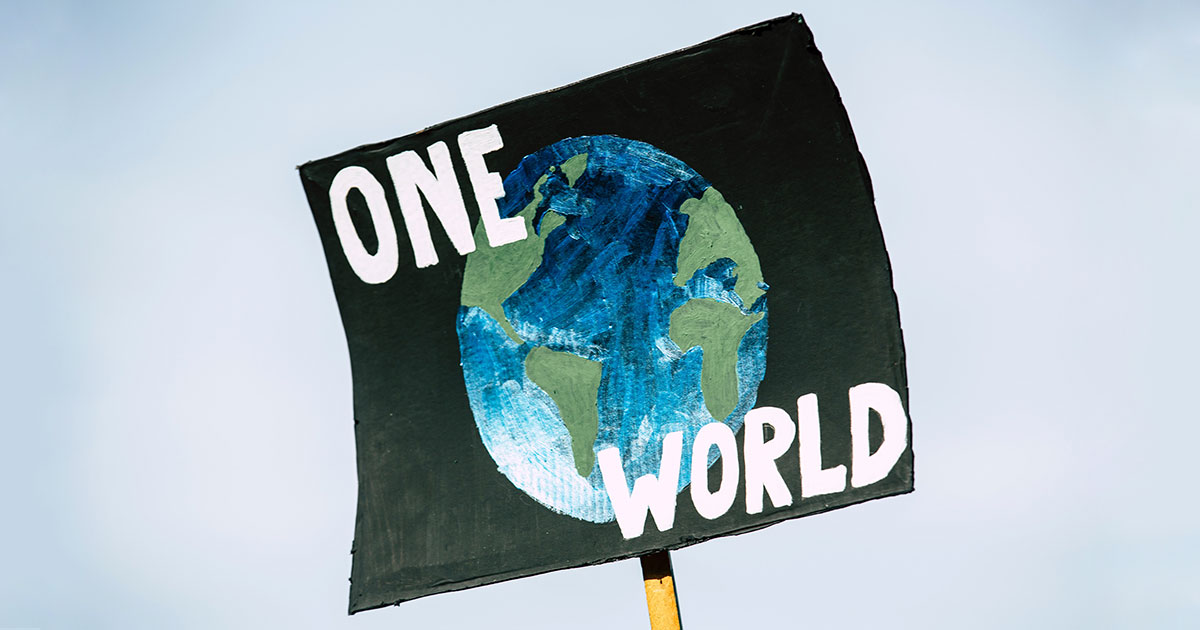 Two days before the German elections, 100,000 people demonstrate in Berlin in response to a call by the youth-led organisation Fridays For Future (FFF). For Germany as a whole, the figure is around 600,000 people. Strikes and demonstrations take place at hundreds of different locations around the world, making this one of the biggest actions for climate justice since the first youth strike wave of 2019.

Among those participating in the German capital, school students are in the overwhelming majority. Yet there are also plenty of demonstrators from older generations – people who have taken the day or maybe just a few hours off work, called in sick or persuaded their workmates to come along to the demonstration. There is also significant participation by striking health care workers, with explicit calls to join the demo by their union (ver.di, the united service workers’ union) and the campaign to expropriate corporate landlords DWEnteignen.

Preparation for the strike among school students has clearly been good, in contrast to the noticeable lack of poster coverage and online agitation among the population at large. All the more surprising then the resonance the call for climate strike seems to have had.

Of course, 100,000 falls far short of the quarter of a million people on the streets of Berlin in 2019, but in that case it has to be said that that action was accompanied by months of preparation, with debates about the merits of demonstrating versus actual strike action being carried out not just in youth and student organisations, but in workers’ organisations around the world.

This time round, the mobilisation comes after a year and a half of corona-related political stasis, during which it was mainly the anti-vaccination and conspiracy-theory right who were out on the streets. Now, Germany is facing a wave of strikes unprecedented in recent decades, along with increasing desperation within the climate movement at the lack of real change in dealing with the  climate crisis.

And of course the timing of the demonstration was key. The huge level of participation has sent a powerful message to the established political parties that the climate movement is alive and kicking, and that the demand for effective emergency action is as urgent as ever in the run-up to November’s COP26 meeting in Glasgow, UK.

It’s also worth comparing the mobilising effect of FFF’s global strike call with Extinction Rebellion’s nationwide “August Rise Up” actions. Although there was some nationwide coverage of a couple of high-visibility actions (including scaling and occupying the Brandenburg Gate), the number of people mobilised was around a couple of thousand, and it has to be said that most of the week’s actions went largely unnoticed by the population at large.

How is it that a call by one section of the climate justice movement can bring almost three-quarters of a million people onto the streets of Germany, whilst a similar call from a different grouping can only mobilise a tiny fraction of those numbers?

One undeniable aspect is of course the emotional pull and political symbolism of striking children, school pupils and students protesting against the imminent and growing threat to their future livelihoods. This really is a powerful factor in popular consciousness at the moment and it’s great to see a re-invigorated youth climate strike movement back on the streets.

There is however, another factor at play. Rightly or wrongly, I think the main difference in the response to the two actions is that is the FFF call is perceived as something to do, an open model of action, and a mode of self-activity, whereas XR’s actions are seen as something more closed, for the initiated, i.e. something you have to join. And even though both protests were pitched as coalition actions, the breadth of social actors in the FFF demo was way broader than XR’s.

I ought to say here that as a former member of XR I have the greatest respect for anyone willing to risk arrest or take part in any form of civil disobedience in the name of climate justice, and I am not trying to disparage individual forms of protest. I’m just trying to make the point that it is mass-based mobilisation that forms the more effective pole of attraction and strategic option for the climate justice movement as a whole at the present time.

Here in Germany, there is also a third player in the extra-parliamentary climate movement mix, i.e. Ende Gelände (EG), an explicitly anti-capitalist formation who have undertaken some spectacular actions over recent years, and whose main focus is on stopping the expansion of the open-cast brown coal/lignite mines that continue to pose an existential threat to towns, villages and forests in the mining areas in south-eastern and western Germany. (Search for “Lüzerath” or “ZADRheinland” for updates on ongoing struggles.) EG have successfully occupied giant diggers and other infrastructure, and have forged alliances with local groups and forest defenders in the affected regions. Their actions have been undertaken with great personal sacrifice and bravery, yet remain geographically specific – the idea being to take activists to the frontline sites of major environmental destruction, and to conduct acts of resistance in the places most threatened by Germany’s insatiable coal industry.

A presumably unintentional side-effect of this three-fold organisational thrust, i.e. school-student organising, high-visibility civil disobedience and coal-field occupations and resistance, has been to leave adult populations in the cities curiously under-mobilised. While it is relatively easy for anyone to join an FFF protest, there are currently no political organisations – to my knowledge – explicitly agitating for the same kind of strike action among the adult working population as among the youth. Perhaps the assumption is that it’s easier for school students to strike than for adults, and of course, that is an issue that can’t be ignored. But nevertheless, if young people are sufficiently worried about their future that they are willing to go on strike, why is this not an issue for the rest of us?

I think, to put it bluntly, that this is an ideological failing of the environmental left to see the struggle for environmental justice as being fundamentally related to the struggle for self-activity and autonomous action of the working class and the oppressed in highly industrialised countries such as Germany. There is a lot of talk of “system change” and of the need for an alternative to the current capitalist economy, yet how such changes are to come about remains vague. Even the self-avowedly anti-capitalist EG is not agitating for strike action among urban workers, nor does it have any systematic orientation towards them.

In recent months, the perceived failure of groups such as XR to reach a wider audience has led to heightened discussion of a so-called “turn to sabotage” within the environmental movement. As the climate crisis worsens, the logic of this “turn” calls for ever-more radical, ever-more “heroic” actions by the available pool of committed activists, rather than attempting to forge broader alliances and involve more of the general population in the movement. Early August saw the leader of the German chapter of XR publicly debating the pros and cons of “peaceful sabotage” “after the election”, and at the time of writing a group of young climate activists have been on hunger strike in front of the German parliament for over 20 days.

In some ways the turn-to-sabotage discussion is an acknowledgement of the relative success of EG in the coalfield context. The idea of blocking the infrastructure of the fossil fuel economy has a long and respected tradition within the climate movement, stretching back to Judi Bari of EarthFirst!/IWW and  the more recent Valve Turners in the States. At the same time however, it is also an expression of desperation and frustration at the relative lack of success of XR’s increasingly individualized “civil disobedience” model.

In fact, it is also strongly reminiscent of the ideological debates in the student movement at the end of the 1960s upsurge, when the working populations in countries such as Germany and the USA were declared “lost to the revolution” and sections of the movement made a turn towards ultra-radical forms of resistance.

The danger inherent in such a turn is that it widens the gap between the self-styled radicals and the general population, rather than narrowing it, at the same time as inviting massively increased levels of state repression.

In other countries, such as France, Italy, and to a certain extent the UK, the late Sixties saw student radicals linking their struggles with those of the working class, leading to new forms of autonomy, wildcat strikes, factory occupations and even general strikes.

And it is certainly a planet-wide general climate strike that I think we should be pushing for now.

At this critical juncture in history, at this “code red for humanity” moment, I think that anything which increases our ability to mobilize, our organisational capacity, our ability to debate and put forward demands and our own sense of agency is a good thing. We should be inviting striking youth into the workplace, and making connections with them whatever way we can. We need to be building alliances and coordinating struggles wherever possible, rather than retreating into ever-more radical forms of individual resistance. And for most of us, the pressure of the capitalist economy means that we are not able to go on leave for weeks at a time to join protests in distant parts of the country without losing our livelihoods. So collective resistance also needs to be grounded in the places we live and work, and with the ways that we live and work.

Don’t get me wrong: resistance and community organising in the ecological sacrifice zones of the capitalist economy is important, valid, meaningful and absolutely necessary. It’s just that most of us live in the cities, with an obligation to work just in order to survive. Radical ecological politics needs to engage with the reality of the working population not just as occasional calls to action, but as grassroots organizing, everyday agitation, formulating demands and arguing for action. We need to make the point that the struggle to survive in a capitalist economy and the struggle for survival on a liveable planet are deeply interconnected, and that strike action is a fundamental form of collective self-defence in the face of such a massive, systemic threat to us all.

Even just a decade ago, a planet-wide general strike would have seemed like an impossibility. Now, after the global climate strikes of recent years and the likelihood that COP26 will fail, it seems like our best bet. Yet a strike of such magnitude is not something you can just call. It has to built, argued for, prepared and organized. And it needs to have the explicit support of significant parts of the international labour movement.

Right now the fate of the Earth is being determined by forces that put profit, and so-called business as usual, above the lives of all living beings, including ourselves. The situation is desperate, and getting worse by the minute. A planet-wide general strike is our way – our only way –  of collectively stopping the capitalist death machine from within.

Save the Earth! Build the strike!