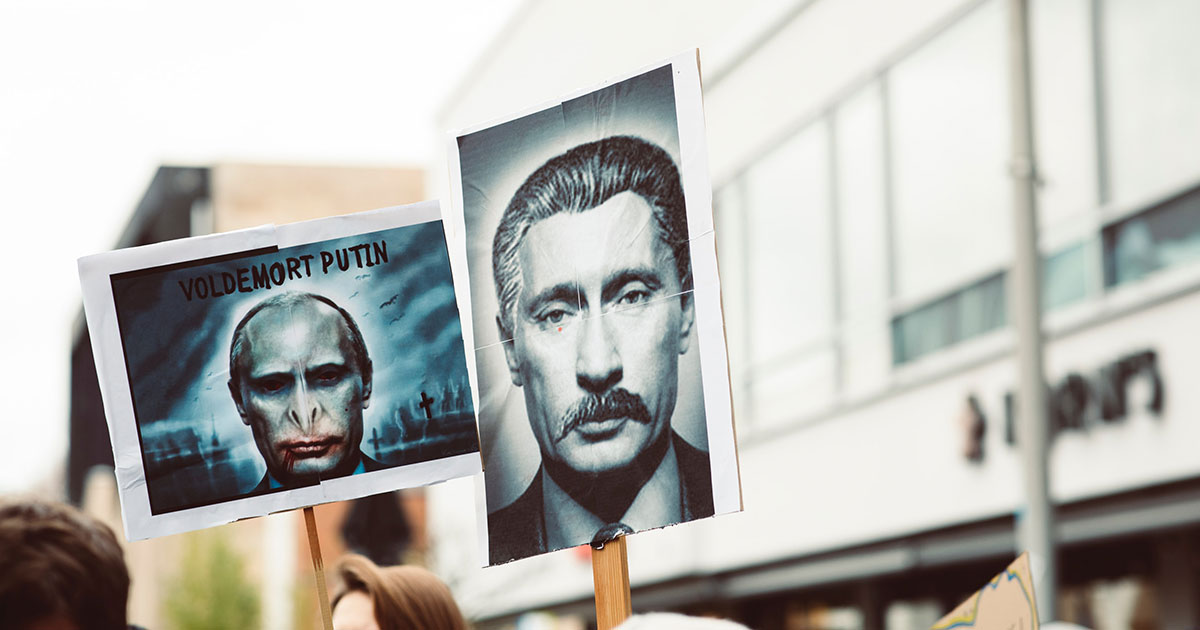 With nearly 200,000 of his troops menacing Ukraine’s border last week, Russian President Vladimir Putin likened Ukraine to Sleeping Beauty, casting himself in the role of her rapist: “Whether you like it or not my beauty, you will need to put up with all I do to you.” Putin’s comment clearly references the fairy tale, though some think it’s taken from the Soviet-era punk song, “Sleeping Beauty in a Coffin.” Either way, it’s creepy as hell, but the latter sounds right. It seems in character that a ghoul like Putin would require necrophiliac fantasies to stiffen Little Vlad the Impaler.

Ukrainian President Volodymyr Zelensky’s response to the grotesque threat was simple and brave, like most of his responses to the current crisis: “Ukraine is indeed a beauty, but she’s not yours.” In light of the Russian invasion of Ukraine that started on February 24, my hope is that she has vagina dentata.

When trying to seem sage about the megalomaniac leaders blighting the 21st century (in locales as far-flung as North Korea, Hungary, Brazil, the Philippines, and Trump’s America), pundits often cite the “madman theory” of foreign policy, which boils down to canny leaders feigning irrationality to keep their adversaries guessing. For most of his career, KGB-cool Putin didn’t fit that description, but in recent months, he seems to be embracing that model. Or more likely (and far worse), his statements and actions imply that he’s actually tipped over into madness.

Can you conceive of anything more frightening than a man with the demeanor of a Bond villain—who happens to be the world’s richest kleptocrat packing its biggest nuclear arsenal—going off the rails? Rational leaders might reconsider their actions in the face of economic suffering and widespread disapproval at home, and fierce military and political resistance abroad. But Putin seems able to shut all that out. Maybe he’s thinking about Sleeping Beauty in a coffin. Or maybe the glory he thinks he’s bringing to his motherland.

Putin’s psychological issues seem to go beyond garden-variety necrophilia or paranoia…he’s got a full-on messiah complex. That Slavic savior mentality seems to have been cultivated by a dodgy Russian Orthodox monk (shades of Rasputin, anyone?) called Father Tikhon Shevkunov. Purportedly Putin’s confessor (imagine that job!), the not-so-good father is said to be egging Putin on to restore the Russia Empire to its former greatness—and former territories.

Unsurprisingly, Putin’s white-savior shtick has found gasping fan boys among the worst elements of the right around the globe. At an America First Political Action Committee event featuring notorious Congresswoman (and Tonya Harding impersonator) Marjorie Taylor Greene, the assembled white nationalists gleefully chanted “Putin, Putin, Putin!” after chortling about how great it is to be a white male. Subtle, eh?

The attraction between fans of Putin and Trump isn’t just (white) skin deep, it goes to the foundation of their conservative beliefs: a return to a real or imagined past. The Americans pine for the antebellum South, the Russians yearn for the heyday of the empire. Those days ain’t coming back…but try telling them that.

Vladimir Sorokin put it eloquently (and perhaps a bit optimistically) in a Guardian opinion piece: “[Putin is] the one who’s doomed because the world of freedom and democracy is far bigger than his dark and gloomy lair. Doomed because what he wants is a new Middle Ages, corruption, lies, and trampling on human freedoms. Because he is the past.”

I’ll say it again: try telling him that. But some are brave enough and desperate enough to proclaim that unwelcome message. Like so many, I’ve been moved by the sight of intrepid Russian protestors and the formidable resistance of the Ukrainians, including their president, Zelensky. During his country’s existential crisis, he has grown into a magnificent leader.

These times are about as dark as any I’ve lived through in my six decades on the planet, but there is also something uplifting going on. After years of feeling like cynicism and hopelessness may be the rational response to the times we find ourselves in, it’s stirring to be reminded of the courage, idealism, and solidarity that live in some human hearts. And maybe seeing that can awaken stirrings in our own.

Putin may blow up the world order—or indeed, the world. But if he doesn’t, there’s a chance that the chaos and pain he has caused may be the catalyst for a brighter future. Seeing the dangers of petrostate hegemony may lead us to finally turn a long-avoided corner. The U.S. progressive group Indivisible put it this way: “We cannot continue to allow the fight against global fascism to be constrained by our dependence on gas and oil.”

Figuring that out won’t just help us defeat fossil-fueled fascists, but also climate catastrophe. As environmentalist Bill McKibben said of green energy, “The best reason to deploy it immediately is to ward off the existential crisis that is climate change, and the second best is to stop the killing of nine million people annually who die from breathing in the particulates that fossil fuel combustion produces. But the third best reason–and perhaps the most plausible for rousing our leaders to action–is that it dramatically reduces the power of autocrats, dictators, and thugs.”

It’s abundantly clear that the world needs to unite to curtail Vladimir Putin’s fantasies about being a messiah, a rapist, or whatever that botoxed lunatic sees when he looks in a mirror. And if standing against Putin’s outrages in Ukraine finally makes global leaders take decisive action to protect our planet and all the life on it, then at least something good will come out of it. But my heart aches for Ukraine, and all of us, as we wait to see how things unfold.

Watching news reports, I’ve been struck by how often defiant Ukrainian civilians drop the f-bomb. As a New Yorker, they’re speaking my language. So I’ll close by adding my voice to the chorus we’ve been hearing from soldiers, shopkeepers, grandfathers, mothers, and students. Fuck off to hell, Putin. You’ve done enough harm in this world.