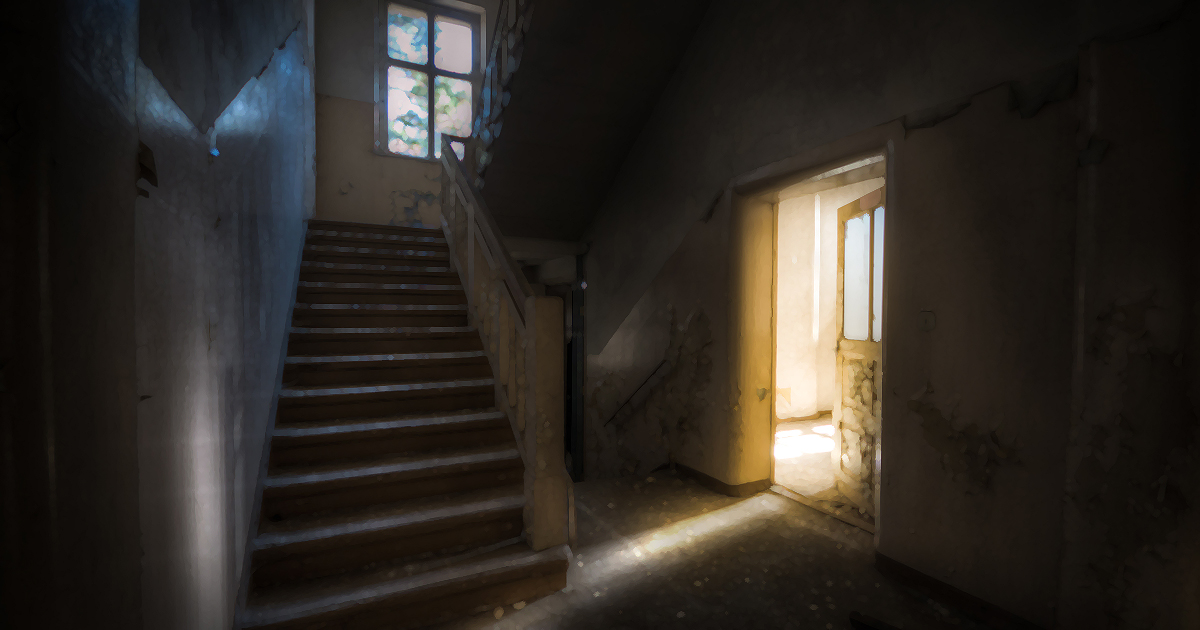 Someone once told me they thought my mother’s spirit watched over me. It was meant to be comforting, I think, but I can’t imagine anything more horrifying. The idea of it haunted me; I had dreams for years that the ghost of my mother was outside my door but couldn’t communicate. It baffled me that someone would think this could be a positive situation.

Imagine—being trapped in a liminal state between life and death, watching the lives of those you love as they endure tragedy, but you’re completely impotent and unable to help. And what happens when they die? Do you move on, or are you still stuck, maybe watching generations of their children live and die, your connection to them more and more tenuous? Or, what if they had no descendants? Eventually, even if they did have descendants, you wouldn’t speak the same language as them. You wouldn’t understand their social customs. Everything that was familiar to you would change. That can happen, anyway, if you live long enough. Are you trapped in your old house, or following them around? Because that house surely wouldn’t exist for very long, a couple hundred years, tops, probably a lot less. Could you move with them if they moved? And what if there were multiple kids; would you have to pick one? Or, would you end up stuck in the house as it became whatever was built to replace it? What if you’re stuck haunting a Porta-Potty  or the bottom of a lake, your descendants long gone?

If you weren’t tied to a place and could “move on” after whoever you were watching died, that would mean you’d end up in a place with, potentially, everyone who’d ever lived. Let’s call this heaven, though the religion itself doesn’t matter. There is a system of rules governing who could get in for most, if not all, religions, and how could we possibly say which is right? Just because we were taught one? That’s like saying “English” is right because that’s the first language I learned. For example, there’s an Egyptian myth that says that when you die, your heart would be weighed against a feather. If your heart weighed more, you went to “hell,” which sounds really poetic but means heaven would be full of psychopaths. For Christians, the rules are just as arbitrary. There are plenty of things that were considered sinful that aren’t now, like being left-handed or eating shellfish. So, potentially, heaven—or whatever you want to call an afterlife—would either be full of horrible people who got in on technicalities, or missing wonderful people who didn’t get in based on technicalities. But maybe faith is all that really matters. I have to say, some of the absolute worst people I’ve ever met were regular churchgoers. Will they go to heaven? Seems likely. Or, maybe no one would get in because all the religions are/were right, and you’d have to make it through all the various damnable offenses. Sorry, Grampa, you didn’t die in battle. Guess you don’t make it into Valhalla.

Maybe that’s why ghosts exist, because the afterlife is too much of a drag. It’s starting to sound a lot like the DMV.

When I think of ghosts, I don’t think of bedsheet-wearing apparitions, tied to the place where they were murdered, or what have you. If murder or unfinished business made ghosts, we’d be knee-deep in them. How often is a person finished with life when they die? And they wouldn’t be able to keep bedsheets on the shelves.

When I was a kid, some of my friends believed my house was haunted. Full disclosure: these folks tended to smoke a lot of pot. No one had died in my house, which one would think is the main prerequisite for a haunting. But maybe not. Maybe what they perceived as a ghost was more of a vibe, an emotional charge that stuck to the walls. Or, maybe it was mice.

But I think this is a lot closer to what a ghost might be. When people live in a place, maybe they shape the place in ways that aren’t obvious. Maybe what we perceive as ghosts are just echoes of those lives, those feelings, bouncing between the walls. But of course, I don’t really know. Some people would say that’s the truly scary thing about ghosts—that we don’t really know about the afterlife. I don’t think that’s it. I think the truly scary thing—and the reason we came up with all this confusing and sometimes contradictory stuff about ghosts and the afterlife—is the idea that this is it and there’s nothing afterward. We give the darkness a name because all the time that we should be savoring and enjoying but spend doing our dumb jobs, or standing in line at the haunted DMV, or just mired in our own bullshit, that’s time we’ll never get back. It’s terrifying. And the Porta-Potty ghosts. They’re pretty scary, too.