Falling snow dampens the hubbub of ski resort guests as Jack trudges back to his room after a kitchen shift, leftovers in his pocket, the forest at his side. He could’ve taken a route away from the dark trees, but this way is solitary, where he can imagine walking with her. He can only remember his mum from grainy, fuzzy photos.

A tanned version in a floppy hat and beach smock strolls with him, snowfall settling on their shoulders. She asks in a nondescript voice if he likes working at the resort. He shrugs.

Something emerges from the trees, and his mum dissipates. It’s a horse. Its coat is dark teak, and a white fleck circles one eye. Jack has heard about brumbies roaming the park. He finds some green beans in his leftovers tub and offers them. The horse touches its mouth to Jack’s palm and eats.

Jack was lifted off the ground, his legs short. The sun warmed him. He was in his mum’s arms. She spoke something encouraging, her voice birthing relentless comfort. They were by a fence that lined a field peppered with paper daisies. A grey horse trotted over. His mum held him tighter when he wriggled. Her face was sharp with freckles, creases, and dark eyebrows, nothing like the vapid versions he’d dreamed about. This was really her. She tipped a tiny white cube into his chubby palm. Pulling his fingers flat, she pushed his hand out to the horse. Jack felt hot breath and snaffling lips.

The sensation in his hand stops, his feet are on the ground, and snow dots his face again. The green beans are gone, and the teak horse snorts before returning to the forest.

A few nights later, Jack sees the dark horse again in the same place. He takes the lid off a fruit salad. ‘You like strawberries?’ He holds it out to the horse and strokes its muzzle.

The same mum who’d assisted him with the sugar lump looked concerned as she helped him get peas on his fork at the kitchen table, his father watching. She asked his father not to do something that Jack didn’t understand, but his father shook his head.

She started to cry, and his father left the room. Jack hugged her, but she kept crying.

The brumby comes back regularly. Sometimes Jack doesn’t have food, but the horse lets Jack stroke it and remember his mum picking flowers, chasing a goanna out of the yard, or colouring pictures with him. Beautiful memories he’d forgotten. Some memories keep him awake at night. His mum sobbing as she washed dishes, letting the phone ring as she lay on the sofa.

Jack meets his father in the resort restaurant. They watch bright skiers hurtle down the slopes, fading away. Jack knows his father wants him to work in science, too; the Ecology Professor has high standards. They don’t order starters or desserts, and stick to weather and the footy.

‘The snow’s melting,’ his father says, stroking his silver moustache. ‘I’ll be back soon for the horse cull. I’ve been supervising the research on it.’

‘The brumbies aren’t native here. There are over fourteen thousand horses in this park. We need to reduce their population to preserve native flora.’ His father says all this as he taps his card to the waiter’s machine, returns it to his wallet, and hands the waiter twenty dollars.

‘Don’t you feel sad about it?’ Jack asks.

‘Feelings have nothing to do with it. I headed my first cull when you were little. Thousands of kangaroos were disposed of. Your mum was upset. She couldn’t see the practicalities of it.’

‘You’re an ecofascist bastard.’ Jack leaves the restaurant and goes to the forest. He searches until he finds his horse and puts his arms around its neck.

He remembers his aunt letting him eat sherbet lemons from her bag. It was a day to remember his mum, so he was allowed sweets, even in the church. The party was full of grownups dressed in black, hugging around pictures of his mum. He found Auntie’s bag in the spare room, next to a pile of his mum’s dresses. He pulled a green one over his head. It smelled of her perfume and hairspray. His father came in, closed the door, and spoke into his phone. Jack kept still. Auntie had said yes to sweets, but his father might not.

‘I’m coming back to work. Look, she decided to bloody hang herself and blame me for it. I’ve got to get on with my life. Jack has school.’

Jack stayed under the dress, wondering what ‘hang herself’ meant.

He steps back from the horse, shivering, not wanting to remember anymore. He just wants to be with her.

The newsreader sits in a well-lit studio opposite Jack’s father in his suit. She says to the camera, ‘The wild horses are travelling out of the national park. This unnatural migration is well-timed for the animals, as thousands of them were due to be culled in the upcoming weeks due to the damage they’ve caused to indigenous flora. Professor of Ecology, David Taylor and chief advisor on the cull has some theories on the unusual migration.’ She turns to him.

The professor strokes his silver moustache. ‘There could be several factors, such as diminishing food sources, or perhaps they’ve sensed further climate change.’

The newsreader smiles. ‘Perhaps they sensed the imminent cull. And you must be pleased that the cull has been cancelled. I’m sure having to arrange the death of thousands of horses isn’t appealing.’

The professor watches the footage behind him of the enormous herd snaking through open shrubland. At the front is a dark brown horse. Beneath its eye is a white fleck. Next to it is a foal, its sinewy legs managing to keep up with its mother. 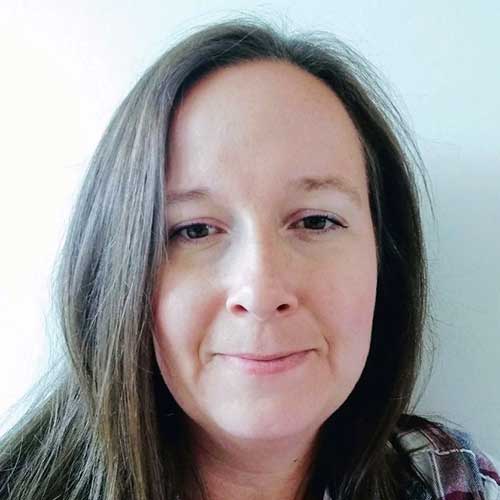 Rebecca Klassen is an editor from The Cotswolds. Her short stories have been published in several magazines and anthologies, including Superlative, The Phare, and Popshot. She has won the London Independent Story Prize for flash fiction, and has performed her work at the Cheltenham Literature Festival, and Stroud Book Festival. Rebecca one day hopes to return to Australia to show her children what an inspiring place it is, and see the sun unmasked by British cloud.