It was a match made in the classroom. He, Sebastian, the youthful professor with graying temples; she, Angeline, the dewy-eyed graduate student. He had published a book and walked with an air of mild renown; she, mildly submissive, but tart. He, vital and mature; she, in the ascent of spring-flushed womanhood.

They rode their bikes, and on a downhill sweep, her front wheel struck a stone. The bike wobbled, and she stretched her legs to hold balance. As she executed her stabilizing maneuver, she kicked him in the leg and he fell, slamming his head against a concrete curb.

At the hospital, they placed him in a bed and told her he had suffered a concussion. As he slept, she placed round slices of white potatoes between his fingers to pull any poison from him and into them. The nurse, with a look of disfavor, placed rubber gloves on her hand and removed the potatoes to the box labeled toxic waste. Angeline peeled an apple, cutting in a circle around it, keeping the skin in one piece. She placed this, like a headband, across his forehead, the ends dangling past his ears. The nurse, removing it, told her, “We do not practice that kind of medicine here.”

When she returned the next morning, Angeline was not allowed in Sebastian’s room. She was told he had unfortunately developed signs of pneumonia. He needed rest.

That night, Angeline brought a cedar log that had been scarred by a lightning bolt to the center of a clearing behind her home. At sunset, she brought fire to it. Throughout the long night, she tended the flames, kept their energy focused on the fierce consummation of the log. She walked in a circle within the smoke, its spice-like bitterness startling within her nose, its vapor seeping deep into her skin.

When sunrise came and the log-fire waned exhausted, she placed a ladleful of ashes into a silver cup and carried it to the kitchen. A pot of water boiled, and she made a paste mixing her urine with the ashes. She poured the mixture into the boiling water and added two tablespoons of honey for flavor. She stirred this mixture with an aspen branch, thirty times clockwise and thirty times counter-clockwise.

When she arrived at the hospital, she lifted Sebastian’s sleepy head from the pillow and fed him the soup one small sip at a time.

Later that day, she searched the woods for a banyan leaf. She pricked her finger with a darning needle and guided one drop of her blood into the cup of the leaf. She put the leaf on a plate and set it on the window ledge for sun.

Upon arriving at the hospital the next morning, she found that Sebastian had begun to recover, and a woman sat in the chair next to his bed.

Although she attempted to conceal it, both Sebastian and Maria saw the spirit of anger emerge within Angeline’s eyes.

She walked to Maria and shook her hand. She placed her other hand on Maria’s shoulder and said, “I am pleased that Sebastian is recovering.”

When she removed her hand from Maria’s shoulder, one strand of Maria’s yellow hair clung to Angeline’s fingers.

At the table of her kitchen, Angeline made a small doll from dried straw. She wrapped the strand of Maria’s hair carefully around the doll’s neck and tied the ends into the double knot of the West Star. She lifted the darning needle and pushed the needle into the breast of the doll.

At that moment, Maria felt a sharp discomfort in her chest, and she fell into a chair.

Angeline eased the needle from the doll, taking care to feel the withdrawal as one might feel the deliciousness of love.

Maria clutched the sides of the chair, fighting for breath, and in her efforts could manage only shallow, unsatisfactory inhales.

The next morning, Angeline lifted the banyan leaf from the dish, and carried it with her to Sebastian’s room. She went to his side and put the leaf into his open hand.

She held his wrist with one hand, and gently, yet with the firmness of the moon, she closed his fingers around the leaf, encasing it in a precious container made of his flesh. Angeline held him in this embrace and closed her eyes. The second hand on the clock halted its pulse. The nurse entered the room, but unexpectedly she remembered paperwork at her desk.

For a sacred, timeless instant, Sebastian’s skin drank from the leaf, deep and eager.

At the proper moment, Angeline opened her eyes; the clock clicked to the next second; the nurse looked up from her desk as from a dream, and Angeline spoke to Sebastian.

“You will love me forever,” she said. 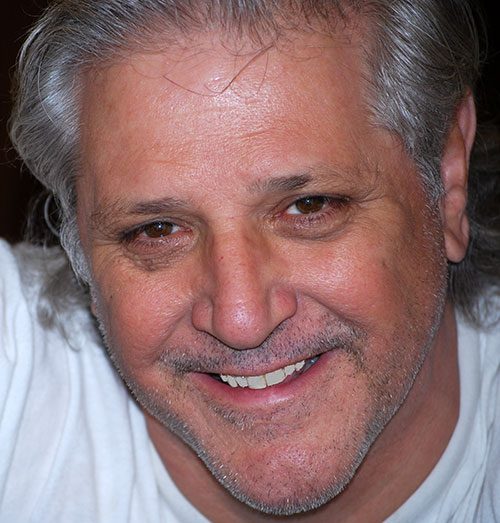 Thom Brucie’s books include the novels, Obsidian Mirth, Weapons of Cain, and Children of Slate; a book of short stories, Still Waters: Five Stories; and two chapbooks of poems: Moments Around the Campfire with A Vietnam Vet and Apprentice Lessons. He has been nominated twice for the Pushcart Prize, and his short stories and poems have appeared in a variety of journals including The San Joaquin Review, Cappers, The Southwestern Review, Pacific Review, Wilderness House Literary Review, North Atlantic Review, and many others. Dr. Brucie is Professor of English and Professional Writing at South Georgia State College. You can check out more about Thom Brucie here: www.ThomBrucie.com