TIME FOR AMERICA TO DEPOSE A SECOND MAD KING 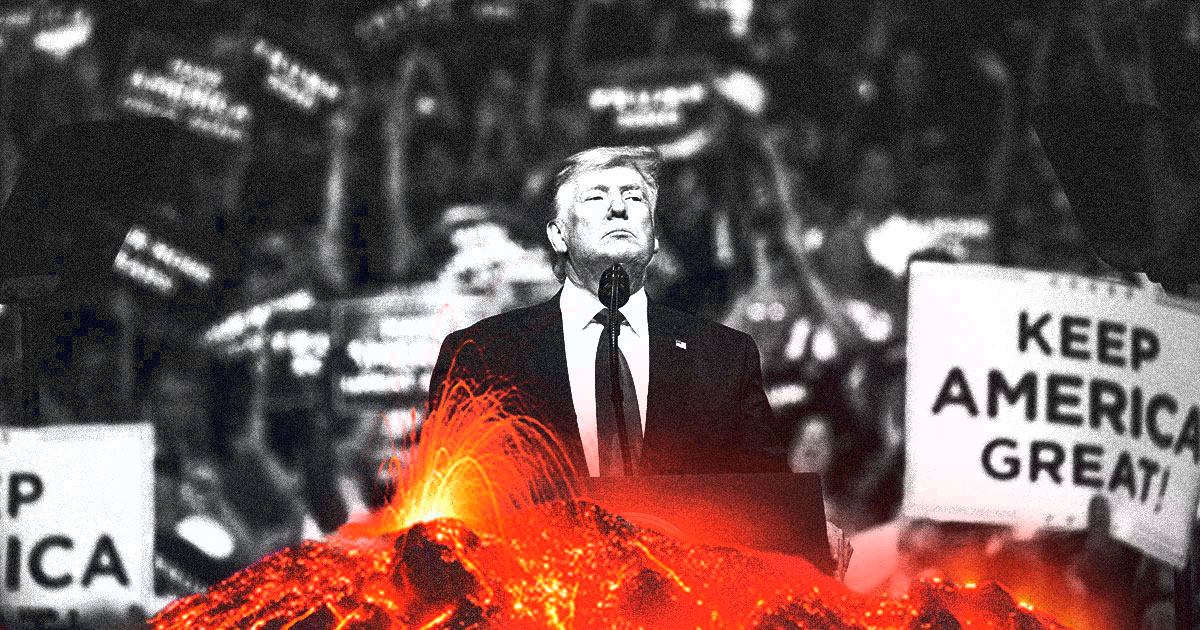 The American experiment began with an 18th-century revolt against a mentally ill despot. A few centuries later, the United States must rise up to rid itself of another one.

President Donald Trump is far more dangerous for his country and the world than King George III was back in the day. For starters, the weapons Britain’s Mad King George had access to were mostly muskets and bayonets, and his mental illness hadn’t reached its apex at the time of the American Revolution. But Donald Trump has his stubby finger on the button that can unleash thermonuclear weapons—and his pathology is erupting volcanically under the pressure of impeachment.

And with the damning testimony of career diplomats like Bill Taylor and Fiona Hill, that pressure has begun to squeeze with the force of tectonic plates. It’s become nearly impossible to deny that Trump held up Congressionally approved aid to an ally, Ukraine, to try to get dirt on his political opponents. And of course, Ukraine isn’t just any U.S. ally, it’s one whose interests are diametrically opposed to those of the man who helped Trump get into office: Vladimir Putin.

The craven recklessness of the Trump administration is also on full display in Syria, where Trump, seemingly taking orders from a different strongman, Turkey’s Recep Erdoğan, sold out another ally, the Kurds, so their territory could be carved up by Erdoğan and the ubiquitous Putin. Perversely, around the time that Trump tweeted that he was pulling U.S. troops out of Syria to leave the Kurds to their fate, we learned that America would be sending in troops to support Saudi Arabia’s ruling authoritarian regime.

So much for the argument that Trump is trying to end the cycle of America’s endless wars. Far from it: He’s just moving U.S. soldiers where his foreign overlords tell him to. What leverage do Putin, Erdoğan, and Saudi butcher Mohammad bin Salman have over Trump that lets them control him like a puppet?

The jaw-dropping nature of Trump’s foreign-policy outrages is making even the supine Republicans in Congress reluctantly realize that their protoplasmic spinelessness is showing. Mitt Romney, Mitch McConnell, and Lindsey Graham aren’t exactly taking a principled stand, but at least the occasional moue of disapproval flickers across their otherwise blank visages. Even televangelist Pat Robertson recently observed that “the president of the United States is in great danger of losing the mandate of heaven if he permits [the abandonment of the Kurds] to happen.”

Imagine that: a hate-mongering, porn-star bribing crook like Trump losing the “mandate of heaven.”

It feels like something is finally shifting when people crazy enough to talk about “the mandate of heaven” are still sane enough to see that Trump is a clear and present danger.

Every day that Donald Trump remains in the White House is a day that American taxpayers are funding a corrupt psychopath’s ceaseless efforts to undo our democratic institutions, chip away at environmental and healthcare protections, betray our allies, and destabilize the world order. All while enriching his family, the foreign fiends who are running him like a prostitute, and the venal dopes who aren’t smart enough to abandon his administration. It has to stop. Now.

Trump likes to label any attempt to subject him to the rule of law as “treason.” But Congress shouldn’t be afraid of that word. Instead, any legislator with a shred of patriotism should embrace the credo Revolutionary War hero Patrick Henry declared back in 1765, “If this be treason, make the most of it.”