Our OUR BODIES issue Artist-in-Residence is the visual artist Julia Kirby.

I feel an intense disconnect with my own body. I struggle to understand where this leaves me in relation to both myself and others. The body is a curious thing. It is a part of who we are—every human being has one—yet I still find that I am unable to comprehend the relationship that I have with my own body. I don’t actually feel like it is a part of me anymore. Any sense of control or connection that I once had with my body was taken away, and I am now left with merely a container of flesh for my organs that I can’t quite relate to.

I wonder though if I ever even had a feeling of connection to begin with. When I think about bodies now, I am primarily bombarded by my own internal defense mechanisms telling me that a body is something that other people will use their own bodies to take advantage of and violate. My internal voices tell me that a violated body is something that should be viewed with shame and disgust, it no longer has any real value or worth. Yes, worthlessness may be the most accurate terminology. A worthless, outer shell that will never be able to regain its purity or figurative cleanliness. Our bodies are objects whose value is dependent on how virtuous and pure they are. At least, this is the concept that was forced upon me from the time of my youth, and seems nearly impossible to eradicate from my inner psyche.

This objectification of the body, this sense of a loss of self-worth that comes after a blemish has been placed on the once pure body by another, is the result of a combination of guilt, shame, and censorship surrounding the subject of our bodies that was ever-present in my upbringing. I was raised in an extremely conservative religious home and community. Within this religion, there is a huge emphasis on the importance of our bodies being pure and virtuous. Women especially are instructed that the most important virtue to strive for is sexual purity. A body that is sexually pure and virtuous is a body that has value and worth. We are not only to cover our bodies, but also to avoid anything in our dress and appearance that would suggest or imply impurity. In a pamphlet that is used as a guideline and teaching tool for youth in the church, specifications for the young women (but not for the young men) are laid out concerning modesty: Immodest clothing is any clothing that is tight, sheer, or revealing in any other manner. Young women should avoid short shorts and short skirts, shirts that do not cover the stomach, and clothing that does not cover the shoulders or is low-cut in the front or the back. Young men should also maintain modesty in their appearance.

So women are being told explicitly throughout their lives to be ashamed and to cover their bodies, including their shoulders and knees, but the young men are simply told to be modest and nothing more. Women that dress immodestly are viewed as sinners because apparently wearing a tight dress sends the message that you are not virtuous. Even just having impure thoughts is looked upon as sinful, and is an implication of being impure and therefore lacking in virtue. If a woman is dressed immodestly she is told that this will cause impure thoughts and desires in a man, as though it is the woman’s responsibility to never put the man in a position where they could be confronted with temptation. The men are not being held accountable for any of their actions, all of the blame and negativity towards sexuality is placed on women. Women are also taught that no man would ever want them if they have had something in their life that left them with a stained, damaged, impure body. Despite the fact that men can come back from their transgressions and not be looked upon as a disgrace, the stain of sin from sexual impurity marks a woman as being unworthy and invaluable for the remainder of her life. Her body has been ruined; no amount of repentance or healing can ever truly remove that scar.

My body is one of the ruined ones. The only difference is, it was not my own choices, but the selfish actions of a man in a position of leadership within the church that ruined my body. I have found that it doesn’t matter to men in the church—even if a woman was abused and had her virtue stolen, her body remains, nonetheless, a dirty, stained, impure object. So if our bodies are perceived in this way, how can we perceive ourselves as human beings? Are we, as people, only worth the established value of our bodies? Am I a worthless person because I have a damaged body? If I want to feel like I am worth anything it can only be in ways that are unrelated to my body. There has to be a total disconnect, otherwise I have no self-worth. I don’t know where exactly that leaves me though. As an artist this is something that I am trying to comprehend, attempting to figure out through the art that I make. 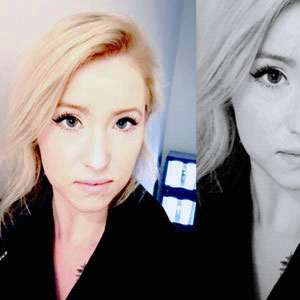 Julia Kirby is a visual artist based in West Virginia, U.S.A.   She is completing her internship in Berlin, Germany, and will return to America to pursue a career in art therapy. 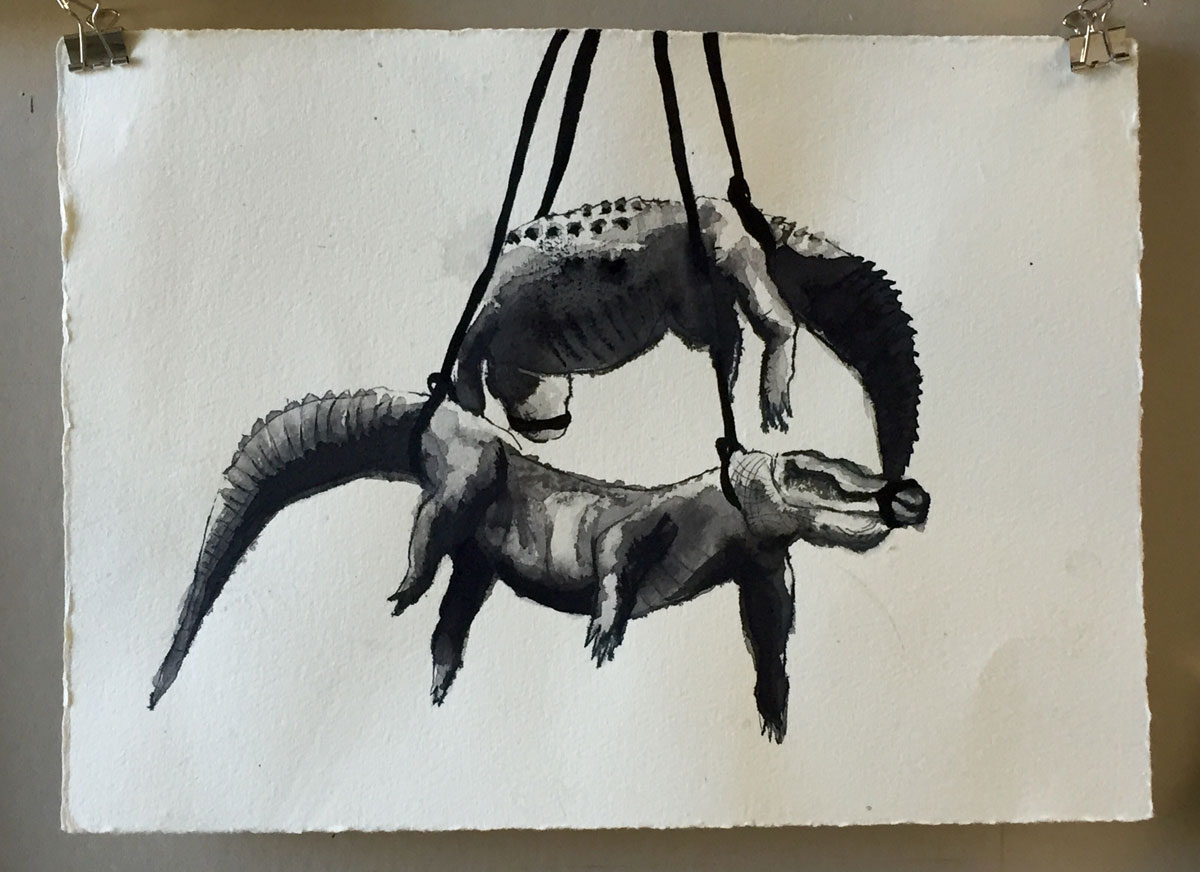 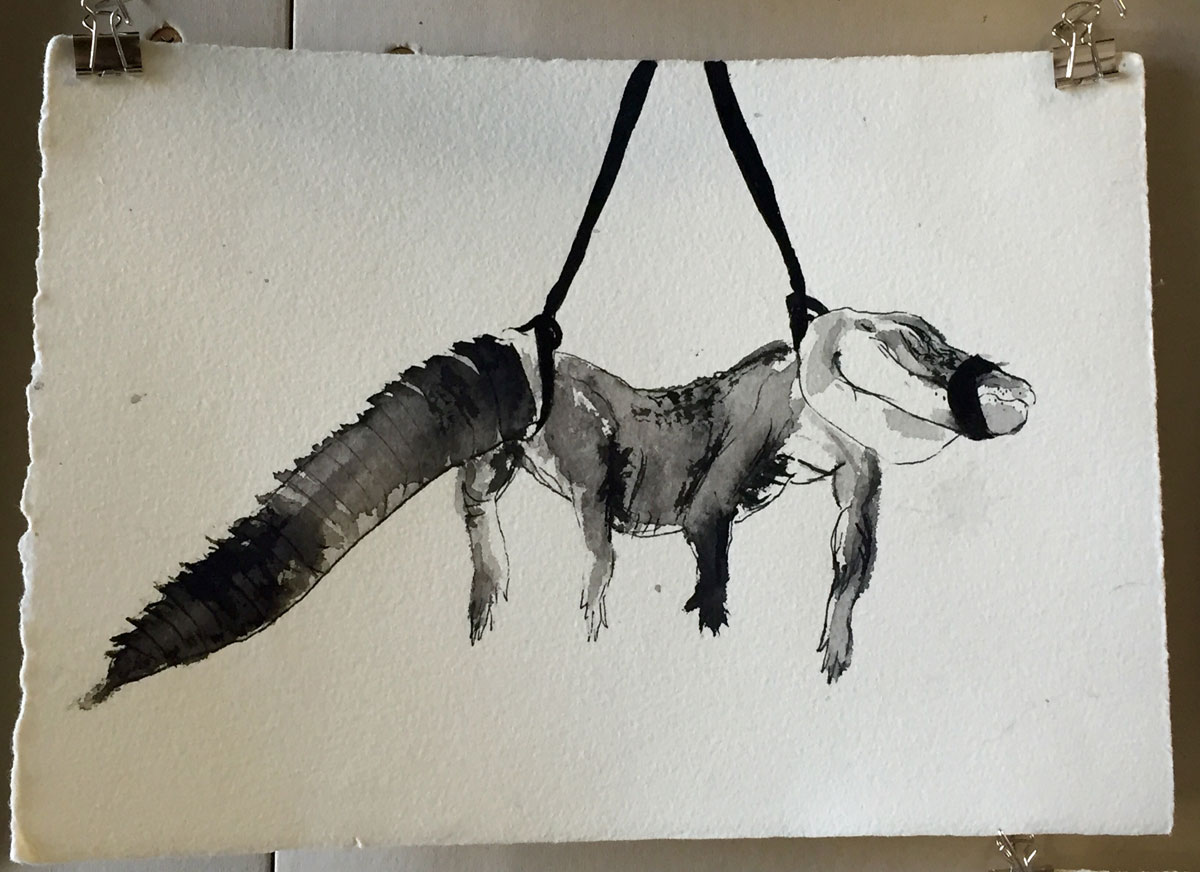 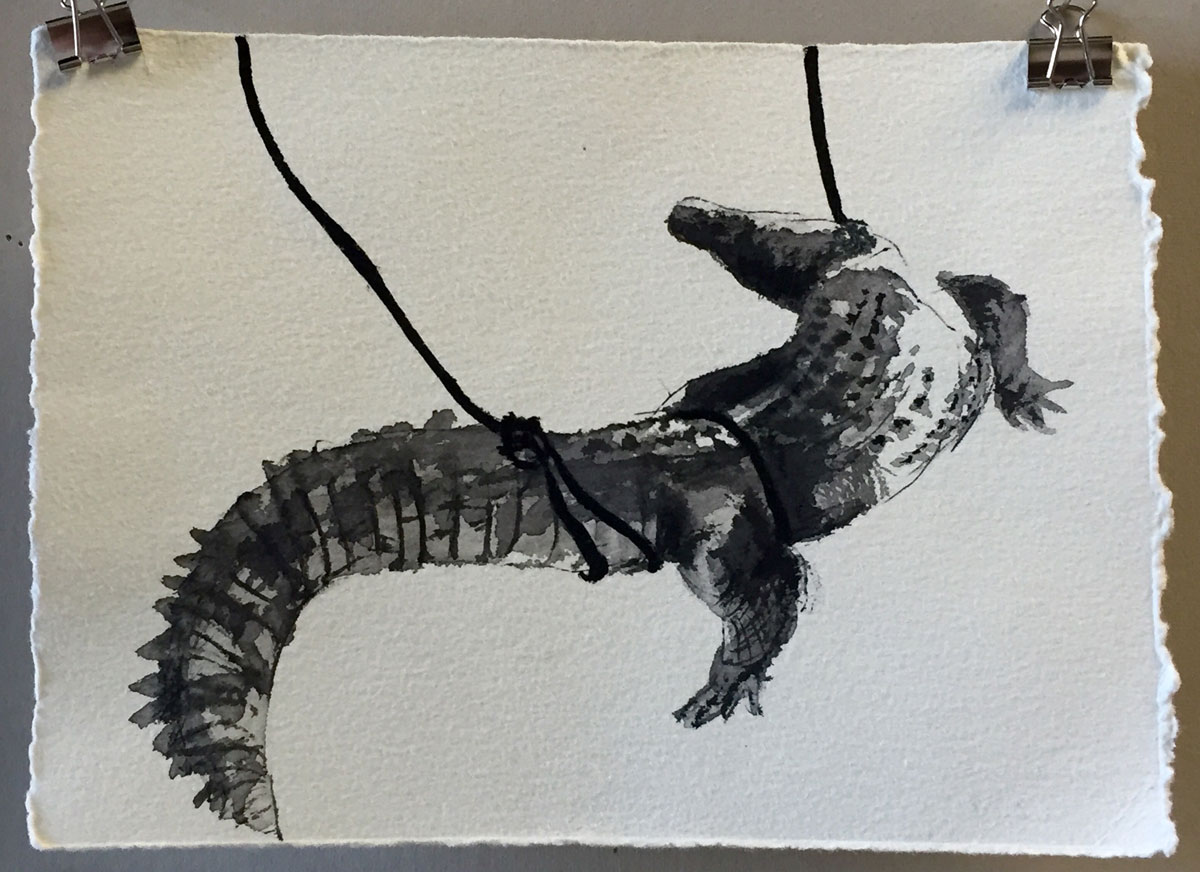 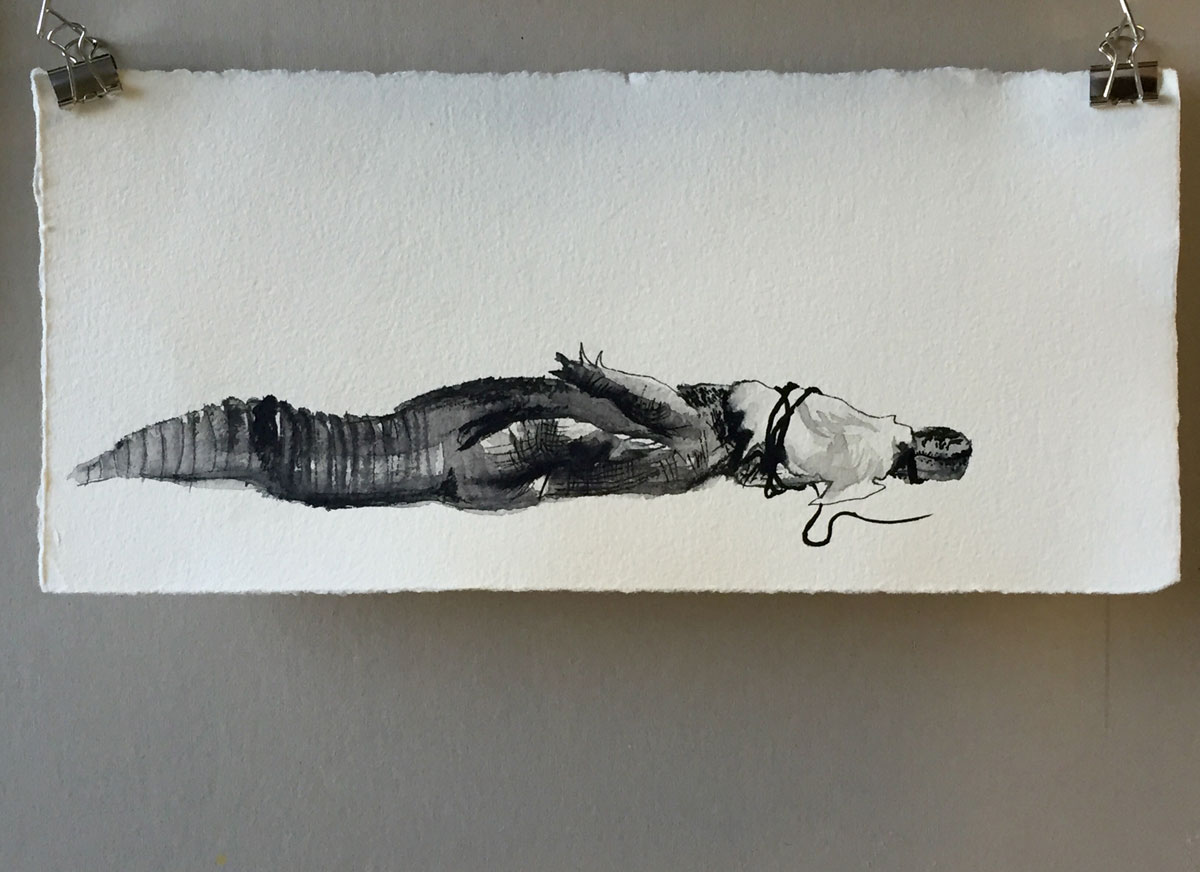 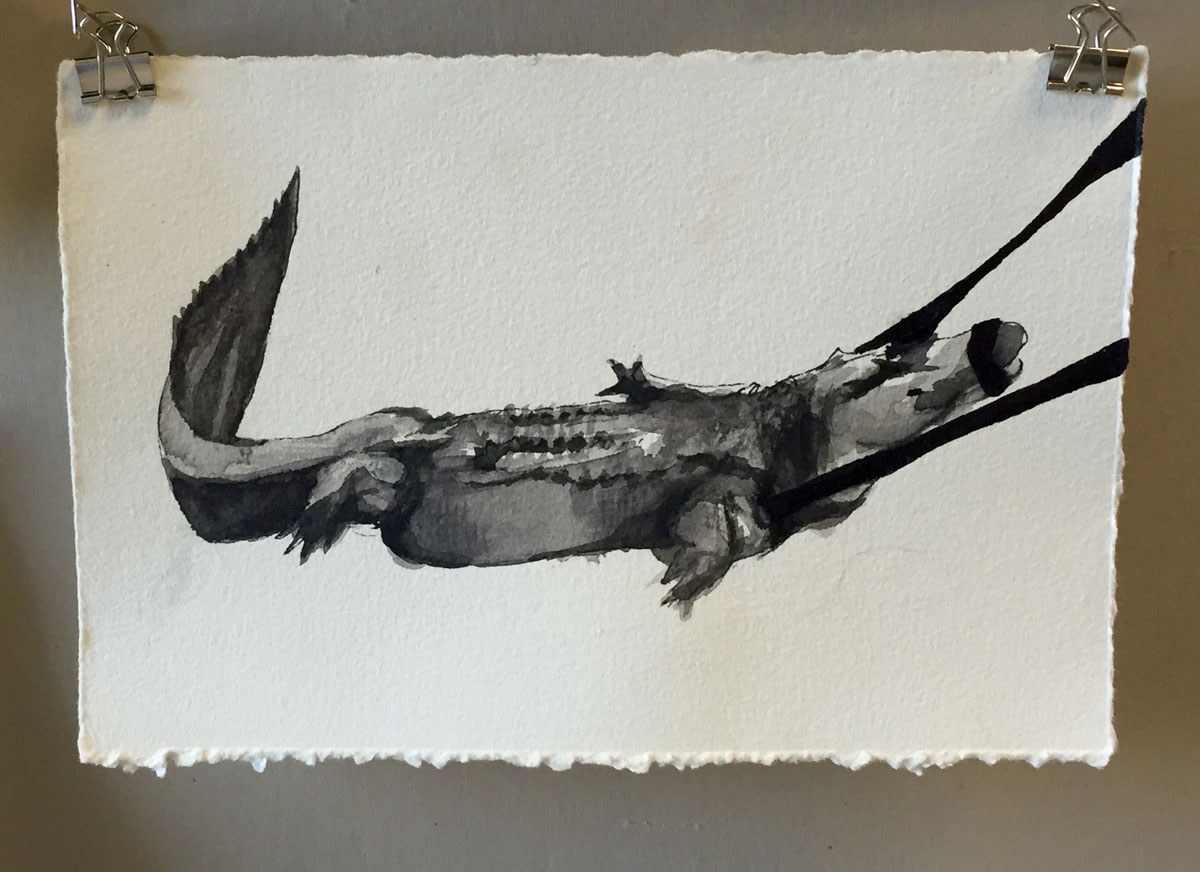 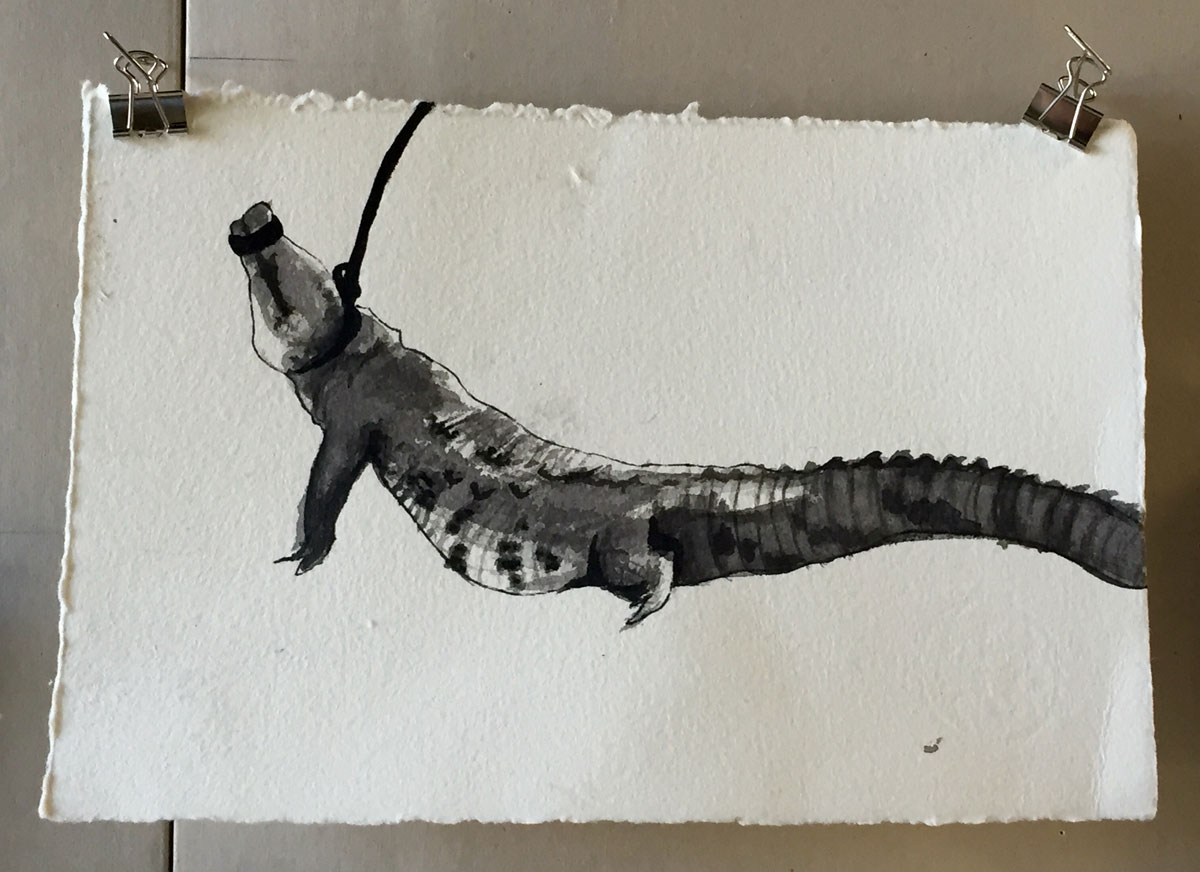 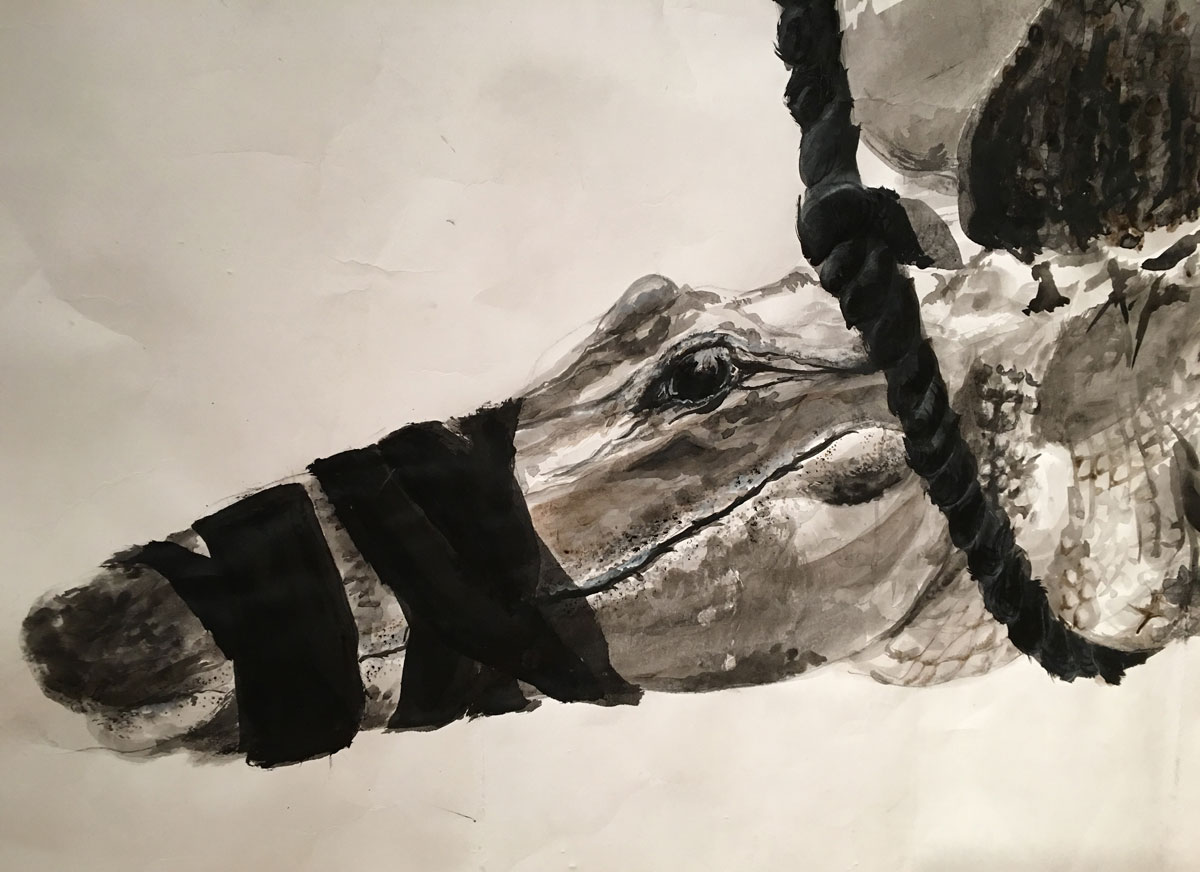 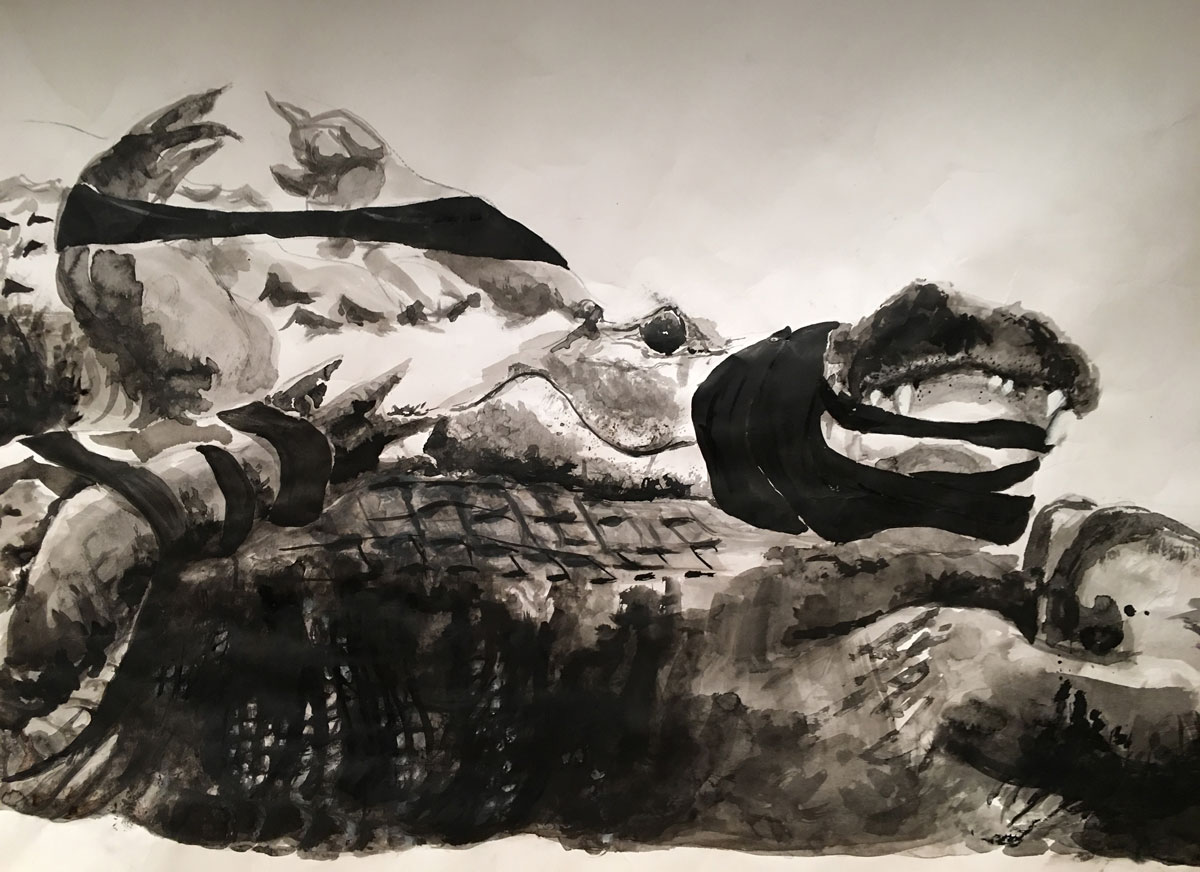 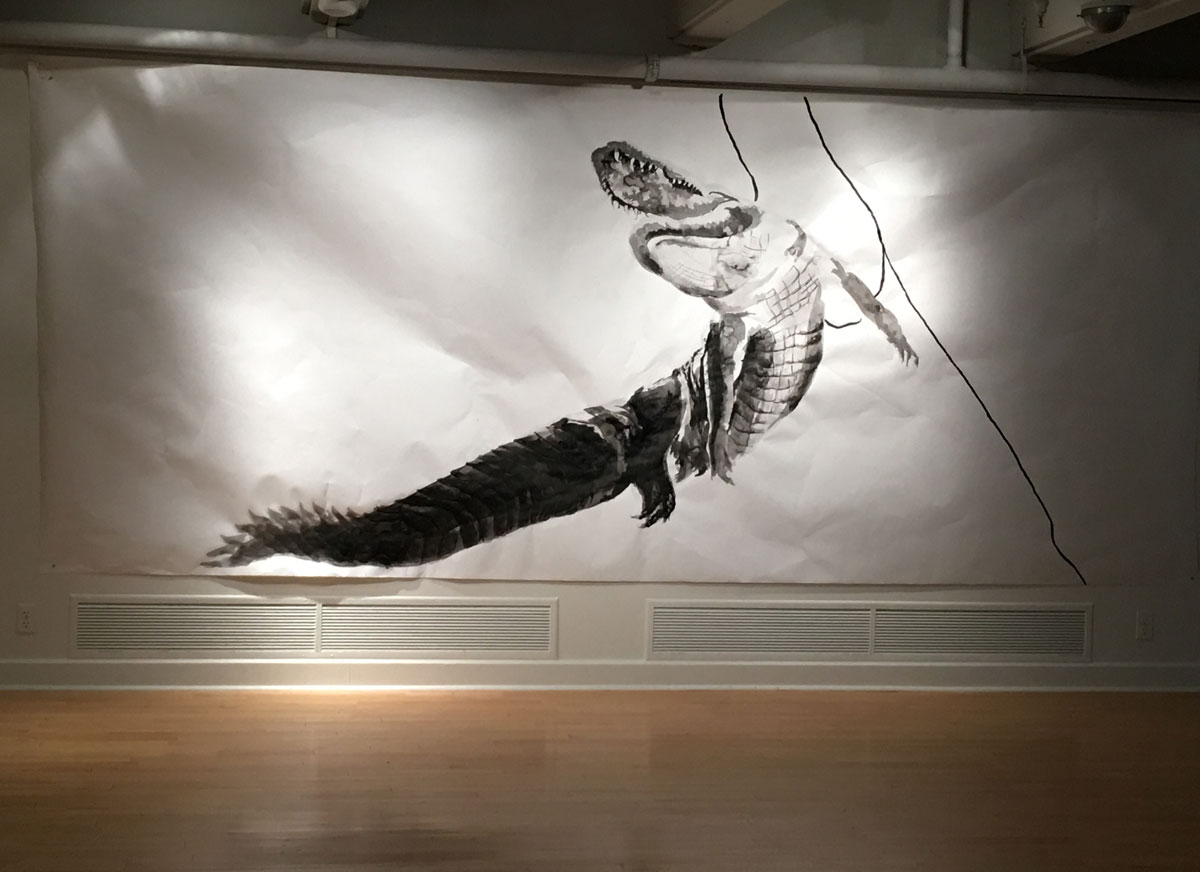 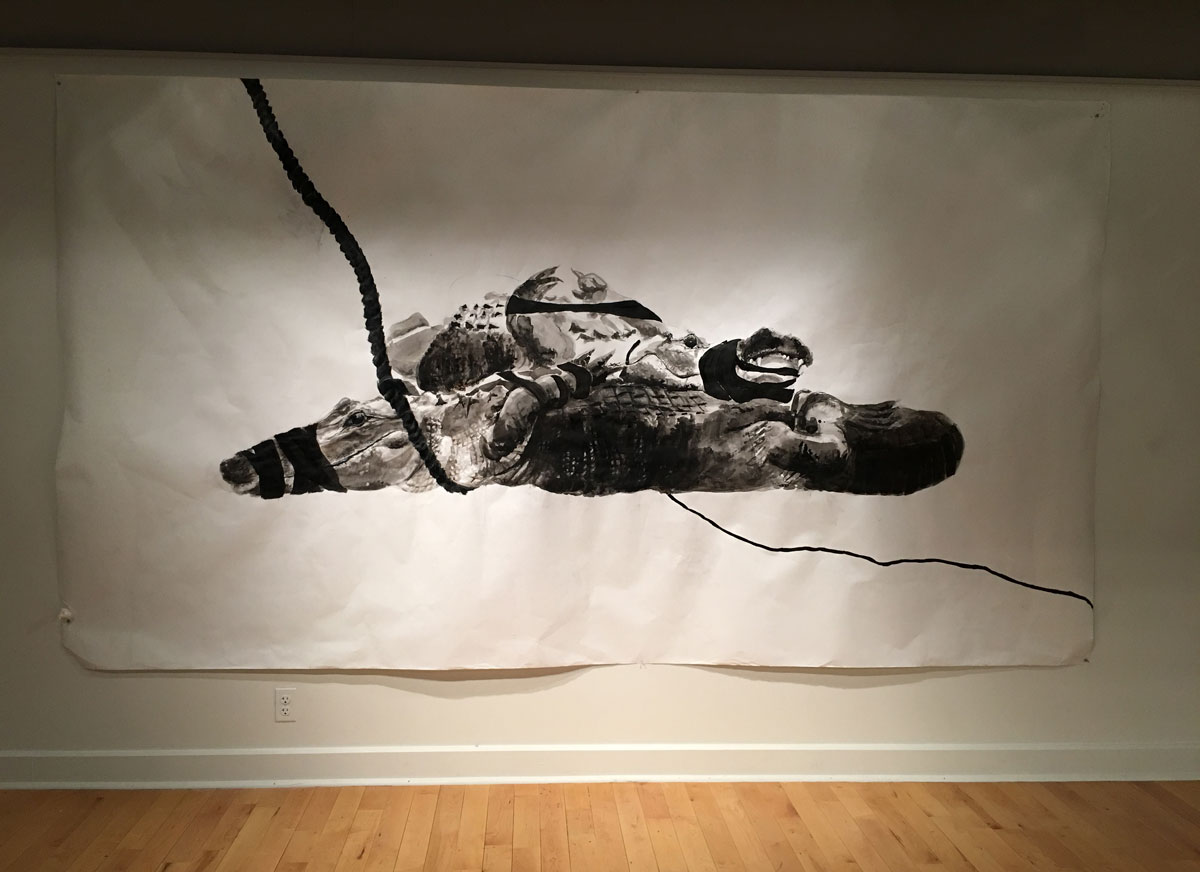 In my drawings and painting of alligators I initially began by focusing solely on how I could use symbolism in my imagery to depict vulnerability and a lack of control. I played around a lot with scale and medium, and eventually found what I felt worked best formally. Using a larger scale, while still holding onto a gestural representation that didn’t allow for a whole lot of control in the mark-making process felt right and made the most sense to me. In the drawings and paintings, both the subject matter and the mark making were essential to the conceptual direction that I wanted them to go in. I have been influenced greatly by the work of Kiki Smith and Enrique Martinez Celaya, two artists that have shown their ability to play off the symbolism behind the creatures they depict, and use mystical and spiritual elements to take their subject matter to a different place.

The alligators in my drawings are animals that were once powerful, dominant creatures, but have been stripped of their ability to control their surroundings. I struggle to understand whether I am personally in the role of the creature or the role of the captor when I make these drawings. Ultimately I think that I will forever go back and forth between the two in my mind. Although I feel like I am just as trapped and helpless as these tied-up alligators, I don’t think that I have ever considered myself to be a creature that had great amounts of power and control. On the other hand, there are also moments in which I want to take away the control and power of someone else, and put them in a position of vulnerability, and that is why as the artist I am the one putting constraints on the creatures in my drawings. It is a pointless and futile effort, but I think that this is what has caused me to become so dedicated to these drawings over the last few years.

In the video with the metal bowl, I am having a dark, black ink poured onto my skin, using water to wash the stain away, and then repeating the process over and over again. In this work I am coming from a place where I feel that I have been damaged in a way that can only ever be temporarily repaired. No matter how many times the stain is washed away it will just keep reappearing again and again. Even after the water has been poured over my hands, they never get back to a state of pure cleanliness.

An important element that has been a part of all of my video work in the past is my hands, which are made very obviously feminine in appearance due to my long fingernails. It is incredibly important to me personally that all of the acts or tasks being performed in my video pieces are by someone who is female. The pain and struggle taking place comes from my own experiences dealing with violence, oppression, and aggression towards women, so it is very important to me that the element of a female hand remains consistent. I don’t expect this to be what everyone would read from the work, but I do feel that my nails have a presence in the videos that is fairly loud and intentionally so.