THE SECOND MURDER OF THE FISH 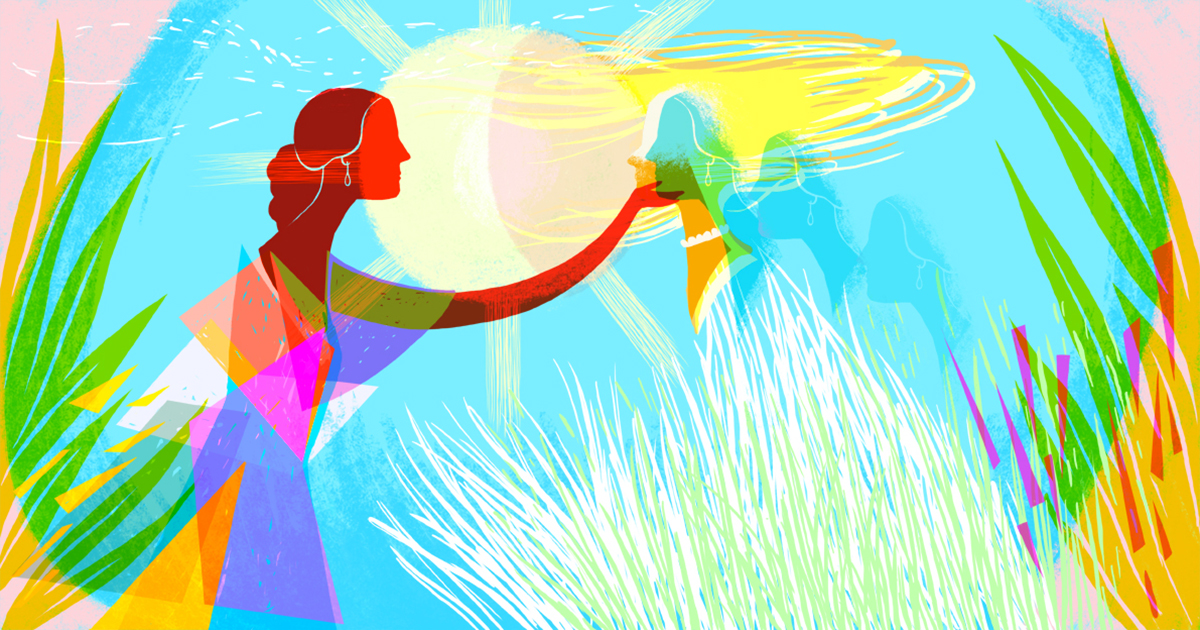 I arrived in Kona International midday and bought a diet cola from the vending machine while I waited in baggage claim. I’d worn my breeziest clothes, beige harem pants and a white cotton shirt. My skin prickled in the air conditioning. I’d spent half the plane ride breathing deeply through my nose, inhaling images of my mother shining in full grace, exhaling all annoyance. But they’d stuck me in the middle seat and now I felt anxious and unprepared and deflated and with half a mind to check into a hotel on the island and see my mother tomorrow. A man in military gear looked down at my chest and smirked — I wasn’t wearing a bra and my nipples were hard — as I wheeled my luggage through the gray doors and into Arrivals.

My mother was waiting for me in front of the Starbucks, exactly where she said she’d be. It wasn’t at all hard to find her. We hugged. Her skin was mother and warm and wonderful and disgusting. She held my upper arms tight with her hands.

Breeze. Grace. Curtains. I was not curtains. I shut my eyes and opened them.

“I’m turning around and going home right now if that’s how you greet me after a twelve hour plane ride in the middle seat between two obese men.”

Did I talk with anyone else like I talked with my mother?

“I’m sorry, Fran. Let’s start over.” She held out a hand for me to shake. I took it and the diet cola fell out of the crook of my elbow and onto the floor.

I unfolded the white sheets my mother left on the sofa for me and threw them down on the mattress. She rented a spare room in a family’s one-floor bungalow, but I was too tired to introduce myself to the voices that flowed in like wind on curtains from another part of the house. I told myself they were busy, too, going about their days. From the window I could see the tall grass and the Big Hill, the place I knew from my mother’s picture messages. I would get to the bottom of this mother thing, I would, but first, I needed to take a walk.

I could hear the waves crash from over the hill. Hawaii was dry where I’d imagined lush grass and hibiscus nectar. I was scared of snakes but I liked the way the tall grass rustled, the way the sun seemed to shine in the chirps of birds, the low hot heat and the yellow smell. I walked on and on through the grass, nodding to a naked man and his brown dog, until I reached the shadow of the hill. I climbed up. It was flat, shadowless, all color, like the advertisements section of a newspaper. I was surprised at how winded I was, but the hill was steep, and at times I was almost walking on the hands and feet at the same time.

But it was worth it when I came to the crest. The blue waves crashed down over white sand and pink flowers and the wind swirled around me. I stretched my arms out like the Titanic, like Jesus on the cross, like a shooting star. The wind rustled my hair and the sky was clear. I’d come to Hawaii, just like that, I’d clicked a button on the computer and I’d driven myself to the airport and just like that I was here.
Back home I unpacked, folding my small pile of clothes against the living room wall. I found the fresh, new notebook I’d packed and my favorite ink pen. In dark, black letters across the top of the page I wrote a heading: December 2016. Mother Notes. I would approach this mystery like a detective approaches a murder case. I sat there on the sofa in my white sports bra and fanned myself with the notebook. What was wrong with us? I picked up my pen.

A thin white gull dove forward and stuck her beak into the sand ahead of us. When she came up empty, she unfolded her wings like the messenger Gabriel and fluttered them, hopping forward a few feet.

After a few tries, we’d figured out a beach rhythm that suited both of us. Late morning, early enough to still be cool enough for my taste and warm enough for hers. Our towels almost on the darker, wetter sand, but not quite. Me with my book, my mother with some podcast or another.

Today was a hotter day than yesterday.

“Can you sunscreen me?” my mother asked.

I dreaded this. She wore a kind of zinc-based sunscreen that could never be rubbed in enough to make the ghostly whiteness disappear.

The bottle made a farting noise when I squeezed out the lotion. “You’re running low,” I said, rubbing my hands together and sticking them flat against the backs of her shoulders. We looked alike, everyone said it, but she was so much more delicate than me. I had inherited my father’s ox bones. I worked my way down her back. My mother’s skin was like a lizard’s and tingled on my hands. I moved aside the blue straps of her bathing suit to reach the skin underneath. I spent so much energy on moving gingerly around her, not wanting to touch her too much, too softly or too kindly. The sun was shining in my eyes. The waves crashed. It seemed to take years to cover her small back in sunscreen, but I did not want to be blamed if she burned.

When she turned over and looked up — I may have been imagining it, I may well have been — her eyes were red and watery. I brushed the sand off my knees and moved back to my own blanket.

“Are you going to go swimming?” I asked.

“When the sunscreen dries.”

“You always say that,” I said.

She looked at me.

“I’ll go swimming when my sunscreen is dry.”

I threw my arms up in surrender. The waves were crashing. I wanted to be wet. I shook the sand off my towel as I stood up and walked down the slope, scanning the ocean’s horizon for shark fins or swarms of birds. When there were none, I waded up to my ankles. I bent at the knees and jumped up and in. Down and under.
In the afternoons my mother went out to work for a few hours at the hotel. I mostly stayed around the house, making coffee and reading, sometimes walking for the hill, once making the half hour walk to the beach and swimming alone. When I was home I watched the mother and daughter with fascination. They were content to share their one room, sleeping back-to-back, eating breakfast lunch dinner breakfast lunch dinner together. It wasn’t until the third day that I talked to them.

The mother—Iolana was her name, the daughter was called Penny—turned on the shower and shut the bathroom door behind her. Penny came out from her room and sat down, just like that, right next to me on the couch.

“Hello,” I said back. She smiled. “What are you doing today?”

She shrugged her little shoulders.

“Go looking for shells,” she said. Before I could answer she was up and walking towards the bathroom, opening the door (the handle was at her eye level) and stepped inside. Laughter barely echoed out, buffered by the door and the steam. Collecting seashells on the beach suddenly seemed like the most exciting thing in the world. I vowed to go out again once the afternoon heat backed down.
The fish was silver and scaled and watched me with intent. We would cook together on my last night, and I was faced with the task of cleaning a fish while my mother picked up fresh vegetables from the market.

I did not want to murder him again. I thought once was enough. But the sun had made its way deep inside me. I no longer had a brain and organs, I was filled with tall grass and light the same way I could be filled with rain on a Tuesday in my living room. The second murder of the fish flowed gracefully from my shoulders to my wrists to my hands to the knife into his gills and his scales until he was two filets, no trace of animal, just dinner. My mother returned with two long green peppers and we lit the grill.

I had been watching us, been watching the mother and daughter in the other room, and I was ready with my questions. She poured wine and then I was filled with not just tall grass and light but also rotten grapes and sweetness. I had come so far from my body that I could ask anything.

“Why is it so hard for us to talk?” I asked, sat down outside at the small plastic table by the grill.

“We know each other too well,” she said. “We know what the other person means with such certainty that we have no room for doubt. We have become furniture to each other.”

I poured us each another glass of wine.

“What do you think of my life?” I asked her.

“What do you think of mine?” she asked me.

“I think you are happy,” I said. What else could I say?

“I think you aren’t,” she said. It rolled off me like oil on water.

“You should do something,” she answered.

“You will still die.”

I will still die. I will always die. I am tall grass and sunlight and wine and I have never not been dying. The sugar of grapes and the deep dark sweet of wine is something very different. Young grapes will only dry and leave me lonely. I must reach for the depths of wine. I must become drunk on my own death.

It was dark now, I could hear the cicadas and a night bird and the mother and daughter and the television laughing together from behind a closed door. 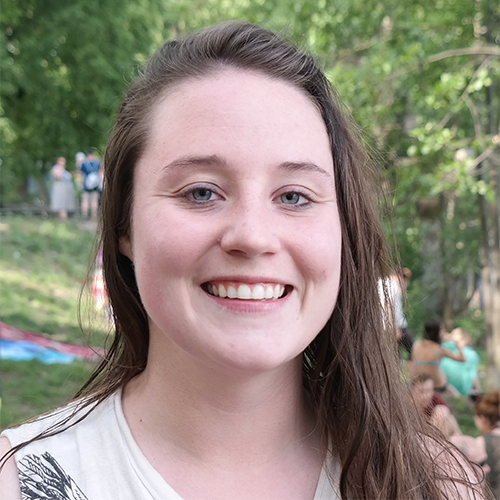 Anna Geary-Meyer lives in Berlin, Germany. Her fiction and poetry can be found around the internet at Unbroken Journal, the Olentangy Review, and CHEAP POP Lit. She was a finalist in the 2017 Bath Flash Fiction Award and in The Reader Berlin’s Summer Short Fiction Competition. She organizes and co-hosts Queer Stories at Another Country Bookshop and her backyard is a cemetery.
Larisa is an animator and illustrator based in Berlin, Germany. After her degree in Design at the Berlin University of Arts she worked as animation and layout artist  for children´s films. In 2014 she realized a long-standing ambition and finally started to illustrate. 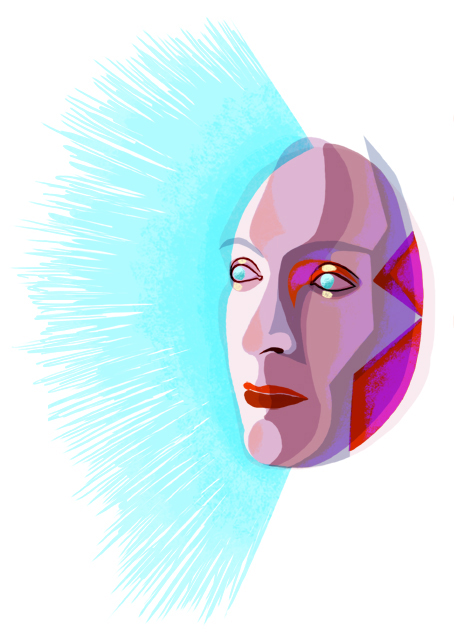